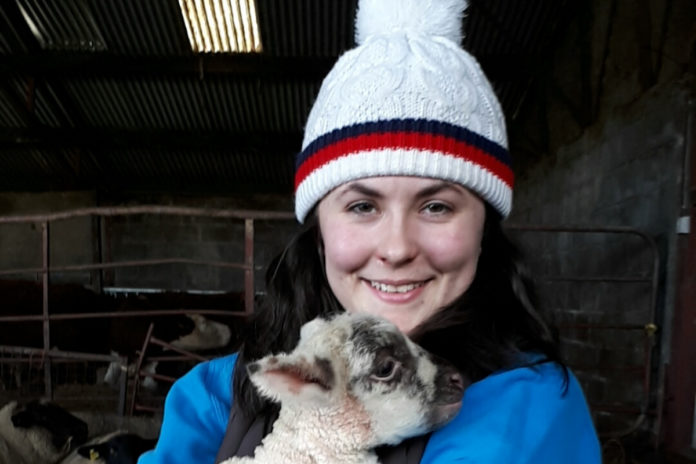 ‘I can be found driving tractors, moving livestock or cleaning sheds’

When in fifth-year, Aoife Hennessy (22) had her heart set on pursuing a career in physiotherapy or sports science.

With courses earmarked for her CAO application, she later realised that she had a real passion for agricultural science, a subject she was studying for her Leaving Certificate.

“It was my first choice as I believed that it was a course that could lead you in any direction of the agricultural industry.” she explained to Catherina Cunnane, editor of That’s Farming.

She enrolled in the four-year degree programme in 2016 and completed this in May 2020, attaining with a 2.1 honours degree.

“I thoroughly enjoyed the course and I would highly recommend it. I gained a lot of information about many aspects of the agricultural industry from servicing tractors to food traceability and bioanalysis.”

“I am a member of the Agricultural Science Association (ASA) and I chose to partake in the mock interviews which were run on campus. I was a joint winner of my category which was a teaching role.”

As part of the course, she had to undertake work placement either on a farm or in industry. “I chose to complete mine in industry as I decided I could choose to work on a farm after I leave college, whereas I might as well get a taste for the industry side of agriculture.”

She completed her placement with The Cooney Furlong Grain Company, where she gained an insight into agronomy whilst walking crops with one of the company’s agronomists and attending events.

“I also got to experience working behind the counter and dealing with customers in a local branch and soil sampling.”

“After I completed my placement the company decided to keep me on, and I got to experience what it’s like to be on the other side of the counter at a grain intake.”

“When exams were over, I felt there was no feeling of completion like other years because we had been at home for so long.”

“It took a bit of time to get used to the feeling of finishing college. Even finishing of the final year projects was a challenge as some students had lab work to complete when the college was closed.”

“Luckily, I had my lab work for my final-year project completed the week beforehand.” She added.

With a degree adding another string to her ever-expanding bow, Aoife now divides her time between her job and the running of the 130-acre mixed farm, with her uncle, James, and grandad, Paddy.

“As far back as we can find in our family tree, my family members have been either farmers themselves or working on big estates.”

“My favourite memory has to be purchasing my first cow and calf. I made the investment after my communion and kept the cow for several years after, selling the calves every year. Ever since, I have had animals of my own.”

In the past, the family farmed suckler cows; however, due to the labour-intensive nature of such enterprise, they switched to a calf-to-beef system.

The farm currently consists of 50 Suffolk-cross ewes and a Charollais ram and tillage crops as the last of their heifers were sold earlier this summer.

“The plan is to purchase weanlings this time rather than calves to cut costs. We increased the number of ewes we had early in the mating season and hope to have a Suffolk ram lamb soon to help compact the lambing season. I own the latest of the ten Suffolk ewes that have joined the flock.”

They grow winter and spring barley along with fodder beet, with wheat and oats produced some years. The family is exploring the option of using beans as another crop next year. “Fodder beet is fed to our cattle and sheep during the winter months. We wash and chop the beet that is fed to cattle.”

“The tillage side of the farm is probably my favourite. Walking the crops during the growing season is a task that I enjoy doing.”

“The tasks that I must do on the farm vary week-to-week. I can be found driving tractors, moving livestock or cleaning sheds.2

“I could be told to go plough or roll fields, haul grain to local grain store, spray crops, spread fertiliser, the list is endless.” Aoife laughed.

Satisfied in her current role, Aoife relishes the ideas of travelling at some stage, perhaps to Australia or America to a large-scale tillage farm.

“I thoroughly enjoy working on the farm and my current job with The Cooney Furlong Grain Company. I have learned a lot in the twenty months that I have been with the agri-trading supplier and I look forward to the future ahead.” Aoife concluded.