That's FarmingThat\'s Farming Irelands Largest Farming News, Properties and Classifieds Network
HomeDairy‘I am happiest in the parlour or sitting behind the wheel of... 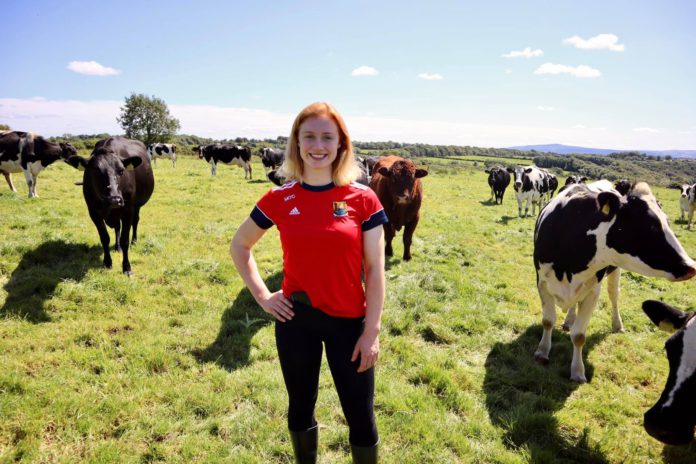 She secured a position on the 200-cow dairy farm of Richard O’Sullivan and continues to assist her parents with the running of the family dairy enterprise.

“Due to the global pandemic, I was unable to sit my Leaving Certificate. While this would have been a major problem for most students, I felt it worked in my favour as I would much prefer to be ploughing fields than ploughing through books!” she explained to Catherina Cunnane, editor of That’s Farming.

Maeve has places primary school teaching as the first choice on her CAO application, however, everything will depend on next month’s results.

“I would love to stay at home farming full-time, but my mother is encouraging me to go to college first.”

“I help my parents, James and Mary, run the family farm. My brother, Barry, studied law in college and is doing further study in that area.”

“My brother John was a jockey and farmed part-time but tragically was killed in a car accident three years ago.” The farm, Gardeen House, located on the edge of the village of Lismire in the heart of North Cork, has been in the family for three generations.

Maeve’s grandfather had a suckler herd from 1980 to 1987 before the family converted to dairy.

“Our farm was not included in the Disadvantaged Area Scheme. As the suckler grant was small at the time for those in the non-disadvantaged area, we converted to dairy farming.”

“The milk quota system applied at this time but it was difficult to access quota in our area as our local co-op was small.”
They had a six-unit Herringbone Dairymaster milking parlour which could accommodate 52 cows.

In 2015, when the milk quota system was abolished, the family doubled their cow numbers and upgraded their parlour;100 Holstein-Friesian and Holstein-Friesian-Jersey-cross cows now pass through a twelve-unit Dairymaster parlour.

“We keep all our own calves and sell them as weanlings. Most sales take place in the yard with the odd few going under the hammer at Kilmallock Mart.”

“The most enjoyable aspect of farming for me is milking – when I look at the jar and see the milk going through, I know I’m making money.”

“My favourite time of the year is summer as I love silage time. I enjoy wrapping bales while my father is baling.”
“I’m the kind of girl who is always looking out the window, hoping a tractor will pass.” Horses and other interests

In addition to dairy farming, they O’Connors also breed horses, a tradition that was started by her grandfather, who bred thoroughbreds.

“We have three-quarter-bred horses at present. I enjoy hunting with the Duhallow Foxhounds and the Kerry County Hunting Club.”

“From an early age, I took part in several competitions. I competed in inter-schools showjumping, coming home in third place, I hold county, Munster and All-Ireland medals in Athletics and I was awarded the title of Athlete of the Year for three years in-a-row, as a member of Gneeveguilla Running Club.”

She has competed in the BT Young Scientist competition on two occasions. The first year she focused on rural isolation and seclusion in the farming community.

“As part of my project, I devised an app to combat this problem and received the Hewlitt-Packard Award and also won in my category.”

“The second year I studied solanine in potatoes and how I could remove the gene causing them to become poisonous.”

“I spent many months in UCC doing experiments using CRISPR CAS9. I won in my category and also won best communicator in the entire competition.” added Maeve who played U14 and U16 football for the ‘rebel county’. Women in ag
The most challenging aspect of farming for Maeve is having to prove herself to some male counterparts in the sector. “When you tell someone you milk cows, they tend to do a double-take!”

“Even today, I feel there is a reluctance within the agricultural sector to accept women farmers on an equal basis.”

“Farming is a very physical job and it takes dedication and hard work, but you are your own boss. I would encourage any girl to take up farming if she is passionate about it.” Looking ahead, Maeve hopes to travel overseas to New Zealand within the next two years to experience farming on a larger-scale.

“When I’ve finished college, I would like to travel to America and visit Texas as I am a huge country music fan and I enjoy the odd jive!”

“In time, I would love to farm full-time as I am happiest in the parlour or sitting behind the wheel of a tractor.”

“My father is a hugely inspirational figure in my life when it comes to farming, he is always around to answer the endless amount of questions I ask.”

“To anyone who is unsure about agriculture and what people might think, I would say to them that it is time to stand up, forget about everyone else and do what makes her happy.” she concluded.