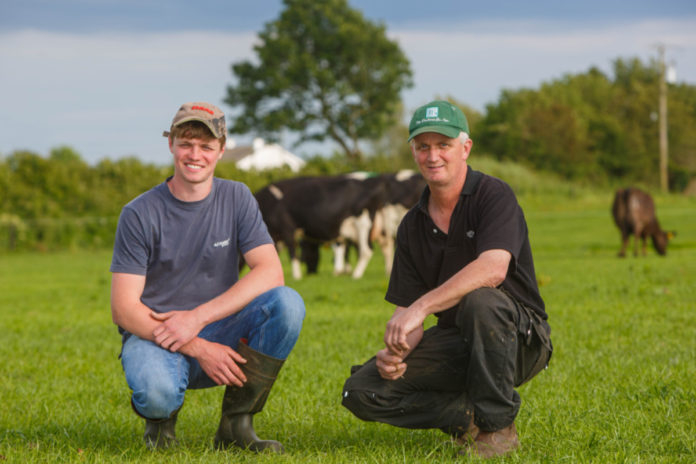 Switching from 80 sucklers to 150 dairy cows

Situated just outside of Tullamore in Co. Offaly, 25-year-old Danny O’Brien and his father, Donal, formed a farm partnership in 2017, in preparation for the transition to a dairy enterprise the following spring.

Donal grew up on a calf-to-beef farm and continued his father’s legacy, rearing calves for beef, along with a suckler herd of 80 cows.

With a keen interest in farming from a very young age, Danny too wanted to uphold the family farm: “I always had a great interest in dairying, and I wanted to stay at home farming.”

“The only option that would allow us to get two incomes out of the farm, was to convert to dairy,” Danny explained.

He completed a level-six dairy herd management course at Gurteen Agricultural College, in 2015, just before the abolishment of milk quotas.

Setting up as a new entrant

The first step came in 2016 with the purchase of 60 heifer calves. Fast forward two years and the O’Brien farm partnership was going strong, milking 80 animals in a 16-unit, Gascoigne Boumatic parlour – mostly high-EBI Friesian heifers, with a small number of cross-bred Jerseys.

As a new entrant, asking for guidance and accepting advice from qualified advisors and others experienced dairy farmers is vital.

Having worked as an AI technician for Progressive Genetics for four years, Danny had plenty of exposure to the various systems across the region. “Don’t be afraid to ask for advice from the likes of Teagasc and visit other dairy farms to get ideas.”

“Joining discussion groups helps you become part of the local network of dairy farmers. When I was on the road AI’ing, I got a great insight into how other farms operated.”

Selecting the correct dairy stock is paramount to the overall success of the enterprise. Danny very much echos these views, “It is very important to spend extra time and effort choosing the right stock.”

“If you are getting up early to milk, you want to be milking the right ones. They are going to be there for a long time hopefully, along with their offspring.”

“It is going to be the foundation of your herd. Give yourself the best start that you can.”

Like all beginners, the O’Briens learned a lot in their first year of milking. “2018 was a tough year to start with. Between bad snow in the spring and drought in the summer, we were lucky we weren’t overstocked and made it the second year.”

“Although we were well prepared with building and breeding, we didn’t have enough work done in the fields – paddocks weren’t set up properly and we quickly realised that the outdated water systems were not up to scratch.”

“If I was to do it again, I would have started earlier working on farm infrastructure, like roadways and fencing. It’s better to have this sorted ahead of the wet weather.”

Satisfied with the overall performance of their young herd, Danny is happy to report on a good milk yield and quality. Sharing some of their 2019 results, it is onwards and upwards for these new entrants: “In 2019, the herd average was 460 kg/ms.”

“We run on a 12-week breeding period and hope to calve from February 1st until the end of April. I AI the cows with dairy straws for 6 weeks and use Hereford, Angus and Belgian Blue, thereafter, as all calves are kept as dairy replacements, or finished for beef.”

With the non-stop nature of spring on a dairy farm, the O’Briens are open to trying new technology, as well as age-old advice: “We are managing without calving cameras for the minute, but I definitely see the benefit in them.”

“During calving times, we feed the cows last thing at night which results in very few cows calving during the night.”

Currently milking 150 cows and as the hosts of Teagasc Grass 10 course in the Offaly/ Westmeath region, grassland management is taken quite seriously on the farm.

“Grassland management is very important. You can identify the paddocks that are performing best, in comparison to the underperforming paddocks; where you might need to address soil fertility, or consider reseeding.”

“You know exactly what you have. You can budget for the grazing season; if you see that you have too much grass, for instance, you can take out the surplus as bales.”

“Similarly, if you haven’t enough grass, you can supplement them with buffer feeding etc. As soon as I started measuring grass, I saw the benefits,” he concluded.