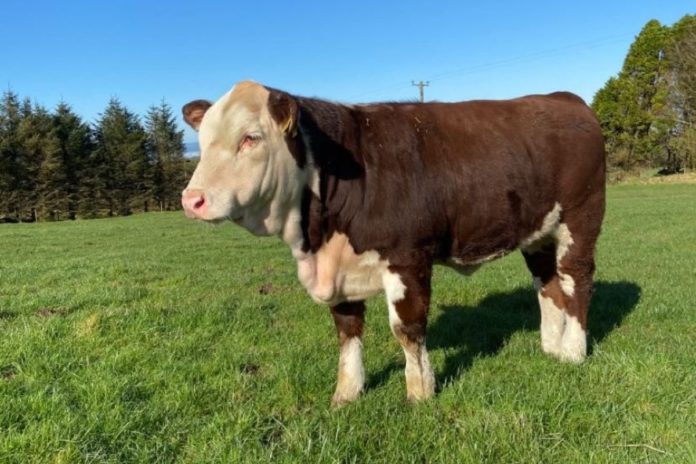 The Irish Hereford Breed Society has moved to introduce new rules around Hypotrichosis testing for its premier sales.

As of October 2022, all entries – males and females – that breeders enter into both the spring and autumn premier Hereford sales must be Hypotrichosis Free (HYF).

The society has issued documentation regarding the genetic defect and new testing requirements to breeders in recent weeks.

“We are just introducing the requirement that all bulls and heifers entered into the premier spring and autumn sale must be tested HY-free.”

“This is a way of introducing breeder to the idea of testing for the traits and making them aware of what this genetic defect is but also a way of enhancing the premier sales and hopefully encouraging more breeders from the north & UK.”

What is livestock Hypotrichosis?

According to the letter seen by That’s Farming, Hypotrichosis is a genetic defect in Hereford cattle and several other beef breeds.

Hypotrichosis is a congenital condition in cattle that comprises the partial or complete absence of hair follicles, with or without associated developmental defects.

It expresses itself as a complete or partial loss of hair. Calves are often born with no hair but will grow a short curly coat of hair with age. Furthermore, a recessive gene causes hairlessness.

According to a factsheet from the Ontario Ministry of Agriculture, Food and Rural Affairs, impacted animals are prone to environmental stress, and skin infections are “more prevalent”.

It also states that such abnormalities may result from environmental and genetic causes, with the latter being more “complex to correct”.

According to the MSD Vet Manual, at least thirteen types of hypotrichosis have been described in cattle, impacting the following breeds (not limited to those listed below):

When is Hypotrichosis a major problem?

The chances of the progeny being Hypotrichosis carriers (HYC) are “much higher” in this instance.

Currently, Weatherybys carry out testing for this trait, among others, using the genotype chip produced from the hair sample already provided for genotyping for sire verification.

When the lab has completed the test, it will denote results as either:

An IHBS spokesperson said: “The lab carries out these tests once every month, so it is important for breeders to organise testing early.”

“Please contact Weatherbys direct with the details of the animal to organise testing,” the spokesperson added.

You can contact Weatherbys by phone at (045) 879 979. The cost for testing Hypotrichosis alone is generally €10/per animal, but this is subject to change.

The society advises breeders to adopt a testing programme if they are concerned about an animal or a particular bloodline that may be HYC.

As they pointed out, other genetic defects potentially impact the breed, and three that could “arise as an issue in the future, include:

“These combined with Hypotrichosis, are ‘four traits’, and Weatherbys can test for all four traits.”

“Depending on when the animal was genotyped, the current chip from that genotype may suffice. Alternatively, you may have to provide a new hair sample to the lab to carry out testing for all four traits. The cost for all four tests may vary.”

- Advertisement -
Previous article
Irish seller pockets over €5,200 for sheepdog in Skipton
Next article
What sheep breeds are best suited to organic farming?