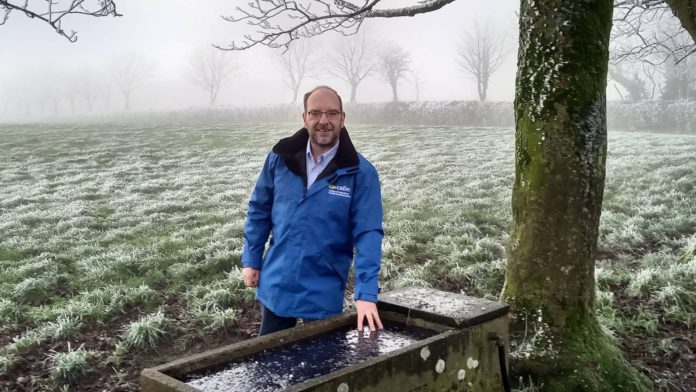 How to prepare for winter frosts on dairy farms

It’s not just simply the protection of pipes and drinking troughs from the frost but also protecting milking parlours and other equipment as well. It is often when the thaw starts you see what damage has really been done.

Last weekend, we saw the first real frosts of winter 2020-21. At this busy time of year, events around the farmyard are your focus, but have you turned off water supplies to the drinking troughs around your fields?

It can be easy to overlook and should frost cause a leak it might be several months before it is discovered, leading to a substantial water bill.

The daily water intake of a dairy cow is dependent on yield and dry matter content of her diet. At a peak milk yield of 40 litres, water intake could be as much as 120 litres per cow per day at this time of year.

For the majority of autumn-winter calving herds, there is a huge daily demand for water. If drinking troughs freeze up for more than 3 or 4 hours, it can have a major impact on milk yield. Pipes close to the entrance of a shed or along an open side are particularly vulnerable.

Troughs, where there is a high demand for water, don’t generally pose too much of a problem. The majority of problems occur in calf houses or calving pens where there tend to be drinking bowls and smaller troughs.

To avoid the winter freeze, pipes should be buried underground and insulated where exposed. Pipes with running water rarely freeze so it may be an idea to let a nearby tap trickle gently to prevent freezing.

In modern sheds, such as the new Greenmount Dairy Unit, small water bowls have a thermostatically-controlled heating element to avoid the winter freeze.

In modern dairy units, milking parlours are larger and generally, part of the cowshed so are more difficult to insulate than older parlours.

Nevertheless, body heat from cows can have beneficial effects in maintaining the temperature of the building, as long as the parlour is protected from exposure to cold air coming in from outside.

How to prepare for winter frosts on dairy farms

As a general precaution, keep doors to the parlour and plant room closed. If necessary, shield with plastic sheeting or insulation material and fit a thermostatically-controlled heater for when the temperature falls below 10°C, especially in the plant room.

Precautions against freezing of the milking parlour and equipment should centre round draining pipes to reduce the risk of ice forming.

Parlours should be designed so that they can drain easily. Running them a little bit longer than usual will ensure excess water is removed from the plant after the final rinse, and opening the line at low points such as the filter sock or base of receiver jar will aid this.

Removing the jetters from the cluster claw pieces and letting them hang down to drain the water also helps.

Be prepared for winter by ensuring adequate and effective insulation of pipes and troughs in sheds and in fields, and don’t forget the parlour and dairy.