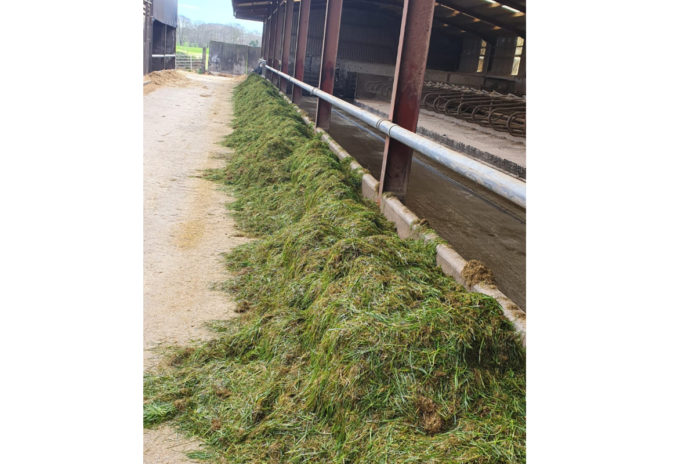 The Jackson farm is located on the outskirts of Bangor, Co Down where Stephen Jackson manages 260 dairy cows and young stock, alongside his father, David, and two other full-time employees.

The farm is well-established, with a gradual expansion in terms of area farmed and rising cow numbers in the last decade.

Conail Keown, a dairy adviser at the College of Agriculture, Food and Rural Enterprise (CAFRE), has noted that the efficiency of milk production is central to the business.

He has also highlighted some of the key areas that the Jackson family have focused on with the overall aim of improving the dairy margin and total farm profit.

He said: “Total production on the farm has generally increased in the past decade due to both increased herd size and extra production per cow.”

Currently, dairy cows are producing 10,500 litres each year with milk components at butterfat 3.82% and protein 3.28%. In terms of milk solids, 767kgs are produced per cow.

Purchased feed level of 3,900kgs per cow was fed during 2019, which equates to a purchased feed rate of 0.38kg/litre of milk.

“In January, while planning for the year ahead, Stephen was determined to take more milk from grass in the production system.”
“The plan was to continue making top quality silage with a five-cut system. The zero-grazer was also to stay, albeit to a lesser extent, and to improve the grass quality brought in with the zero grazer.”

“The significant change this year was to bring grazing back into the herd system where it has been missing the past few years.”

The objective on the farm, the farm adviser added, is to build resilience and ultimately lower purchased feed cost brought onto the farm.

“So, to achieve this more grass had to be grown and better grass quality was needed.”

To help achieve these aims, the soil fertility on the farm was studied with soil analysis highlighting areas to concentrate on – especially areas which needed lime to correct pH deficiency.

Stephen, generally, follows the zero-grazer with slurry. However, some areas sampled highlighted low phosphate and potash levels. Additional slurry and in some cases a compound fertiliser would be required.

Keown continued: “During 2019, all cows had been housed and milk production throughout the year was based on silage and zero-grazed grass.”

“With the resource of an adequate grazing block around the yard, it was decided to get cows out grazing this year.”

“Cows are selected for grazing on stage of lactation with currently 100 cows grazing and 140 cows housed.”

Pre-grazing targets for the herd are 3000kgDM/ha – for both cows grazing and grass used for zero-grazing with the aim to maximise the energy available in the grass.

“Looking back at last year’s production – the fact that daily milk sold is down two litres per cow would normally cause concern.”

“However, with the lower cost associated with cows grazing, the farm margin has actually increased slightly.

“Currently all cows are averaging 31 litres per day at 3.72% fat and 3.38% protein, the current feed rate is 0.31kg/litre.”
“This time last year the herd yield was 33 litres per day with a purchased feed rate of 0.37kgs/litre.”
“The result is a higher margin with 100 cows out grazing night and day and this is not counting the wear and tear on machinery associated with feeding or spreading slurry if these cows where housed.”

Jackson said: “Feeding cows is the number one cost on this farm, purchased feed has been significantly reduced from last year.”

“Targeting cows in late lactation with grazed grass is working well for us with significantly lower monthly feed bills and labour cost this year.”

Herd fertility is viewed on the farm as the number one performance indicator.

The herd is calving all-year-round with monthly pregnancy rate and rolling twelve-month calving interval key parameters used on the farm.

Genius RMS is used 100% on the farm for all fertility and breeding of cows and heifers allowing farm labour to focus on other tasks while at the same time delivering an improvement in fertility performance.

Sexed semen has been extensively used across both the dairy cows and replacement heifers.

The RMS program has been central to the improvement in the herd genetic profile of the herd. The current calving interval on farm is 372 days with pregnancy rate at 26%.

Sire selection is based on improving each individual cow in the herd.

Jackson added: “The RMS program has been a good venture on this farm, fertility performance has improved, and we can now focus on developing the herd traits we want to build resilience into the business.”

Keown concluded: “All sires used must fall into the sire selection criteria for the herd which is formulated in conjunction with the RMS team.”

“The Jackson farm continues to strive for more grass of high quality, whilst developing and improving herd genetics has become integral to the dairy business. Stephen Jackson has successfully focused on profit margins and not just milk output at any cost.”