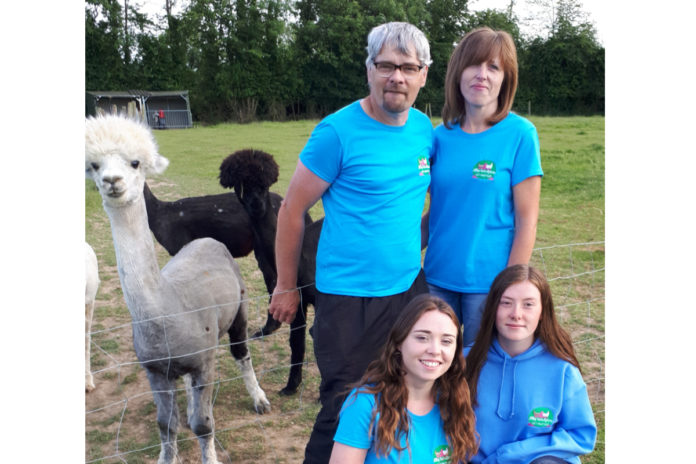 Nestled in north Offaly, just outside the village of Ballinagar, close to Croghan Hill, Ireland’s only dormant volcano, is Hilltop Farm Alpacas.

The 234-metre high hill is clearly visible from the upper parts of the 20-acre enterprise.

This alpaca farm came into being in October 2015 when the owners, Alan, and Catriona McIntyre, purchased two 2-year-old pregnant females.

“We hadn’t set out to be alpaca farmers; we fell into this lifestyle accidentally. It all goes back to the financial downturn that began in 2009,” they explained to Catherina Cunnane, editor of That’s Farming.

Catriona lost her job because of the national downturn and after continuously searching for a position, she eventually located employment locally in Daingean.

She worked there on a contract basis and when her final contract was coming to an end, her boss advised her to try and stay working in her current office under the Rural Social Scheme.

There were a few requirements, however, to be eligible for this scheme – one being having a herd number and actively farming, which meant having animals or a flock.

“I was from a farming background, so I had available land. The problem was what to put on the land.” Catriona explained.

“Alan was from Tullamore town and would not have had any agricultural connection. We looked into what might suit our abilities and somehow, we still don’t know how or why, we decided to try alpacas.”

Within two days of making this decision, they found an alpaca farm within twenty minutes of their house.

A day after finding out about this farm, they called the farmer and visited him. “This was moving so quickly. From not really knowing what an alpaca was to visiting a farm and considering buying a couple of pregnant females.”

Within four months of their first visit, the McIntyres had purchased the animals and were beginning their adventure into farming.

The initial plan was to sell the cria when it was safe to do so. Alas, the plans changed completely once the cria were born.

It was decided they just could not be sold, so now they have 15 alpacas with more on their way this summer.

Hilltop Farm Alpacas is now a thriving business which the couple have built essentially from nothing.

Alpaca tourism is not a term widely used in Ireland, but this farm is leading the way in some regards. Visiting Hilltop Farm Alpacas requires you to book in advance of your visit to see the animals.

“The reason for this is because we, along with our two daughters; Amy and Jenny, who are also heavily involved in running this farm, would like each visiting group to have the alpacas to themselves.”

“Each visit lasts up to two hours and it involves walking among the females and watching them come to you.”

“Alpacas are inquisitive animals and these guys are no different. Some will even try to open your laces.”

“After seeing the girls, you will be brought to the boys. One of these fellows is a show-piece and he knows it.”

He has ‘written’ his own autobiography; Alpaca Autobiography – Bronson of Hilltop Farm Alpacas, which is available on Amazon.co.uk – both as a digital and hard copy.

“He poses for photos and during the dry months he and two of the other boys can be brought for a walk up the hill and you will see all of the views around – Croghan Hill, wind turbines and the Slieve Bloom Mountains.”

“Following this you will then be treated to some complimentary light refreshments,” they added.

But that is not all as Hilltop Farm Alpacas hosts hen and birthday parties and they are also in demand for attendance at wedding ceremonies.

And now, the McIntyres have just added another string to their ever-improving bow.

They have recently completed an extensive social farming course and they are now ready to commence.

Social farming is the practice of offering activity on farms like Hilltop Farm Alpacas as a form of social support service.

In social farming, this alpaca farm remains a working enterprise at its core, but it will be inviting people to participate in the day to day activities of the farm.

“Giving back to the community is something we believe in – especially since we have hosted so many different groups on alpaca visits.” the couple concluded.