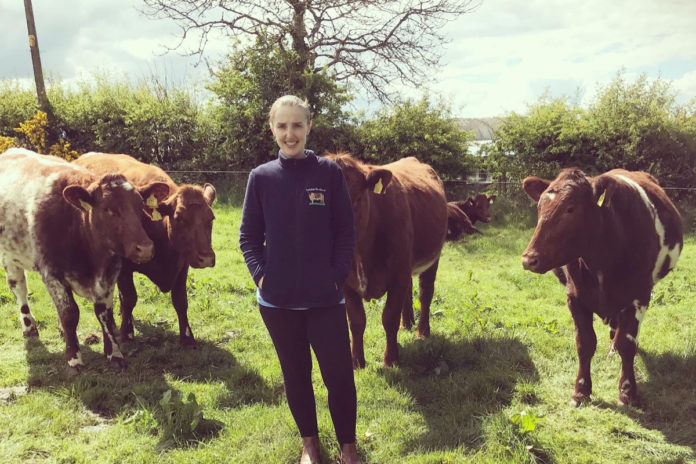 Becoming a pharmacy dispensary assistant provided an ample opportunity for Ruth Parks to return to her first love, farming.

The Drumhillery, Co. Armagh native, who juggles a 9-6 Monday-Friday job with the running of a suckler herd, claims that she was always destined to stay true to her farming roots.

“Growing up on a Limousin beef and dairy farm, as well as keeping Hampshire Downs, jobs from feeding calves and pet lambs to standing in gaps and opening gates needed to be done.” she explained to Catherina Cunnane, editor of That’s Farming.

Her interest in farming continued to blossom into teenage years until she ventured to Queen’s University Belfast to study a modern history degree programme. “Whilst studying, I couldn’t commit the same time to the farm as I previously had and so, in turn, I didn’t have the same interest.”

“I would have helped daddy with the odd jobs when asked to, but I wouldn’t have actively sought jobs out.”

Ruth began working as a pharmacy dispensary assistant after she graduated from university. “Having evenings and weekends free, I began to resume my former role on-farm, and I fell in love with farming all over again.”

“At the time I had a pet Limousin bull named Harry, who probably is to thank for all this. The more I became involved on-farm, the more I wanted my own herd of cattle.”

“After walking through the herd, I knew this was the breed for me and I ended up buying eight pedigree Shorthorn heifers back in August 2019.”

She had planned to make her debut on the show circuit in 2020; however, the Covid-19 pandemic has put this plan aside for now. “There is always next year though. Farmers will definitely miss their annual days out at shows this year and I know I will.”

“As a child, ag shows were regarded as our family day out. We never went on holidays, farming came first.”

Ruth believes that women are coming to the forefront of agriculture, through the power of social media.

The Armagh farmer is passionate about connecting with fellow women in agriculture, a desire which inspired her to join Instagram under the Ruth’s Farming Life handle. “It’s been inspiring to see so many women across the world farming cattle, sheep and arable crops.”

“I want to be amongst these other women, raising the profile of women in agriculture.”

“Growing up with no brothers, there was no comparison between a male and female. I was seen as a person who could fulfil the roles on the farm, despite what my gender may be.”

“I was lucky that way. I was always encouraged to take on roles on the farm and to this day, I’m still being encouraged by both parents.”

“Don’t get me wrong, there is still some stigmatism that women can’t do what men can nor or they physically as strong,” she admitted.

Looking ahead, Ruth, will maintain her off-farm role and has plans in the pipeline to help her recently established herd to reach new heights, but was keen to stress that “one never knows what the next couple of years may bring”.

“At the minute, the two jobs work well together, being a frontline worker during Covid-19 and being able to come and farm, provides me with some normality and allows me to shut off from my job.”

“I know I want to one day take over the family farm, when the time comes and continue as a fifth-generation farmer with my Shorthorn cattle in tow.”

“If farming became more profitable, I would love to be a full-time farmer! Nothing beats being out with the cows and in nature, enjoying what you do.”

“Yes, the hours would be longer than my normal 9-6 job, but if you get to call your passion your job – what more could you want?” Ruth concluded.