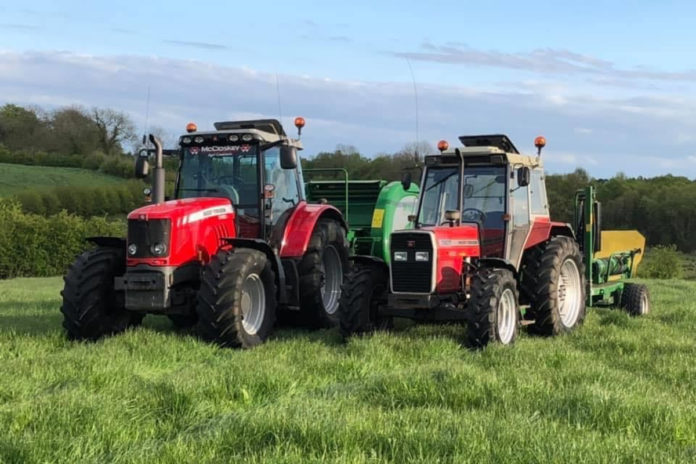 How starting an ag contracting firm ‘happened by accident’

Starting a contracting business “happened by accident”, according to Christopher McCloskey.

After starting out with just a wrapper and a sprayer, the “phone never stopped ringing and the work never stopped”, which led to a part-time job becoming a full-time one.

Now trading under McCloskey Agri Contracts, the Kilrea, Co. Derry-based contractor is trying to forge ahead and expand the business even further.

Explaining how it all began, Christopher said: “My uncle farms too and back in 2010, he bought the baler, I bought the wrapper and we made our own silage together.”

“I started to get a lot of work from lads with wrappers breaking down and it turned out I was flat out with the wrapper. I was surprised by how much work I got just for the wrapper on its own.”

Since then, the young Derry man has expanded to offer mowing, baling, wrapping, slurry and dung spreading and dump trailer services.

The mower is a relatively new addition to the fleet. McCloskey explained that when he purchased this implement, he did not even have any work for it other than the silage on their home farm. It transpired that he was once again in demand and mowed well over 1,000-acres last summer.

The fleet of tractors has also seen a major upgrade. McCloskey started out with a Case 885, which he was gifted by his grandfather. He now has a Massey Ferguson 6480 with a McHale baler, a 390T and McHale wrapper, a John Deere mower and a 16-tonne Kane dump trailer.

“I’ve been just trying to build it up while keeping the debt as low as I can,” he explained.

The 6480 Massey Ferguson is the powerhouse of the fleet and one that Christopher was well accustomed to before purchasing back in 2017, which added a sense of security to the investment.

He revealed: “I bought the 6480 from a neighbour that I used to do some work for, so I knew that tractor from brand new. I always liked her and then I got the chance of buying it.”

The dump trailer is an underrated tool in the arsenal of a contractor, according to McCloskey. Many of his friends are in the construction industry and coupled with farm work, this contractor said: “The trailer work is probably the busiest part of the business.”

As he already had the mower and the wrapper, he decided to “bite the bullet” and make the next and most recent investment in a McHale baler. He hopes that being able to offer silage services from start to finish will further expand the business and client base.

Despite the considerable growth the firm has experienced over the last decade, the young farmer told That’s Farming that it doesn’t look like slowing down any time soon.

“It’s still growing. Some local farmers will do everything to give you a chance, they would nearly cut a field of silage just to give you a turn.”

“It’s funny because people will either help you along or try pull you down, but I’ve definitely been lucky in that way.”

However, McCloskey never lets the workload get too much as he prefers to keep it to a one-man system.

“I have plenty of friends around so there’s always someone to help, but I try not to employ anyone because it’s hard enough to get money out of it yourself,” he said.

He told That’s Farming that competition for work is rife in his area, as there is an abundance of contracting firms available to work at any given time. Keeping it to a one-man system as well as the quality of work, are the key aspects that he has in his favour.

“I would be very fussy, even before I started contracting I was like that. My grandfather and my dad would be that way too. If you leave it the way you want it left yourself then people will get you the next time.”

“I take my time too. I wouldn’t ever be in a rush because I only take on what I’m able to. You’re only as good as your last job,” he said.

As eluded to previously, Christopher never intended on becoming a full-time contractor. Now that time has moved on and he is where he is today, he said he would not dream of a career move.