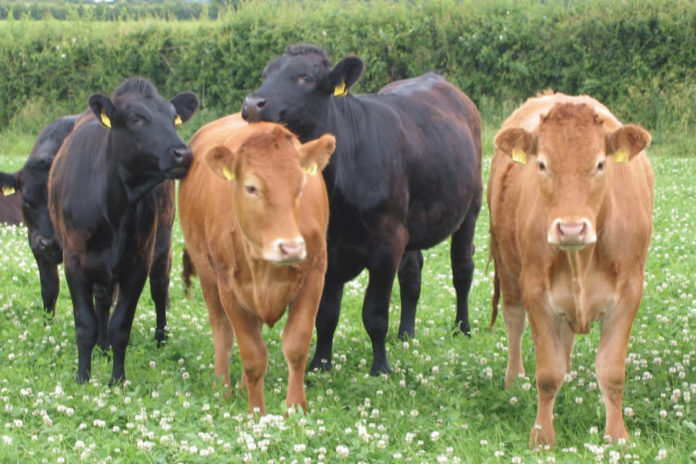 How clover can improve profitability during COVID-19

The current Covid-19 pandemic means profitable and cost-effective systems are more important than ever to help farm businesses continue to meet the needs of the supply chain.

The utilisation of clover swards can save money, help the environment and improve animal performance.

Ruth Ruddell from the Sustainable Land Management branch at the College of Agriculture, Food and Rural Enterprise (CAFRE) said: “Nitrogen in the atmosphere is not in a form that is available to plants, it needs to be converted to an available form such as Nitrate (NO3) or Ammonium (NH4).

“This can be converted naturally by leguminous plants – for example, clover, beans or peas. Legumes have root nodules which contain rhizobia bacteria which are very beneficial as they can convert nitrogen gas from the atmosphere to a plant available form of nitrogen during the process of ‘fixation’.”

Combining efficient use of slurry and manures with nitrogen fixation by a clover sward can improve production efficiency and reduce the use of purchased artificial fertiliser thus improving farm profitability.

This also has the environmental benefit of cutting greenhouse gas emissions from the production and use of artificial fertiliser.

CAFRE expert Ruth Ruddell added: “Research by Agri-Food and Biosciences Institute (AFBI) has shown that a perennial ryegrass/white clover sward can be as productive as grass-only swards receiving medium to high fertiliser nitrogen as it can fix approximately 150 kgN/ha per year.”

“In a study carried out at AFBI Hillsborough a grass-clover sward which received no nitrogen fertiliser had the same stock carrying capacity as a grass-only sward fertilised with 170 Kg N/ha. Other AFBI studies have found that with low levels of slurry nitrogen applied a perennial ryegrass/white clover mixture out-performed a ryegrass only sward.”

“White clover varieties are particularly suited to livestock farms in Northern Ireland providing an extended grazing season at the backend of the year.”

“However, red clover is best for cropping-silage systems. All swards benefit from having soil pH, P and K status at optimum levels but legumes are particularly sensitive to lower levels. Aim for a pH of 6.3 or higher as this is very important for the maintenance of legumes.”

“As much of Northern Ireland is upland and often has quite acidic soil, not all types of clover are suitable so be sure to check the recommended varieties on the BGS grass and clover list. Clover can remain productive and persistent in swards for four to five years depending on management.”

“For grass/white clover swards the optimum clover content of the sward over the season is 30 per cent in the dry matter.  However, this figure will vary throughout the season from 20 per cent in spring to 60 per cent in late summer. Growth in spring will be later than for ryegrass swards.”

Swards with a high clover content can improve animal health and performance. Worm burden is reduced especially when mixed grazing, and trace element availability is increased from the clovers’ deep roots.

“Bloat is not generally a problem on clover swards in Northern Ireland. However, reduce risk by moving stock onto dry grass and avoid letting animals gorge by feeding roughage like hay or straw before moving into a clover sward.”

“Grazing sheep before cattle also reduces the risk for cattle. If an animal becomes severely bloated then seek veterinary advice and remove from the clover sward.”

“Flock keepers also should be careful not to graze ewes on red clover swards for a period of four weeks before and after tupping due to its phyto-oestrogen content, which can cause poor reproductive performance. However white clover has no issues with phyto-oestrogens.”

- Advertisement -
Previous articleFancy a career with the Department of Agriculture?
Next articleHow much are contractors in the UK charging?