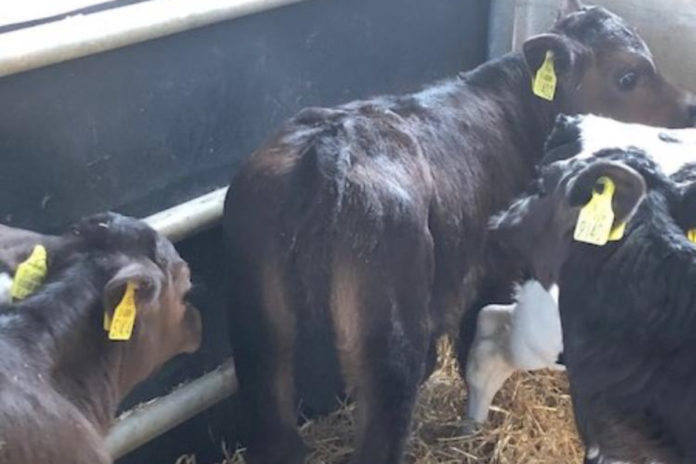 How Aubracs are ticking all the boxes for this dairy farmer

Shaun Maguire was immediately impressed with Aubrac cattle when he first set his sights on the breed at the National Ploughing Championships.

A selection of pedigree and dairy-crosses on display at the Irish Aubrac Cattle Society’s exhibition stand, prompted the dairy farmer to introduce the breed to his dairy herd in Ballyconnell, Co. Cavan.

Currently in the middle of the breeding season, Maguire, who milks 110 high-EBI cows, aims to produce high-EBI Holstein/British Friesian-cross cows for his herd. His breeding strategy involves six weeks of AI followed by beef-bred stock bulls for the remainder of the season.

Having previously used solely Hereford bulls, the Cavan man purchased an Aubrac bull from his cousin, who is a pedigree breeder in the midlands.

Since then, he has not looked back and has been thoroughly impressed by the performance of the breed. This year brought the second crop of calves from his stockbull and Maguire continues to reap the rewards.

“Most of the Friesian cows calve unassisted on their expected calving date or very close to their due dates, as Aubracs have a shorter gestation period than most breeds.”

“They are easy calving but turn out to become great calves. The calf comes out small, but after two or three days, they fill out and get very square.”

This is the first year he has sold his Aubrac progeny, with the first crop being offered for sale as yearlings and this year’s crop as calves.

“I sold all of last year’s calves about a month ago as yearlings. I sold them privately at €2/kg so they went for around €650-€700 and I was happy with that.”

“This is the first year I was selling calves of that age. I had Herefords advertised and every man that came for Herefords, went home with Aubracs, that’s what I like about them. I got €200-€250 for the Aubrac-cross bull calves and €180-200 for heifers.”

The Cavan-based farmer explained that many suckler farmers are keen to buy his heifer calves as replacements.

“The heifer calves I sold had a replacement index of approximately €190. Some of them have bright red colouration and suckler farmers were mad for them.”

He has been so impressed with the breed that he has even successfully convinced a neighbouring farmer to introduce Aubrac genetics to his herd.

“He’s milking 250 cows at the minute. He bought an Aubrac bull last year when he saw my calves and is extremely happy with them too. He put 20 Aubrac calves on Donedeal.ie and had them sold in 2 hours.”

Shaun firmly believes that Aubrac is superior to other breeds within a beef production system. He explained that they are hardy, easy-fed and have a better feed conversion rate than any animal he has worked with before.

Looking towards the future, Maguire can envisage increasing his involvement with the breed by purchasing another Aubrac bull.

The trade that he has experienced for his calves has been positive and he is confident that this will continue long into the future.