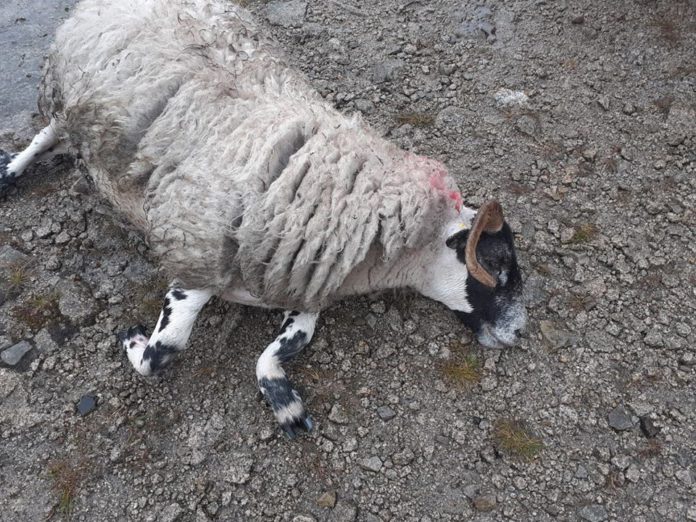 Another livestock worrying attack has occurred in County Down leaving a farming family to deal with what the Ulster Farmers’ Union has described as a “horrific aftermath”.

UFU deputy president ,Victor Chestnutt, says it is wrong that farmers continue to pay for people’s lack of respect for livestock that are grazing in the countryside and have to witness the disturbing impact of the attacks on their animals.

This most recent attack, he said, reinforces the need for all dog owners to ensure that their pets are not permitted to roam freely in the countryside.

Mr Chestnutt said, “It is a harrowing sight to see poor defenceless animals such as sheep fall victim to dog(s).”
“There is a consensus amongst dog owners that their pet dog would not engage in such attacks, however, I would urge dog owners to remember that the desire to hunt and chase is part of any dog’s natural instinct.”

“The safest and most appropriate thing for all dog walkers to do is to always keep their dog(s) on a lead when out and about, and I cannot emphasis this enough.”

“Whether walking along rural roads, through the countryside next to fields and farms, dogs must be kept under control as there is the potential for livestock worrying.”

“If a dog were to engage in a chase this could result in injury or death of those sheep who fall foul to the actions of irresponsible dog owners.”

He said that sheep that have been chased by dogs in the past and have survived, never fully recover from the attack.

“This can result in serious financial loss and stress for the farmer, not forgetting the long-term effects of increased levels of depression and disorientation amongst the flock.”

Under the Access to the Countryside (Northern Ireland) Order 1983, members of the public are not allowed onto open country (mountains, moors, heathland, hills, woodland, cliffs, foreshore, marsh, bog or waterway) with a dog that is not under proper control.

If a dog worries, attacks or kills sheep the person in charge of that dog is guilty of an offence. The penalty for this offence is a fine of up to £1,000.

Livestock worrying is preventable; by abiding to the law and being mindful of the welfare of livestock and the livelihood of local farmers, dog owners can enjoy the countryside, keep their pet safe from the consequence of a dog worrying incident and avoid a substantial fine.

“I again appeal to all dog owners, dog wardens and local authorities to step up to the mark and prevent incidences of livestock worrying occurring in Northern Ireland’s countryside.”

“UFU members will not tolerate attacks on their livestock which can also be defined as a direct attack on the farmer and his/her family.”

“I would ask all farmers to ensure that all incidences of livestock worrying are reported to your local dog warden for investigation,” the UFU deputy president concluded.