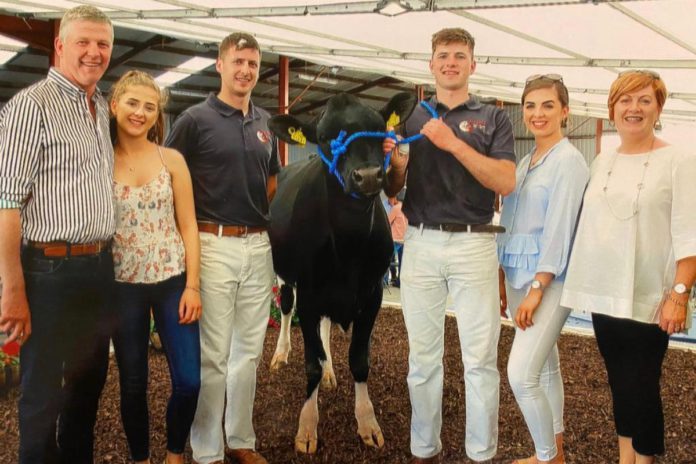 In this week’s dairy segment, That’s Farming, speaks to Henry O’Keefe from the Radney Holstein Friesian herd who farms with his son, Liam. He discusses Brucellosis, using sexed-semen, calving heifers at 22-24 months, receiving €1,140 for cull cows and his thoughts on the future of dairy farming.

Henry O’Keefe established his Holstein Friesian Radney herd 37 years ago after acquiring them from the Ardrahan herd. These cow families included Gerard, Deborah, Ostrich, and Odetta.

The Freemount, Co Cork, native left school after his Junior Certificate and took the family farm’s reins. Seven years later, he faced a Brucellosis outbreak in his 60-cow herd.

When culled by the notifiable disease, the farm transitioned to a Holstein Friesian pedigree herd, which today comprises 110-cows on 150-acres owned and 60-acres leased land.

His son, Liam, went into partnership with him three years ago, after a level 7 qualification in agriculture in CIT and Clonakilty Agricultural College.

“We have a great love for farming and animals. GAA is our hobby, farming is our passion, and we like to have quality time with our family,” Henry O’Keefe told That’s Farming.

“In the 1950s, my father’s father bought the farm. His brother continued farming down the road, and my father and I started farming where we are farming now.”

“My father, Mossie, played a very important role in the farm up until ten years ago.”

“A lot of the cow families I have are a pleasure to work with. We have 33-34 excellent cows and 45 VG cows, which will last in the herd a long time.”

“There are many Holstein Friesian cows out there, and they have very good milk solids behind them. However, we have only two cows in the herd under 3.50% protein, so we are fairly strict on protein.”

The herd expanded from 90 cows three years ago to its current size. Henry secured an extra 50-acres of land and now, partnered with his son, influenced this gradual move.

“I would not like cow numbers to get too big because of our land base. We have a zero-grazer. We zero-graze both ends of the year and draw from an outside block of land.”

“In my view, I would rather have 110 cows good and look after them probably rather than having 120-150 females that might not be as good.”

They outlined one-and-a-half tonnes of concentrates, and some sugar beet achieves these figures. 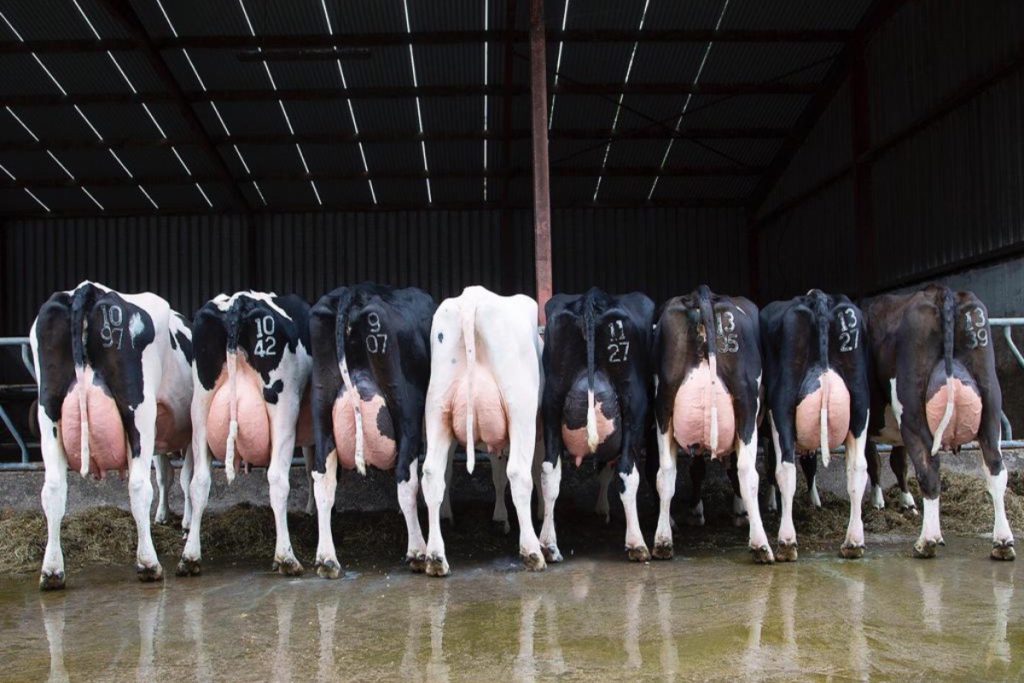 The farm uses 90% sexed semen on all its yearling heifer and it is carried out by the local AI technician.

“We find sex-semen good on heifers, and we get a good conception rate when we AI them inside.”

They use 90% AI on his cows, completed by Henry’s son, Liam, who completed an AI course.

They use AI sires including Albert, Munta Mystic, Mystic, Sebastian, Sport, and PH-FRAZER.

The programme consists of eight-ten weeks of AI.

The County Cork natives use their own Holstein Friesian stock bull to mop-up cows and heifers.

They have five bulls standing in AI stations in Ireland.

They calve most of their cows in January/February with a selection in March/April under 10 cows in October. 76% of their cows calve in 6 weeks.

The father and son team finds a spread out calving period works efficiently for them while milking all-year-round.

A 50-day dry period works for them “because cows calve down fitter, and there is less trouble with milk fever”.

“If a cow did not go in-calf, we were flushing when they calve again, or for any other reason, do not go overweight, they milk on, get fit, and are back into the system.”

“There are a lot of very good cows are lost around the country because of compact calving, so, any day a cow calves is a good day.”

They calve their heifers down at 22-24 months old.

“Many of them are 23 months, with some 22-24 months, and then, once it comes to calving after Christmas, we AI everything.”

“They are big enough to calve at that age. It works in the system we have, and the cows do well.”

“We feed them well all the time so they reach their target weights and will be able to deliver when they calve down.”

The family feed their calves on an Urban calf feeder for 70 days and wean them gradually.

They also attend the IHFA sale in Nenagh and Cork Holstein Club’s sale in Bandon and Breeders’ Club sale in Kilmallock Mart for bulls.

“We received numerous good prizes in Nenagh, Kilmallock and Bandon.”

“We sell about 25 bulls at home, so there would be farmers coming back again, and we appreciate it.”

“It is great to see them coming back. They are happy with what they get and how the stock is doing.”

The father and son team sell the remainder of males “from lesser-quality cows” at three weeks to an exporter.

They sell 20 in-calf heifers at the Proven Protein Sale in Kanturk Mart, in conjunction with Denis Barrett Auctioneers or on-farm.

“We hope to have another twenty heifers to sell in the springtime.”

“The open day was a great advertisement for our stock, and it showed off the kind of stock we had on June 27th, 2019.”

“We have had more heifers to sell in recent years with sexed-semen, and since cow numbers increased, we have more bulls.”

The father and son operation bring cull cows through to slaughter or sell them at Kanturk Mart.

He culls cows if they do not go-in-calf or develops different issues.

The father and son duo believe grassland management is “king” and reseed, top, and fertilise their land as required.

They manage their paddocks by measuring them with their eye, allocating three twelve-hour grazing’s per field (36-hour-grazings) and not using strip wires when enough grass is available.

“It is an easier system to operate. You were spending too much time in the parlour. It was old, and it needed upgrading.”

Other infrastructure includes a 114-cow cubicle shed, a 45-cow cubicle shed for yearling heifers, a selection of sheds for bulls, calving, plus a new calf shed built in 2018.

The IHFA and Cork Holstein Friesian Club members implement technology on the farm with a calving camera, a Dairymaster Moo monitor+ system and an Urban calf feeder.

Henry outlined why they are passionate about farming and the challenges they face in the field.

“It is a great way of life. My passion would be for breeding good cows and watching them develop. However, we are passionate about all aspects of the farm, really.”

“I find it challenging with a lot of new rules and people talking down farming for carbon emissions and that. I do not think we are doing a bad job with the land, really.”

“The challenges for me are always to breed a better cow and to keep improving all the time.”

“I would say we are manageable at this stage. We like to do what we have right than to go too big. There are always ups and downs with milk prices being volatile and input costs for farming.”

“There are more ups than downs which is the main thing.”

“My wife, Marie, is teaching. We have a son, Alan, and a daughter Niamh, who have followed in her footsteps. Liam is at home farming, and Julie, the youngest is studying in UCC.”

“It is great to see Liam coming on and being so enthusiastic about continuing on the work we have put into the farm.”

“They are all a good help when they are around, and it is a fantastic environment to rear a family.”

“People will always want food, and that is the main thing. The food we produce in Ireland has a lot of advantages over other parts of the world.”

“I would not be a fan of cutting the national herd. We all have to embrace technology, but I do not think there is a point in cutting the herd here and importing dairy or beef products from different parts of the world; it does not add up,” the dairy farmer concluded.