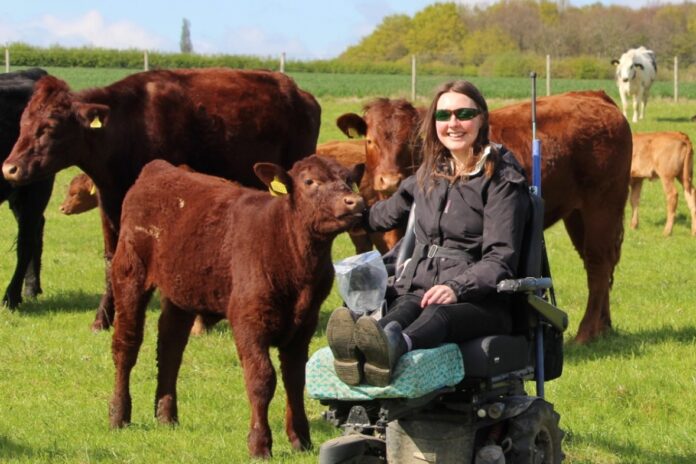 ‘My wheelchair can practically take me anywhere on the farm’

In this week’s Women in Ag, That’s Farming, talks to Holly Moscrop, best known to readers as One Girl and Her Cows on social media. She tells us how a chronic illness has not deterred her from fulfilling her life-long goal of becoming involved in the agricultural industry.

Holly Moscrop describes herself as a “backseat farmer, a blog writer and farm dictionary creator living with a chronic illness”.

The family-run enterprise is operated by her father, Roger, and uncle, Chris, with cousins occasionally working here, too.

“My grandmother grew up on a farm rented by her parents. They moved out of the farm when she was a teenager due to her father’s ill health. She remained interested in farming and went to agricultural college,” she tells That’s Farming.

“My grandparents went on to rent a farm in the 1960s, which is where we farm now.”

“Before I became ill, I have always planned on becoming a farmer and working alongside my dad. After developing M.E., I have had to accept that I will not be able to be involved in the industry the way I once planned.”

“There has been a lot of adapting and thinking outside the box over the years, especially during the years where I could not leave my bedroom at all.”

“We basically had to bring the farm to me and find a different way to keep me connected to it. My dad set up cameras in the yard, and the cow shed so I could always see what was going on.” 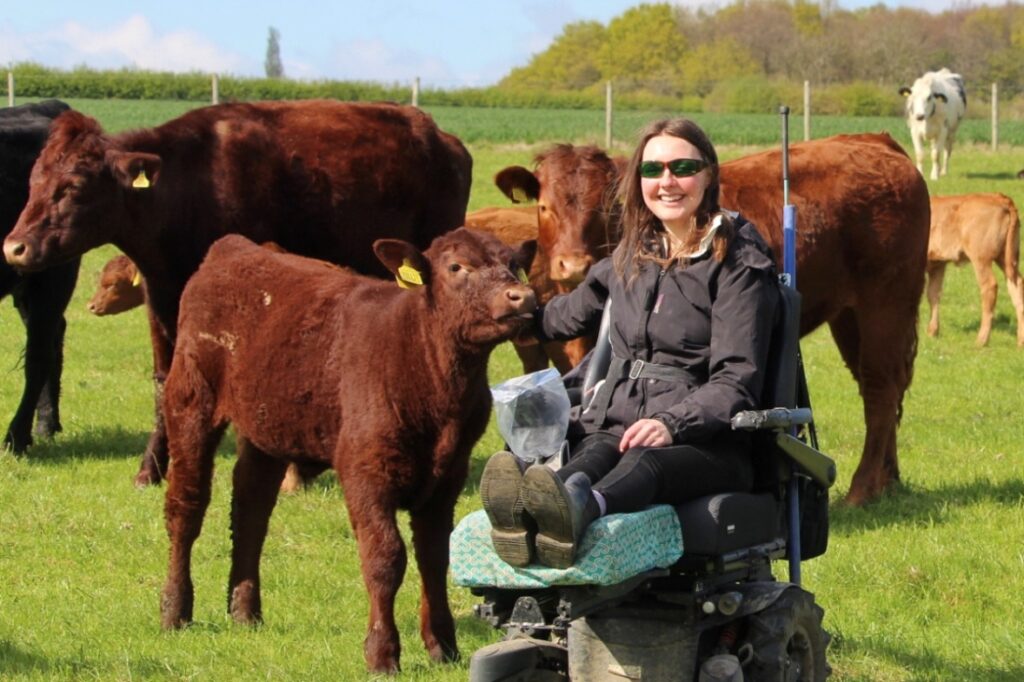 The farm was initially just arable land, but when her grandmother moved in, she added livestock to look after while Molly’s grandfather was away working.

The pair began the suckler herd by buying cull dairy cows, and dairy crosses, and multi-suckling calves from the neighbouring dairy farms.

At this stage, the farm also comprised a flock, as well as a pig unit, but currently, it is home to a suckler herd only.

“My father and uncle are both farmers and agricultural contractors,” she adds.

“Contracting for other farms takes up most of their time, and I do the paperwork for both sides of the business.”

Holly believes that her main barrier has been the illness itself, and ultimately having to accept that it has the deciding vote on what she can and cannot do on any given day.

“I have made a role within its limits, which is why I began taking over the admin side of the business. I do all the paperwork relating to the farm and contracting business from my bedroom.”

“Once I became able to begin going outside again, I was really lucky to be able to get my powered wheelchair, thanks to my parents.”

“My wheelchair can practically take me anywhere on the farm and has given me so much freedom during the times I can go out.” 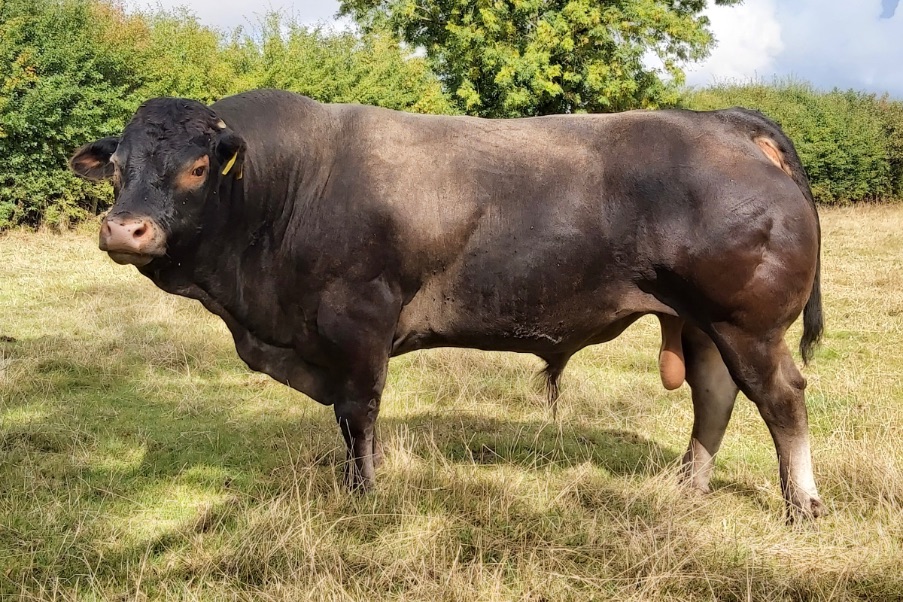 In total, the farm comprises 33 cows, which are all commercials with the exception of 15 pedigree Lincoln Reds.

“We have increased cow numbers and are still gradually building them to aim for a herd of 40 cows.”

“We realised we had enough grazing land for more cows if we used the grass for silage, instead of selling the surplus as silage and haylage.”

The farm is home to a mixture of breeds, which are primarily Lincoln Reds and their Limousin-cross daughters, in addition to some dairy-cross females.

“We used to buy in dairy-crosses from a local dairy farm and kept some of their Limousin-cross daughters. In 2015, we began changing to Lincoln Red cows.”

“I have narrowed it down to a few breeds but found somewhere to buy some Lincoln Red heifers from, so I tried them out and never looked back.”

The cows run with a Bazadaise bull, which the farm introduced as a replacement for its Limousin sire to “retain easy calving traits whilst adding more shape”.

“We are beginning to use one round of AI with certain cows at the beginning of the breeding season to breed our own Lincoln Red replacements.” 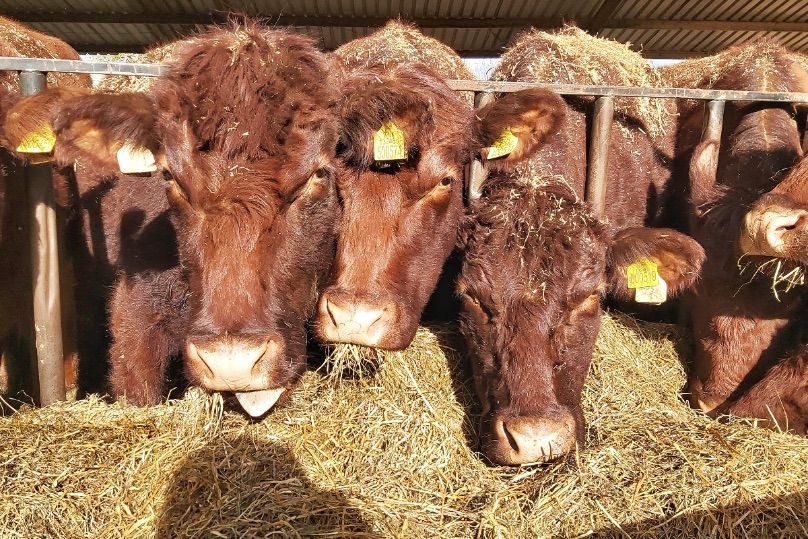 Calving season commences on February 1st until May. Holly made the decision to start moving the start of calving back seven weeks over the last several years to correspond with contracting work.

“This means we have more time to focus on cows at calving time, especially since we are trying to build numbers up.”

“We try to have calving completed and all stock turned out to grass before silage and haymaking begin in May. In addition, we wanted to make the most of the spring grass.”

“My ideal cow is easy calving and a good mother, so we can be as hands-off as possible at calving time to leave them to do their job.”

Her favoured cow type is circa 650kgs to suit the land’s heavy and wet nature, which she says poses challenges.

She explains further: “It would not hold them for as long, hardy and easy to keep weight on so they can spend their dry period just eating hay.”

They sell all progeny are sold as stores at around 10 to 12-months-old, straight from the farm gate to other local farms.

They aim to average around 350kg-450kg and use current market prices to set their target price per kg.

She reflects on her journey: “I am so proud of where we have taken the herd, so farm and I am excited for the future of it.”

“I think that selling our own beef would be an accessible way for me to help add more value to what we produce, and I really hope we can make that a reality at some point.”

She admits: “I have felt that it is difficult to find my place in the farming industry.”

“If you cannot do what you want to do or be involved in farming the way others can, then it is easy to feel like there is not a place for you.”

“I learned that even if the most involved you can be is just through a screen or by watching them from a distance and supporting others, then that is enough; you are still a part of the industry.”

“Being a farm secretary was never my end goal, but I am really grateful to be able to do this and get to be involved in what I love while also getting to a part of the decision-making and management of our cattle,” she concludes.