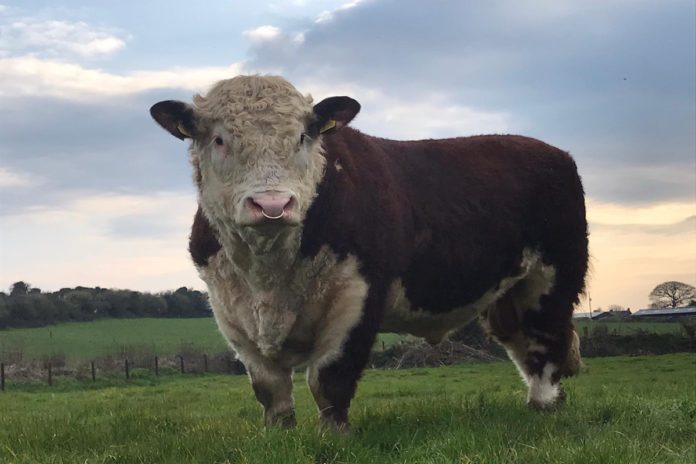 A spokesperson from the society said the sale was very different to a conventional sale with there being no show, bulls having to be delivered at designated intervals and buyers having to make appointments to view unmanned stock.

24 bulls were presented for auction from across the country and each bull was pre-recorded walking around the show ring on arrival to the mart. The video was played back later at the time of the live auction for bidders to view.

The sale achieved an overall clearance of 30% with a top price going for ‘Ardmulchan Omagh’. The bull was bred by long-time breeders Phil and Catherine Smyth of Ardmulchan Herefords, Co. Meath.

He was sired by Church Preen Galileo and has a quality bloodline, according to the spokesperson. He was fertility tested and has a 5-star rating for docility and daughter calving interval across all breeds.

Ardmulchan Omagh was sold to a breeding herd in Kerry for a top price of €2,400, which is much lower than his value and the desired top sale price and, according to the society spokesperson, this price is indicative of the hard times that breeders are facing across the country.

The next highest price for a bull was ‘Ryemountpoll 1 Knight’, who was bred by Dermot Kelly from the Ryemount Hereford herd in Co. Kerry.

The bull was sired by Solpoll 1 Handsome son and has “stars to burn” with 5-star ratings for replacements and terminal index whilst being easy calving. He has moved to new pasture to a breeding herd in the South.

- Advertisement -
Previous article
QUIZ: Are you an agricultural contractor?
Next article
Looking for love after lockdown?