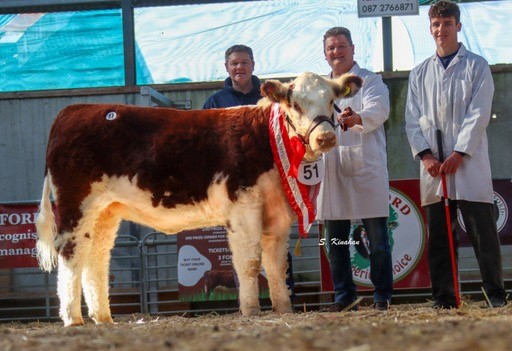 Leading the charge at €4,900 in the female ring at the Irish Hereford Breed Society’s premier show and sale at Tullamore Mart on October 15th, 2022, was Lios Breacpoll 1 Patricia.

The second heifer class of the day saw Lios Breacpoll 1 Patricia place first in her class before she was tapped out as the female champion on the day.

This heifer was bred by John, and Enda Flynn from Newtonforbes, Co.Longford and is a July-2021-born heifer, by Fabb 1 Northern star going back to a Grianan Orange T868 cow.

Class one in the female section went to Loughglas 1 Wanda for Nigel Heatrick Co. Monaghan. This November-2020-born heifer was sired by Clooncullane Major 343 and went on to sell for €2,800.

Second in the class went to Kye Rosie 933, a Pullham Ranger daughter for Padraig McGrath, and she later found a new owner at €2,650.

The third in the class went to Nigel Heatrick with Glasslough Wendy, a July-2020-born heifer, who also went under the hammer at €2,400.

Second place and reserve champion went to Kye Ger 965 from Padraig Mc Grath, Elphin Co Roscommon. The September-2021 heifer is by Pulham Ranger and out of a Kye Ger 749 dam and came down at €2,700,

Third in the class went to Aughakil 1 Pumpkin from Kenton Crowe Co. Leitrim, who later went on to sell for €2,450.

Crowenstown Prettymaid 3 was also a top attraction as she sold for the second highest price of the day at €3,300 to a Cork herd.

Bred by the Drumm family of Delvin Co. Westmeath, the February-2021 heifer was by Mawarra Sentimental ET1 HYF and bred from an Allowdale Prettymaid 557 daughter.

- Advertisement -
Previous article
€5,500 Coralstown Hurricane leads Tullamore premier sale
Next article
‘Under 13s should not operate or ride on ag machinery – it is illegal’