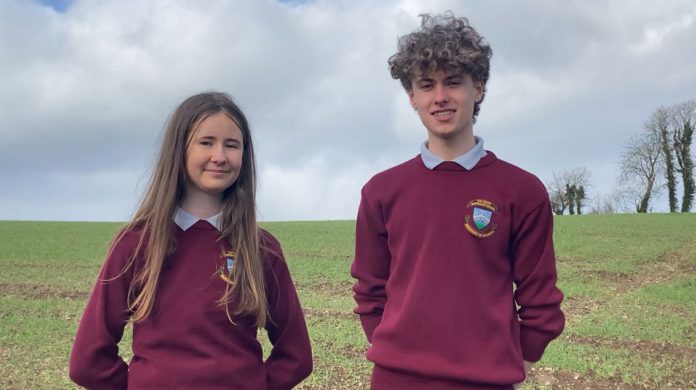 Their project aims to promote the social, economic and environmental benefits of growing hemp and how the crop can promote sustainable farming in Ireland.

It is an extremely versatile crop with over 50,000 different potential product applications.

Cian says: “100% of the hemp crop can be processed into many different eco-friendly products; some examples include hemp insulation, hempcrete (an eco-friendly alternative to concrete), textiles and hemp bioplastic.”

They are advocating for the development of industrial hemp processing facilities, to give a sustainable alternative land use to farmers, while also providing much-needed employment in rural Ireland.

Since their project began in 2019, they have taken action through conducting research, hosting hemp information meetings, social media engagement, creating a website and engaging with public representatives.

They are continuing to take action, through growing their own crop and conducting further research surrounding.

Caoimhe says: “We believe that farmers are being put under ever-increasing pressure to deliver climate action without being given any viable alternatives to their current farming methods.”

“We are passionate about the environment, so we have always been interested in investigating ways that we can mitigate climate change, whilst supporting our economy and local jobs.”

Cian says: “It is vital to ensure that when we are looking for alternative farming methods that we consider the impact, positive or negative, any climate action proposals could have on the rural economy. Ensuring the protection of the jobs of Irish farmers should be a top priority of our public representatives when considering such proposals.”

“From an economic perspective, data shows that through government investment in the hemp industry, hemp has the potential to create 82,000 jobs over 8 years.”

Their project began in 2019 when Cian took part in the RTÉ Youth Assembly on Climate and received the opportunity to present in Dáil Éireann on his proposal surrounding the development of industrial hemp processing facilities in Ireland.

Since then, the students have conducted greater research while also promoting their project by conducting surveys, hosting hemp information meetings and engaging with public representatives.

In the 2020 Programme for Government, the government committed to exploring the potential for growing fibre crops such as hemp.

With the cellulose content of hemp fibre reaching 70%, it can also be used to make paper, furniture and pellets substituting wood, meaning that preservation of forests and their habitats can be accelerated by cutting less woodland. This would lend itself to the establishment of permanent native forests.

In a 2018 report, the Intergovernmental Panel on Climate Change (IPCC) warned that climate change could become irreversible by 2030.

Caoimhe explains: “With hemp’s ability to capture, on average, 8.9 tonnes of CO2 per acre hemp is more efficient at carbon sequestration than trees.”

The crop is unmatched as a means of sequestering carbon dioxide and binding it permanently in the materials it is manufactured into.”

Cian concludes: “We hope that Ireland will be able to satisfy its Climate Action and Rural Development plans through the creation of Ireland’s ‘hempire’.”

- Advertisement -
Previous article
Up to €2,010 for forward cull cows at Castlerea
Next article
‘We started with 250 birds on 3-acres and now have 4,050 organic birds on 8-acres’