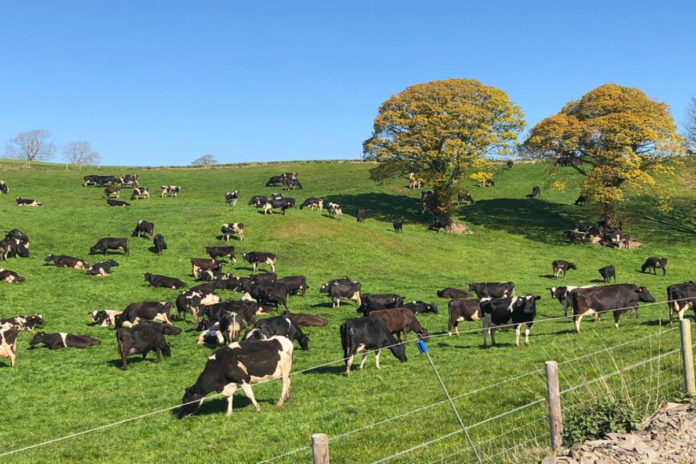 Grass supply falls on dairy farm due to moisture deficit

Grazing management has been vitally important this spring as farmers take advantage of the dry weather to maximise grass production and produce the cheapest feed available.

However, a variation across the country has been seen in both the production and quality of grass.

“Those who got cows out early and have now established a wedge of grass on their grazing blocks are in a good position in terms of grazing and grass management.”

“While on other farms where turnout was delayed and pre-grazing covers were in excess of 3500kgDM/ha resulting in poor utilisation, there was a drop off in milk quality and lower production from grazed grass.”

This dry weather has caused problems further north, however, with some counties experiencing moisture deficits.

Keown added, “Dr Kathryn Huson manages the GrassCheck project and has commented that current on-farm readings for soil moisture range from three centibars on one farm in Tyrone and up to 200 centibars on a County Down farm with shallow, free-draining soils.”

“The majority of farms in Antrim, Armagh and Down are showing higher readings, meaning grass growth rates are likely to be restricted by the soil moisture deficit. The higher the reading, the more likely that grass growth will be significantly reduced in the current conditions, impacting on yield potential.”

When the rain comes, grazed grass will once again play a pivotal role in controlling feed costs on farms across Northern Ireland over the next three to four months.

“After all it is the competitive advantage for milk producers in Northern Ireland.  While purchased feed is an important requirement on all dairy farms, the majority of milk is produced from grazed grass or conserved forage.”

“It is vital therefore that we get the management of grass and grazing correct in order to maximise its potential. So, the question is, have you got the skills set to capitalise on this and what can be done immediately on your farm to improve grass growth and utilisation?”

CAFRE said that the key to constant supply of high-quality, leafy grass is maintenance.

The main task they recommend that farmers carry out is walking the grazing block on a weekly basis and measure grass. They say this will take the guesswork out of grassland management and the list of benefits are extensive.

In a group discussion by the Ardglass Business Development Group, grassland management was a key topic discussed.

Dairy Advisor Keown said: “The focus was very much on grass and the grazing conditions each of the members were experiencing.

Even within the group, the variation in grass performance was remarkable, proving the point that no two farms are the same and require different degrees of management.

Peter and Niall Conway are dairy farmers in Co. Down. The grass production and utilization on their farm formed part of the group discussion also.

“The Conway’s manage 380 spring calving cows on the farm. Calving started on February 1, with cows progressing to grass as they calved from February 6. Fifty per cent of the herd calved in the first eleven days,” Keown explained.

Niall Conway discussed how they feel they have been progressing. “Grass regrowth has been on target so far with cows currently going into pre-grazing covers of 3100kgDM/ha.  Early nitrogen application has helped us get to this stage on the farm, however, I do see growth rates slowing down in recent days.”

The first application of 29kg/Ha urea was carried out on February 3rd, with a second application of 58Kg/Ha on March 1st, when moisture was not an issue.

Combined with the third application of 29Kg/Ha on March 20th, along with slurry application in mid-February, this takes the nitrogen total to 125 Kg/Ha across the Conway’s grazing block.

“The grass demand on the farm is currently at peak and breeding will start this week, we have started measuring grass twice per week in an attempt to manage the drop off in grass supply.”

“Normally grass supply would be ahead of demand on the farm with surplus made into silage. Instead this year we may have to increase meal feeding or introduce a buffer feed of silage to reduce grass demand,” he concluded.

- Advertisement -
Previous article
Looking for a career in metal fabrication?
Next article
Will marts continue to hold online sales after Covid-19 restrictions are lifted?