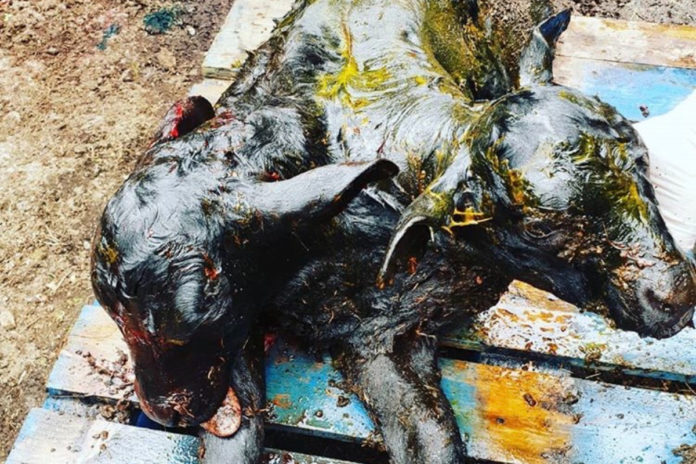 Just when Cavan-based vet, Gerard McGovern, thought spring-calving 2020 was drawing to a close, he was presented with a cow with what he referred to as the “strangest dystocia” he has seen in about twenty-five years.

In a post on his popular Instagram account, he explained that a mature Aberdeen-Angus cow presented with dystocia with both twisted hind legs protruding through the vulva at 1 and 7 o’clock.

Following vaginal examination and a little traction, with no progress, a fetal monster was suspected, so a caesarean section was initiated.

‘Two heads fused into one body’

“The surgery was relatively straightforward until the second head attached to the same body appeared! The calf was alive at birth but died shortly after delivery.”

“The calf had the following abnormalities: two heads fused into one body, arthrogryposis of the hind limb, mild ascites, and no tail (Acaudal).”

“I will leave it to the embryology experts to explain the possible origins & causes of the deformities; suffice to say, it was the most interesting hour’s veterinary work in quite a while.” the UCD graduate concluded.