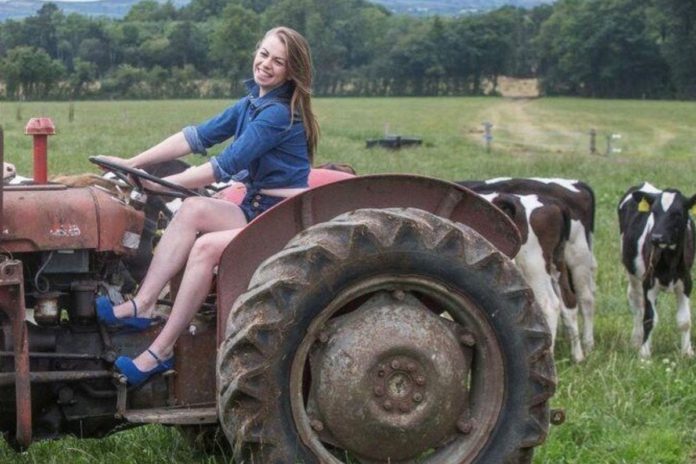 How farming and Macra gave Grace a second chance at life

“You can break a leg, but mental health is something you can’t just fix,” explained Grace Fitzpatrick as she sat down for an open interview with That’s Farming’s Catherina Cunnane.

The 25-year-old completed a year at Kildalton Agricultural College after her Leaving Certificate, but could not continue her studies due to her mental health.

“My life was upside down for a long time and I didn’t know where or what I was going to do. I couldn’t see from one day to the next and that’s very hard for people to understand.”

“I know I tend to go on about it but there’s a huge stigma still felt in the agricultural community that weighs down on a lot of people.”

She admitted that it was difficult for her to reach out to ask for help. “Things weren’t going right, and I had to think of different ways to help myself as I wasn’t ready to give up. I loved animals and that’s where I said my turning point was going to be.”

Grace visited local farmers where she learnt about animal husbandry and how to perform tasks such as milking cows and feeding calves. From here, the Kilkenny native was bitten by the ‘farming bug’ and has never looked back.

She later decided to branch into beauty therapy to help her gain more personal skills and confidence. “At the time I was farming, I felt I still wasn’t able to deal with people and the struggle for me was tough, so I decided to try another job.”

The self-described “beauty therapist in wellies” is currently working for a company in Waterford, but continues to farm regularly.

Grace has her own horse and the farm owner is helping her to expand her agricultural knowledge. “In between work, I always have wellies on. You’d never guess I work in a salon, especially if I’m at machinery open days or tractor runs.”

“There is a huge contrast between my job and farming, which is quite hilarious as it’s so extreme.”

Farming is in her blood, however, as she grew up in the countryside and her grandfather farmed; her uncle and cousin are continuing the tradition and also run a contracting business.

“I love that nothing is the same at any stage on the farm – everything is different and there are always challenges.”

“I love working with animals and enjoy horse riding. When I’m on the farm, it can be an escape from the hectic world, and you can just immerse yourself in nature.”

“I understand the struggles and pressure on farms too, but I prefer to look at what farm life can offer people in terms of mental health and physical activity,” she added.

With her venture into farming, came her membership with Mullinavat Macra. “I asked the farmer at the time what do farmers do to meet other people and he said young people go to Macra and promised I wouldn’t look back.”

“I felt even though I was back on my feet, going to farms each day, I still had barely any friends and was still so lonely.”

“I had no idea what Macra was or could I even join because I wasn’t a ‘real farmer’ as I thought.”

“When I attended my first meeting, I was full of anxiety – I went to the bathroom more than once to get away from people but that’s where Macra began giving me my life back.”

She secured her first position at club level in 2015 and was appointed onto the county executive in 2017. She is the current secretary of Kilkenny YFDG, which involves helping to organise farm walks, talks and courses for members.

Key milestones to date include meeting farmers, travelling to Paris with ICOS, being interviewed about her struggles with mental health by Bressie and Matt Cooper and representing Kilkenny in the 2019 Queen of the Land Festival.

“My highlight of joining Macra is getting a second chance at life because of it.” the Kilkenny native said.

Grace’s goals are to promote mental health, break the stigma and speak about her own experiences on her social media platforms.

She intends to apply to an agricultural college this September, with a view to farming in her own right in the future. “I always felt that it was out of reach especially because I wasn’t on born on a farm and I wouldn’t be able to farm.”

“Hopefully I can inspire someone that’s afraid to take the step, to go for it. It can be quite daunting as it’s male-dominated sector, but women are just as good, if not better!”

“It’s time to dispel the view that farming is just for men. Unfortunately, there still is a lack of respect for women in the sector – we all need to support each other, whether you are a woman, woman in ag and a woman interested in agriculture.” Grace concluded.

If you are a woman in agriculture and you want to share your story, email – [email protected] – with a short bio.