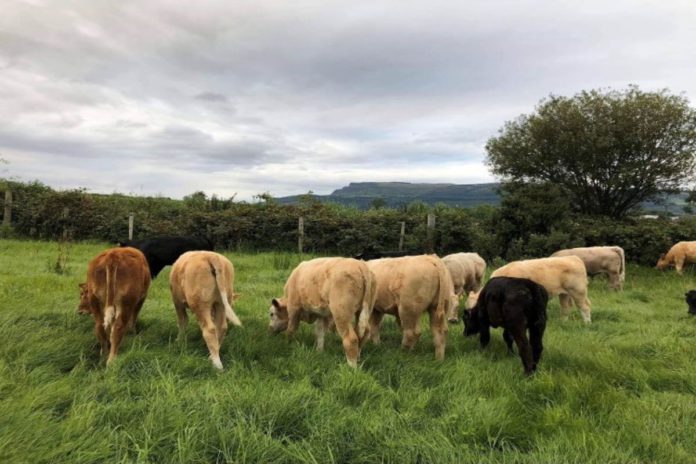 Gareth Neely is suckler farmer in, Co. Derry, where he farms 80 suckler cows on 200-acres alongside his father.

He has been farming for close to eighteen years after graduating from Greenmount College.

His father owns a plant hire company and Gareth worked for him for a period after college before deciding to farm full-time. The farm was originally 140-acres of permanent grassland and 60-acres in tillage, but last year, Gareth decided to reseed 50-acres of the tillage ground and put it back into grass.

“I’m pushing to get it all into grass. The crops just aren’t working out unless you have big acreage. It would have been barley and wheat. We were using the straw ourselves and most of the grain for feeding and any that was sold was sold locally.” he told That’s Farming.

Up until 2018, he was breeding Charolais and Limousin cattle and finishing them as bulls, but the economics of this system was not viable for Gareth.

“Finishing bulls wasn’t working, we were putting too much meal into them. We’re working now with Angus, Shorthorn and Belgian Blue, this is our first year calving to them. I’m trying to push more towards selling stores and replacement heifers. I will finish some of the Angus though because of the Angus scheme.”

Gareth got into suckler cows about seven years ago. Prior to that, his father would have bought store cattle and finished them. The price of stores became too high at this time, so Gareth decided to make a change.

“I went to the mart one day to buy stores and ended up coming home with in-calf suckler cows. They were making the same money as stores, I thought ‘this can’t be right’, so I said we’ll have a go at these and it has worked out.”

The Derry man aims to calve his heifers at 24-months and does his utmost to make sure that they continue to go into calf each year. He says that he runs a ‘tight ship’ on his farm.

“We have no problem getting them in-calf or the next year either. We always weigh our cattle and we aim to get them to around 450-470kg, definitely no less than 400kg. They go to the bull and calve down at 24 months or so.”

“We don’t want big cows. A lot of men are looking for big frames of cows, a small cow is no use to them. We’ve tried big cows and they’re no use because they eat more and are harder on the ground. The smaller cow will have plenty of milk and that’s the key to it I find.”

Neely saw all that went on in 2019 south of the border in terms of protests and blockades against the price that beef farmers were getting for their produce. He says things are not much better on the other side of the border.

“It’s no better. If you talk to anyone and they ask what you farm: you say ‘suckler cows’ and they immediately say it’s a waste of time. We have to run a tight ship here – Anything that’s not in-calf is sent out the gate. We’re calving tight as well, all spring-calving.”

“Normally we don’t sell this time of year, we like to give them a few months on grass first. If marts close up we’ll get tight for room with cows calving. We’ve nothing outside. This time last year we let out 30 heifers and they never came back in.

After reseeding much of his tillage ground, Gareth has more ground for his sucklers and hopes to expand his herd in the future.

“120 cows is where I want to end up at. We’ve got the ground here for it and we need to make use of it. There’s some ground there we’re just cutting for silage. We bought in 8 heifers about a month ago, but I like to try and breed my own if I can.”

Neely told That’s Farming that all those years ago he could have left the farm and joined his father in the plant hire and construction industry, but he could not deny his passion and decided to do what he enjoyed. He hopes that he will be able to do so for many years to come.

“What I enjoy doing is farming and that’s what I plan to do,” he concluded.

- Advertisement -
Previous article
Mart Quiz: How much did these sheep sell for?
Next article
Covid-19: Farmers, have you a plan B?