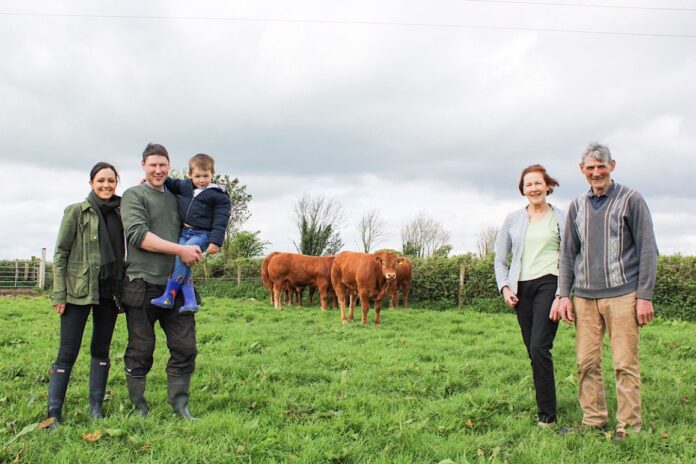 In this week’s Suckler Farmer Focus, That’s Farming, speaks to Dermot Shaughnessy, Co Galway. He discusses farming with his parents and wife, using 100% AI on his herd , achieving €2,990 for a commercial heifer, and selling 25 pedigree bulls a year – with huge demand.

Growing up, Dermot Shaugnessy always enjoyed farming with a desire to become a teacher.

Today, the Castlefrench, County Galway-based farmer juggles both jobs, a mixed farm with his family and a full-time teaching position in Coláiste an Chreagáin, Mountbellew.

In 2004, Dermot graduated with a Bachelor of Education from UL. In 2007/2008, he completed his Level 5 and 6 Green Cert online with Mountbellew Agricultural College. The farm consists of 190-acres of owned land and 60-acres of rented land.

In addition, they also buy 300 store lambs and 100 Suffolk-cross-Mule ewe lambs that they sell in August as ewe hoggets.

The enterprise is also home to 40 horses across different Irish horse breeds, which Jack, his nephew, assists with.

The family’s horse stud was also home to many other stallions over the years, including, most recently, Clew Bay Bouncer (RID), Ard Grandpa (RID), Sheer Danzig (TB) and Sweetwall Captain Courageous (Con) – who are all deceased now. Before the year 1984, the family operated a dairy enterprise.

“I enjoy farming and seeing quality calves born each year and, in turn, watching top-quality pedigree bulls and heifers going on to produce quality calves for our clients.”

“I always wanted to be a teacher. It is great that I can also run the farm alongside my job with a lot of help from my mother, Catherine, father, Martin, wife, Lisa, and son, Mark, even though the farm is very intensive – the way we work it.”

“For example, a lot of time goes into calving and inseminating cows using AI, and then the stallions get busy from April until July.”

In 1984, his father, Martin, established the Lisnadell herd by purchasing a pedigree Limousin heifer.

His son, Dermot, who has been farming alongside him since 2012, now runs the herd under the Lisna herd prefix.

Their preferred Limousin cow goes in calf easily to AI, calves easily, has plenty of milk, is docile and “most importantly, has a calf of good quality every year”.

Limousin is the predominant cattle breed on their farm. In Dermot’s opinion, they are a “very versatile breed and can be crossed with most other breeds to suit the market at a particular time”.

The family have mainly bred its own replacements. Still, they buy a few heifers now and again if they come across “one with enough of quality”.

They use 100% conventional AI on their cows and run three Friesian-cross teaser bulls.

They let cows run one to two cycles after calving and then AI them in the first week of November – with most autumn calving cows cycling within three weeks.

In addition, they also use a MooCall HEAT collar for spring calvers when they get to grass.

Nine years ago, the family changed their breeding programme to all AI. They wanted to use a wider variety of bulls that would suit all the different cow types in the herd and use the top genetics available. 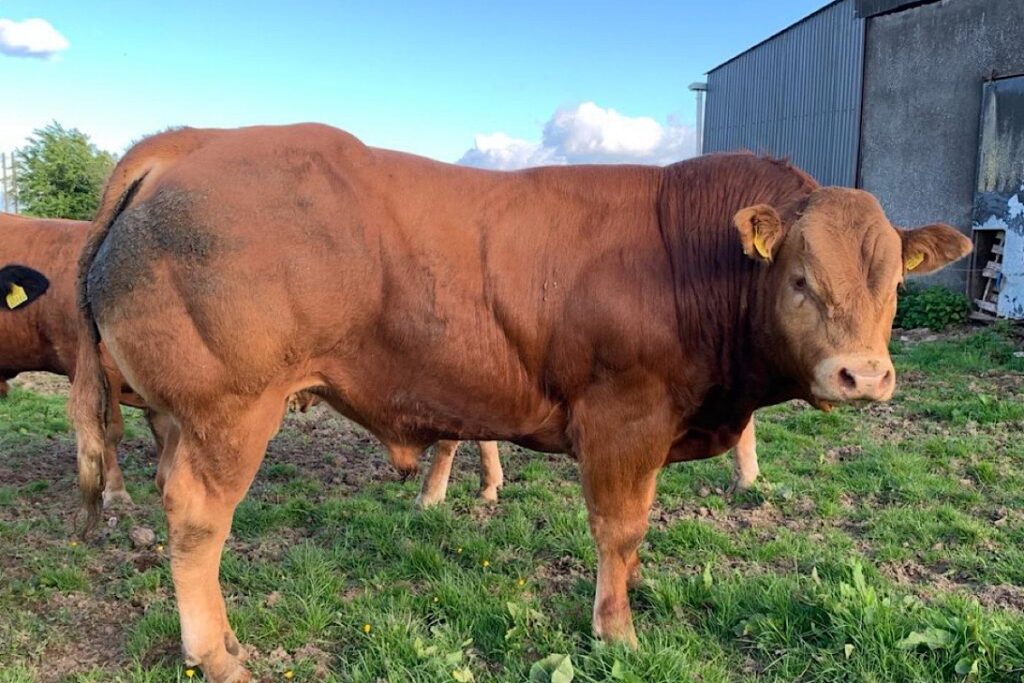 “My only problem with the genetic pool is the star system. Most of our clients looking for bulls are looking for a five-star bull, which restricts us from using some great bulls out there that are low on stars.”

This summer, the family plans to enter their first bull, Lisna Sir, into The National Cattle Breeding Centre (NCBC).

According to the family, Progressive Genetics and Munster Bovine will have semen available from this bull in the autumn. The bull is by Tomschoice Lexicon (LM4471) and out of a Lisna Nande cow (On-Dit).

In addition, the Galway family plan on completing some ET work on some of their pedigree Limousin cows towards the end of this year. 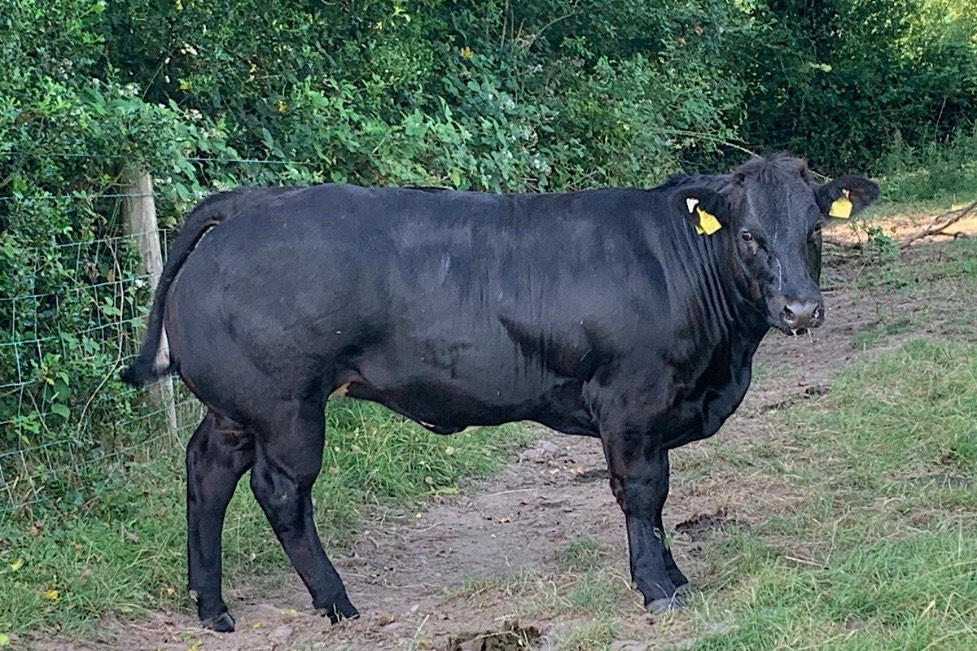 They calve most cows in August and September, splitting their workload. It also helps reduce housing requirements and aligns with Dermot’s work schedule.

They use a calving camera and check on cows near calving morning, evening, and last thing at night.

“I was bulling some heifers at 15-16-months and calving them down at 24-months, and I did not like it because it took too much out of heifers, and it took them a long time to come back into heat.”

“Also, if they are calved inside in September and October, and you put them on slats, you have to isolate them to feed them.”

“I could not do that because the stronger cows were with them, and they were bullying them. So, I do not bull any heifers until 24-months anymore.”

According to the family, 90% of the herd calves without intervention.

They achieve a herd’s calving interval of 370 days by having a strict culling policy for cows that do not go in-calf after two AI services. 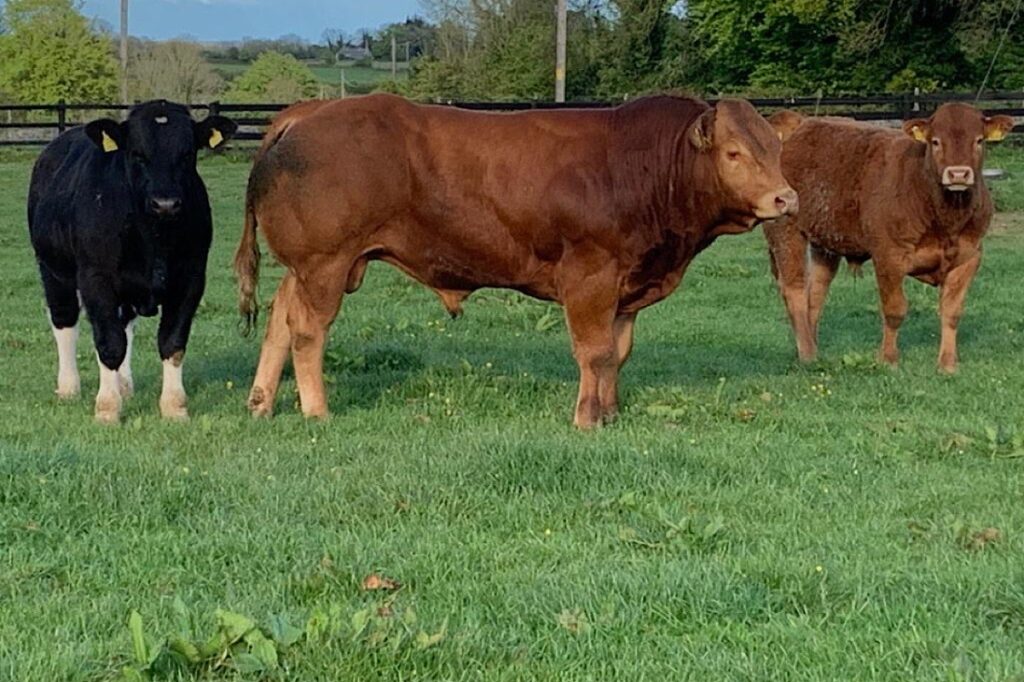 They introduce six to ten heifers per year to the herd and cull two or more cows annually – depending on the year, which go to Kepak Athleague or Ballinasloe Mart.

The Galway-based farmers have a strict culling policy for lameness, injury, poor breeding, docility, and age, which go to KEPAK Limited Athleague or Ballinasloe Mart.

“I have no problem selling them all on-farm. I have only young bulls left now as there has been a huge demand for quality bulls already this year.”

“Customers who have come to me before keep coming back to me as they are very happy with bulls.”

“The majority of suckler farmers in the country have off-farm incomes, and they do not want any hassle with cows calving and calves that get up and suck their mother quickly.” 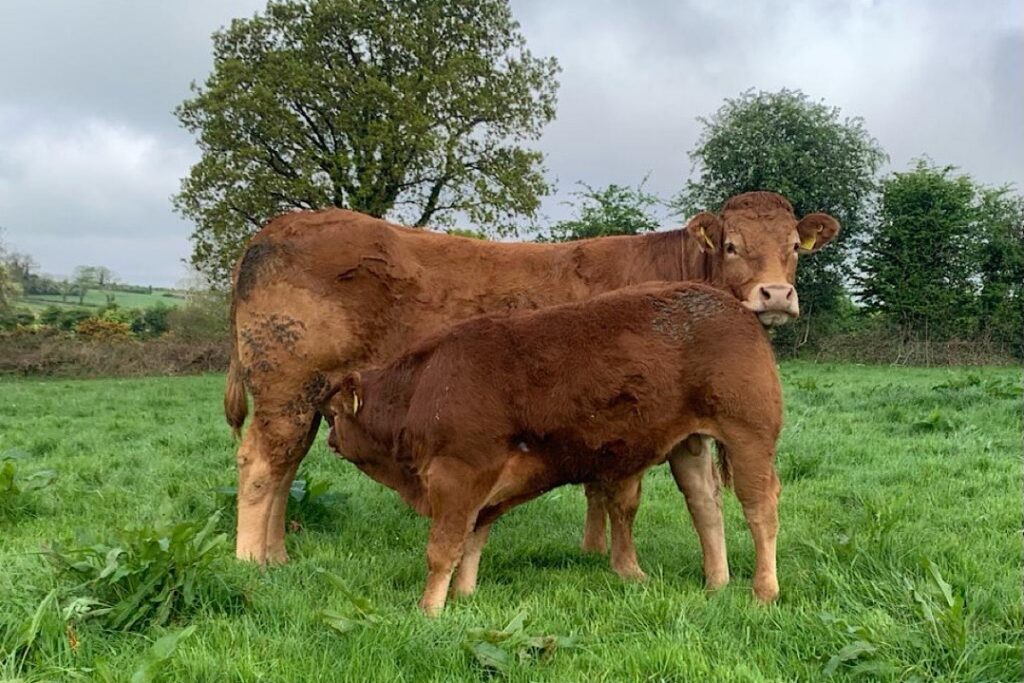 Commenting on what success means for them as pedigree cattle breeders, the Irish Charolais Cattle Society and Irish Limousin Cattle Society members said:

“Success to us is that people come to us every year looking for bulls, and they are very happy with the bulls and keep coming back.”

“Also, they give us a decent price for the bulls, and they are happy with the price they are paying.”

In 2021, the family achieved champion for a ten-month-old Belgian-Blue-Limousin-cross heifer at the autumn calver sale in Ballinasloe Mart, who made €2,990 and weighed 490kgs.

Other successes include winning champion heifer in 2018 and champion bull in 2016 at the sale. 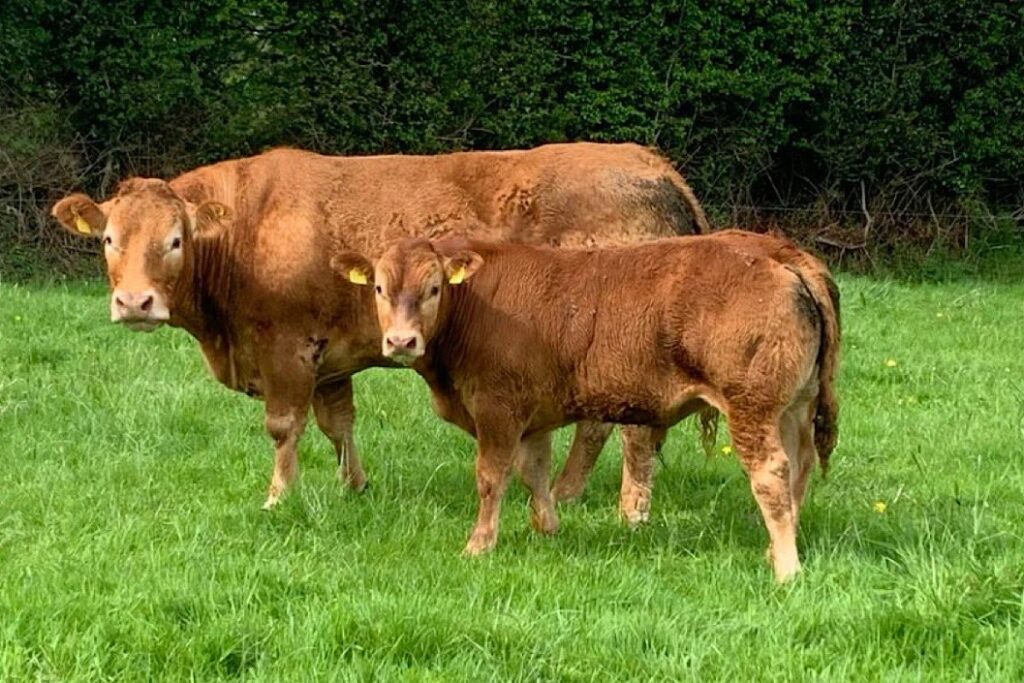 The family manage their farm in a rotational system for grazing cattle and reseed one land parcel per year.

“All land is in grass, and all stock are run together to get the best value from the grass.”

The farm makes round baled silage and pit silage in the first week of June annually. Other fodder they feed cattle includes haylage and round bales of hay.

“The challenges between balancing work, family and farming are not easy. My parents and my wife help on the farm as much as possible. I could not do what I am doing without them.”

The family said that if input costs do not come down next year, they are considering reducing their stock numbers slightly to offset these rising costs.

“However, we all like that type of farming, and we stick at it. The commercial side has taken off in the last number of years with the price of these very stylish commercial heifers.”