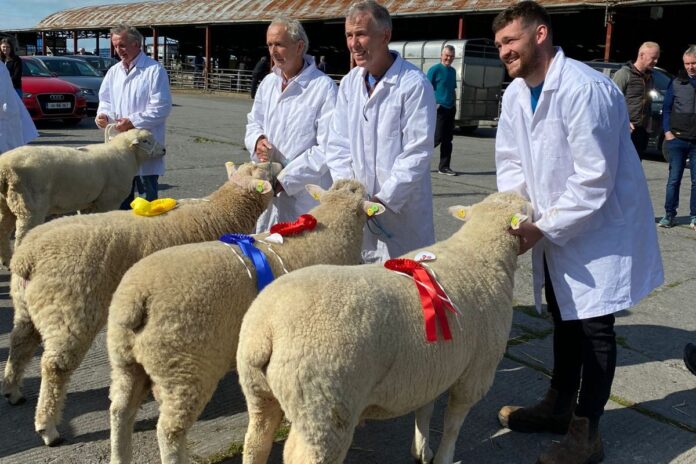 Galway Sheep Sale: All records broken with prices to €1,680

All price records were broken at the centenary show and sale of Ireland’s native sheep, the Galway, at Athenry Mart on Monday, September 19th, 2022.

That is according to Blátnaid Gallagher of the Galway Sheep Breeders’ Association, who reported that a “strong” entry of 100 females and 26 rams came under the hammer.

“With a surging interest in dual purpose breeding, the Galway is leading the switch to better returns for sheep farmers.”

“There is now €2.50/kg for her snowy white wool, and now a growing interest in the succulent marbled and richly flavoured grass-fed lamb. It is hard not to recognise the tipping trend to a breed that thrives easily on a grass-fed system.”

The Galway Sheep Breeders’ Association has watched over and meticulously maintained 100 years of breeding records.

She stated that there is an “ever-expanding” market for slow food with clear provenance, and this, she explained, is pushing demand for the native breed of succulent Galway lamb.

“Galway breeders are returning to the tried and tested method of genuine farm to fork: produce, supply, butcher and enjoy local food. It is a secure and honest food supply chain that has worked for hundreds of years.”

“We have done it with our wool, and now our lamb has started to appear at local artisan food sellers, such as Suck Valley Farm, who trade every Saturday at the recently established Mad Yolk Food Market.”

She added that the show and sale figures are a testament to the return to this, which brings Ireland’s premier dual-purpose breed “front and centre stage of Irish sheep farming once again”.

Gallagher explained that she was “unsurprised” by this re-emergence of interest at the sale, which attracted new breeders from across Ireland, from Donegal to Cork and Meath.

“They all were interested in one thing, the returns: achieving these rewards with the establishment of direct routes to market for our wool and now our richly flavoured heritage lamb.”

“Never before had there a been scene like it. With all ringside seats packed to capacity, it left new breeders and others interested with standing room only around the ringside.”

“As the hammer dropped, lot after lot was greeted with rounds of applause from the ringside,” she concluded.