In this week’s dairy segment, That’s Farming, speaks to the Armstrong family. Enda Armstrong, a Galway farmer, discusses going into partnership with his father, working overseas, herd expansion, switching to spring-calving, growing 14.6/t of grass and the sector’s challenges.

Enda and Gerard Armstrong, from Kilcolgan, Galway, entered an official farm partnership over a year ago and run a 140-cow herd on an 85-hectare enterprise – consisting of mainly owned land.

The cows are 75% Holstein Friesian, 25% British Friesian and 20% Jersey breeding.

In 2012, Enda (who works on the farm full-time) graduated with a Bachelor of Business in Rural Enterprise and Agri-Business in GMIT in conjunction with Mountbellew Agricultural College.

He furthered his skillset in the agricultural sector by completing a BAgrSc (Hons) (NFQ Level 8) Food and Agribusiness Management at UCD from 2013 to 2015 before returning home to farm in 2019.

In between his studies, Enda travelled to New Zealand and worked on an 880-cow dairy farm of mainly Friesian cows in the Waikato region.

After graduating from college, he lectured at Mountbellew Agricultural College for two years. He taught part-time Green Cert students and distance education courses in year one.

After that, he travelled to Australia to work on a dairy farm with 550 Holstein Friesian cows in the southeast and worked as an operator in an agricultural contracting firm in western Australia (completing 600-acres of silage).

“My father Gerard has been milking cows since day one. When my grandfather, Michael, was farming, everyone was milking cows,” Enda Armstrong, chairman of South Galway Macra and County Galway Macra, told That’s Farming.

“When I was a young person, we had dairy, beef, and sheep, but we got out of the sheep about twenty years ago.”

“We decided that we were more interested in the dairying side of things. It was very hard to have both, and then lambing and calving at the same time, so it was not ideal.”

Their desired cow type is a weight of 525-550kgs, has ease of calving, trouble-free and can produce 500kgs of milk solids plus 5,000 litres.

“We went for the Jersey breed to try to bring up our milk solids. We are in a spring-calving system, so you are getting paid for your milk solids. With the British Friesian background in the herd, the proteins would have been around the 3.2%.”

“In my opinion, that was not ideal for the situation or the goal we wanted. We were aiming to produce 450kgs of milk solids this year.”

“So, to get there, we needed to bring some Jersey blood into the herd.”

“We went away from Jersey cows now because we can see the Friesians give as good as milk solids.”

“In my view, genetics have improved so much on them. So, we have gone towards Friesians, plus we do not want the issue of getting rid of Jersey bull calves.”

“In my opinion, it is hard enough this year to sell Friesian bull calves, not to mind crossbreeds. I do not know how farmers with Jerseys and crossbred bull calves are dealing with it.”

According to the family, 720kgs of concentrates per cow (with some silage) achieves the above performance data.

The herd grew gradually by retaining replacements. It has 140 cows at 3.5 LU/HA for 2022 – due to additional land on the milking platform. The family previously stocked “highly” at 4.2 LU/HA.

“With the extra ground in the milking platform, I feel we will be able to bring it down to a more manageable 3.5 LU/HA rather than pushing so hard to 4.2 LU/HA.” 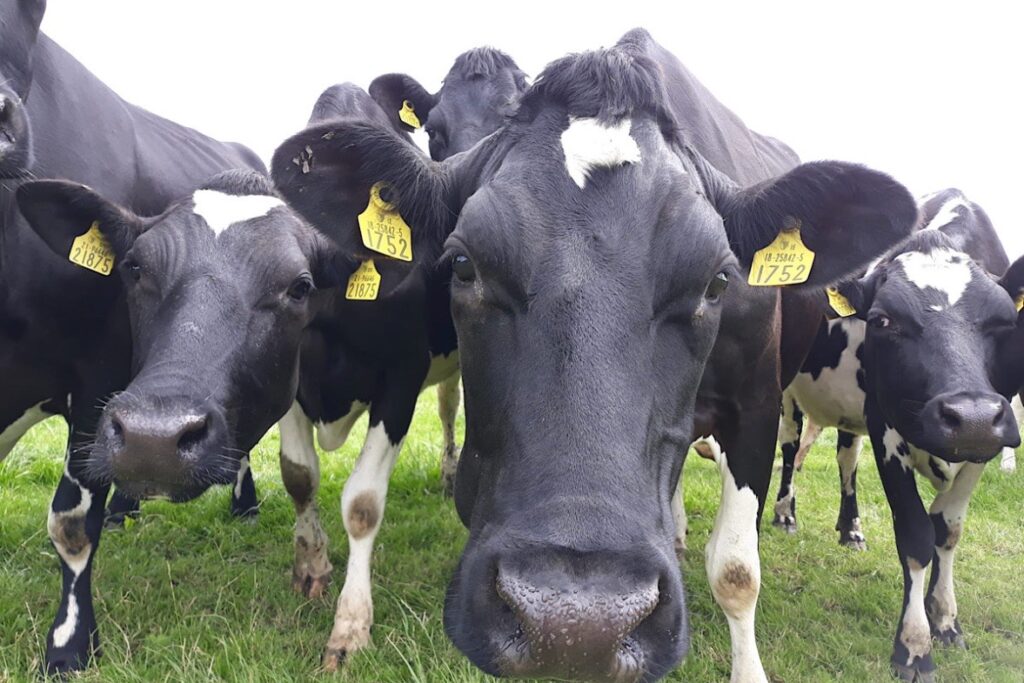 The father and son AI their cows for four weeks and then introduce their Hereford and Angus stock bulls to mop up.

“We usually swap the two stock bulls every day to ensure they are not overworked. So, we have two or three bulls for the cows and two bulls for the heifers.”

“However, we usually leave the two bulls with the heifers at the same time, whereas with the cows, we swap them after milking in the morning.”

The family identify their ideal cows to give a dairy-sired straw in the first four weeks and select a beef sire for their poorer performing cows.

They select their bulls based on an EBI of €288-€360, focusing on proteins, PTAs, and milk solids.

They use a team of nine AI bulls for cows and five bulls for heifers.

“There have been big improvements in the genetic pool over the last few years.”

“In my eyes, there is a lot more of a selection there, and there are a lot of bulls available that will suit the criteria for me. I would be very happy with the selection of straws available.”

Gerard previously milked all-year-round, but the pair now opt for a spring-calving system to allocate downtime between calvings and to enable them to participate in their hobbies, e.g. Enda’s involvement in his local hurling club, Clarinbridge.

The Galway farmers calf heifers at 22-24-months – with “most” heifer calves” arriving in February.

According to the family, cows require very little intervention during calving, and the herd’s calving interval is 368 days.

“I like to keep heifers calving early because when they are any older, they are putting on fat on themselves, condition, and you will have calving difficulty.”

“They will just never perform for you and will not put milk in the tank because they will be looking after themselves.”

“You will have a lovely fat cow to look at when she is out in the field, but she is not performing or giving you back what you want.”

“So, I think to calve them on time from 22-24-months-old you get the days of milk out of them, and you get the performance.” 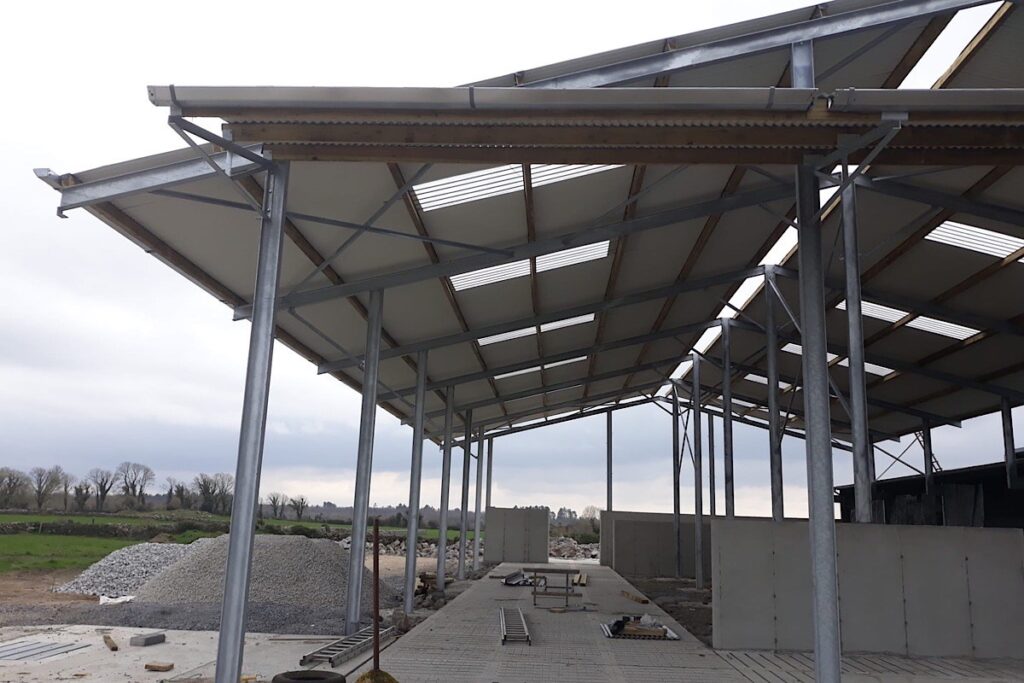 The Galway father and son intend to keep 30-40 replacements – and plan to sell their excess females this year.

The pair sold 18 in-calf heifers last year, and before this, the herd maintained a 100% replacement rate.

“The numbers give you the flexibility to access different options either by improving the genetic gain by moving on a few older cows that are not performing, keeping the heifers or having the option of selling on heifers for cash flow in the future.”

They sell most of their Friesian, Angus, and Hereford bull calves at 2-3-weeks-old in Athenry Mart, with some on-farm sales.

The family measures grass once a week and every four to five days during the peak growing season, which equates to 40 grass walks annually.

According to the Armstrongs, they grew 14.6t of grass on their milking platform last year.

“Grassland management is a vitally important practice on the farm. It is all about getting grass at the right stage and ensuring we have enough of it.”

“In my view, the best way to do that is measuring grass. So, it would be one of the most important jobs.”

The family are members of Grass 10 South Galway Grass Group and the Galway Grazers Discussion Group.

The family milk in a 20-unit DeLaval milking parlour (with automatic cluster removers).

They built the parlour in 2003 as a 10-unit and then extended it to 16-units. Then, two years ago, they added on four units and installed automatic cluster removers to bring the parlour to 20-units.

“I feel that is as big as the parlour will ever get. You could milk 200 cows with that parlour as it is only ten rows. “

“We are maxed out with land, so there is nowhere for the milking platform to go. So, I cannot see the herd going any bigger than 140 cows.”

“I think the sheeting for the shed I am building is gone up 25% from what it was. So, everything is going up, and there is no sign of it coming back down.”

“We are in the nitrates derogation, so we are watching what we are doing. There are big challenges. We are doing everything we can to meet them environmental challenges.”

“We have the dribble bar, and all our slurry is spread using the low emission slurry spreading (LESS) method.”

So, I am putting it down to a combination of the protected urea and low emission slurry spreading (LESS). We utilised both of those last year.”

The family intend to “consolidate” their cow numbers, operate a “simple” system, improve grass growth and increase milk solids to 500kgs with 450kgs, the aim for 2022.

“I have no intentions of growing the herd any bigger. Furthermore, I think 140 cows are enough. I am trying to focus on quality more than quantity.”

“Dairy farming is as positive as it can be. These things come in circles, prices go up and down, but that is farming. That has always been the way; everything goes in circles.”

“I am hoping to be in a good position long-term because we are established as a dairy farm for a number of years. We have not large repayments on a lot of infrastructures.”

“Dairy farming will be tough in some years, but my outlook for it is positive overall.”

“I feel there will always be a global demand for milk. I think we are producing the most environmentally friendly milk possible.”

“Also, I think there is a demand for milk. It will have its ups and down years (like everything), but I think overall, with the balance of the whole thing, it should be quite positive and good,” the Galway dairy farmer concluded.

- Advertisement -
Previous article
17ac ‘unique’ landholding by the beach for €350,000
Next article
‘People who gift a bag of turf to a neighbour would be criminalised’