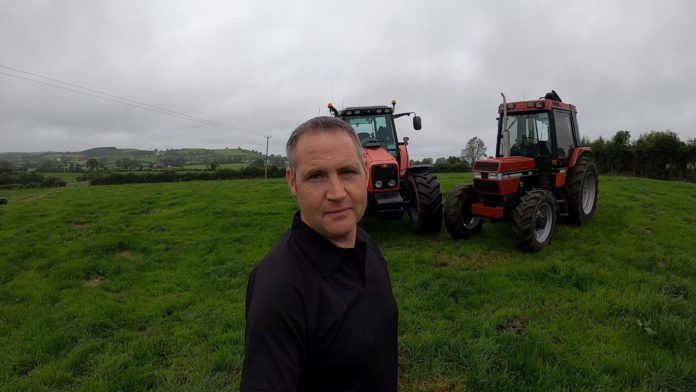 From taking over the farm at 22 to becoming a YouTuber

Adrian Morris is the man behind the popular IFarm WeFarm YouTube channel, which boasts over 20,000 subscribers.

The Cavan native divides his time between farming, family commitments, and his YouTube channel.

Morris completed his Green Cert at Ballyhaise Agricultural College in 1999 and worked on various dairy enterprises after that.

Adrian managed a 130-cow dairy farm for four years before returning to the family farm where he has remained ever since.

He took over his family farm between Cootehill and Baileborough at the age of twenty-two when his father retired.

“My father bought the farm in the early 1950s, and farming has been the number one thing. I have always been involved with animals; they always came first, and machinery came second,” he told That’s Farming.

Adrian believes a family farm is one of the best places to raise the next generation. He has four daughters: Danielle (11), twins, Nicole, and Sophie (10), and Alayna (6), who are following in his footsteps.

Danielle, Nicole and Sophie are classed as ‘Irish triplets’. “They all have the one birthday and were all born within the same year.” he laughed.

His parents, PJ and Bernadette, and wife, Sinead,  have also been a huge support to him.

Morris relishes the idea of capturing his adventures through the eyes of a lens and first joined YouTube under the Sky Eye Photography handle.

He acquired his first drone when he was 16-years-old, and later purchased other pieces of equipment.

“The Sky Eye Photography channel was purely just as a hobby, and it got a great response with a huge following from a very short time.”

“Photography and videography have always been a passion of mine. I used to record things since I was eight or nine-years-old. I remember stealing my older brother’s camcorder when he was at work and making little clips and putting them together.” 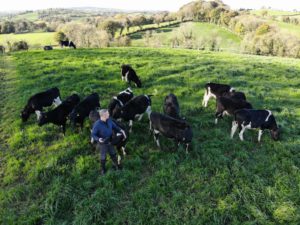 Photography and agricultural, two of his fundamental interests, blended for the Cavan man back in 2015. “My agricultural contractor spotted that I had a drone and asked me to do a film of him with his equipment.”

The construction of a new cattle shed provided an amble YouTube opportunity back in 2019. His wife suggested filming the construction process from beginning to end.

This series marked the beginning of the current YouTube channel, which is popular worldwide.  “I made my first video on the shed and tank going. It snowballed, and 14 months later, our views have significantly grown. Also, we have more than 20,000 subscribers which has blown us away.”

“The most difficult part is the time that is required for a YouTube channel, but you have to make the time. Each night, I could easily spend up to three hours editing a video for the next day.”

Adrian began posting videos once a week but now aims to post two videos weekly. “I am a one-person show. I do all the work myself. It is something I enjoy doing; you have to have a love for it.”

Adrian feels that YouTube has opened a lot of doors for him in terms of networking opportunities.

“In farming, a lot of people can be isolated, especially with Covid-19 restrictions. YouTube, for me, has introduced me to people. I have never met from all over the world.”

“Businesses were struggling, especially agri-businesses, as there were no Ploughing Championships or agricultural shows that they could showcase a product.”

“You will find they approach you and they are happy for you to show their products. It helps them, and it helps me, so it’s a win-win.”

“Also, we have had to put off a lot of viewings on the farm because of Covid-19, with restrictive measures and the lockdowns.”

When circumstances allow, Adrian wishes to honour all these sponsorships that are coming his way.

The first 14 months of the channel may have been a case of “trial and error”, but it has proven to be a significant success with over 2.5 million views.

“Last month, we did a demonstration that we would put up a steady two videos a week to see how it would go. Our channel hit 800,000 views in one month, which was incredible for us.”

“I pulled up outside my old secondary school last week, and I went into the shop across the road. When I came out, there was a line of students, roaring and cheering my name out. I get great support wherever I go.”

“We will continue our efforts, being ourselves and showing what we do,” Morris concluded.

- Advertisement -
Previous article
Teagasc predicts more suckler farmers will switch to finishing dairy calves
Next article
Beef prices in Northern Ireland: How much are they ahead of the south?