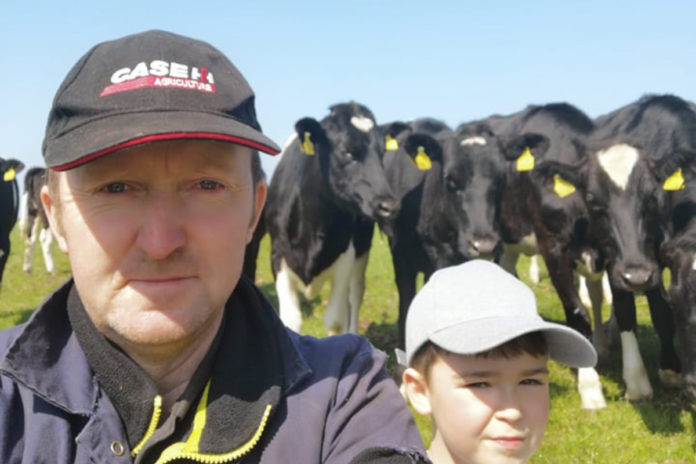 He took the reigns of the enterprise back in 2014, after spending a number of years in the landscaping industry alongside his brother.

“The farm was set at that time, so I decided to go back and make a good go of it,” he explained to That’s Farming.

He currently has 42 cows going through his 8-unit parlour and the foundations are already in place to increase the milking herd, including the introduction of an autumn calving herd.

“There were 16 cows that didn’t go in calf last year, I think because I stopped the AI a bit soon, so I milked those on and put them in-calf again and they’ll calve now for the winter.”

“I have another 8 heifers as well, so I will have 24 to calve in late summer/autumn and we’ll be hitting up over the 60 mark.”

“For next year, there are 24 bulling heifers to come into the herd, so we will hit the 80-mark next spring, pretty much doubling what we have now.”

This will be Murphy’s first time testing an autumn calving system and this fall will determine whether he will carry it on into the future.

His main focus with the autumn calving herd will be the diet and the output of the cows. He recently enlisted the help of Alltech nutritionists to assist him in formulating a diet that will increase the solids of the cows and the overall herd performance.

“This is my first year having them on board and going forward I’m going to worker closer with the nutritionist and concentrate on what the cows are putting out. He really knew his stuff about what they’re doing and what they’re capable of doing.”

The cows on the farm are British Friesian, which is a change from the breeds they kept when his father was working the land.

“We would have had Holstein cows back in my father’s time and they were great to milk, but they only lasted 2 or 3 years. This time, I bought the first 25 cows from a farm in Kilkenny that was breeding them.”

“It was the best decision I ever made because your base stock were starting from a good point. They were well-bred stock and he had all the figures behind them. Back in my father’s time, we would have bought cows in auctions and you don’t know anything about them.”

Breeding is underway on this farm, with Michael entering his 4th week of AI. He has decided to use Friesian semen on his heifers as well as his 1st and 2nd lactation cows. The older cows will be given an easy calving Belgian Blue straw.

“We went all Friesian last year and when I look back. it wasn’t ideal. You end up with too many bull calves that are worth very little, so there’s no money at the start of the year to start you off. It was actually costing me money.”

“The main thing this time-round will be getting them all back in calf – because a cow not in calf will be the dearest thing of them all.”

With almost double the number of cows expected to go through the parlour next spring, the Wexford native has had to prepare his grazing platform for the increased demand.

“I have reseeded about 80 or 90% of the farm over the last 5 years. When we started reseeding it was a real eye-opener. When the cows go onto the reseeded paddocks you could see the extra milk in the jar that evening.”

To maintain the supply and manage the grazing rotation, Murphy walks the entire farm twice-a-week, which is something he is a big believer in.

“I believe that even if you’re not measuring grass, you definitely do have to walk the farm to see what’s out there.”

While he has been driving the efficiency on all aspects of the farm, he’s not as inclined to drive up the stocking rates to an unsustainable level. He told That’s Farming that he will be comfortable with a herd size of between 75 and 85.

“There are only 90 acres here and I don’t want to push it too hard. If a bad year, came you’d be in trouble with cows out ploughing the place. I would be cautious about going to the absolute limit,” he said.

And as he now draws closer his desired number of cows, the Wexford man is optimistic about his future in the industry.

“I’d say dairy farming, in general, has a good future. It’s a tough battle but I think keeping a control on costs would be what I’d be doing. It’s not for the faint-hearted, it’s a tough station.”

- Advertisement -
Previous article18-year-old killed in farm accident
Next articleWeather: Rain is here, but when will it stop?