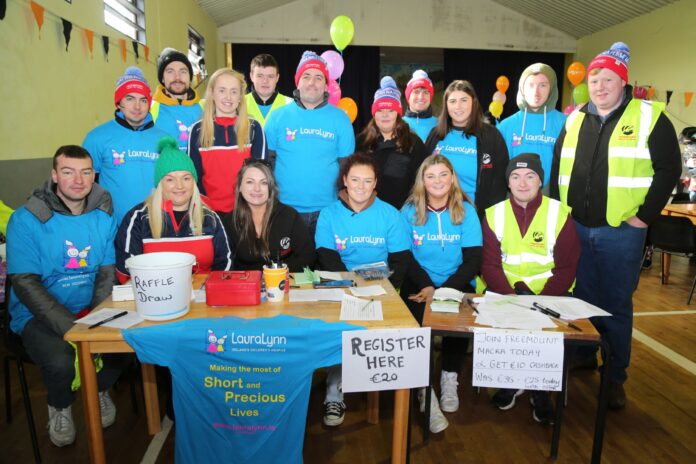 Freemount Macra has, to date, raised €5,500 for the Laura Lynn Foundation through its fundraising tractor run on Sunday, January 15th, 2023, the club has revealed to That’s Farming.

Organisers have confirmed to this publication that its GoFundMe page will remain open to donations until the end of this week (week ending Sunday, January 22nd).

According to a spokesperson, the tractor run “exceeded club members’ expectations” as participants began to descend on Lismire from 11.30 am, with close to 120 tractors taking part on the day.

People from around the North Cork area and beyond converged to the village of Lismire and travelled on tractors through the areas of Lismire, Newmarket, Kanturk, Kilbrin, and Johnsbridge.

“Freemount Macra’s club members would like to sincerely thank each person who supported our fundraiser in any way.”

“It was overwhelming to see the support in such force in the form of partaking in the run, monetary donations, raffle donations and sponsorship of refreshments for the day and, of course, the use of the fantastic facility at Lismire hall.”

“Many people came out to support along the roads and at the hall. With dry weather and the appearance of the sun, the club could not have wished for a more suitable day.”

“It created an electric atmosphere for all ages! Afterwards, there were refreshments and a raffle with some amazing prizes in the Lismire GAA Hall.”

“It was fantastic to see smiles on so many faces after the day, and the club hope to see the same faces and more next year.”

The chosen charity, LauraLynn, is Ireland’s only children’s hospice providing palliative and hospice care and support for children with life-limiting conditions and their families from all across Ireland.

LauraLynn receives €1.5m core statutory funding per year, which equates to approximately 33% of overall running costs for the hospice.

Therefore, it relies primarily upon fundraised income to fund its hospice services.

Freemount Macra Club’s next event of the 2023 calendar will take the form of a party in March to mark its 60th anniversary.