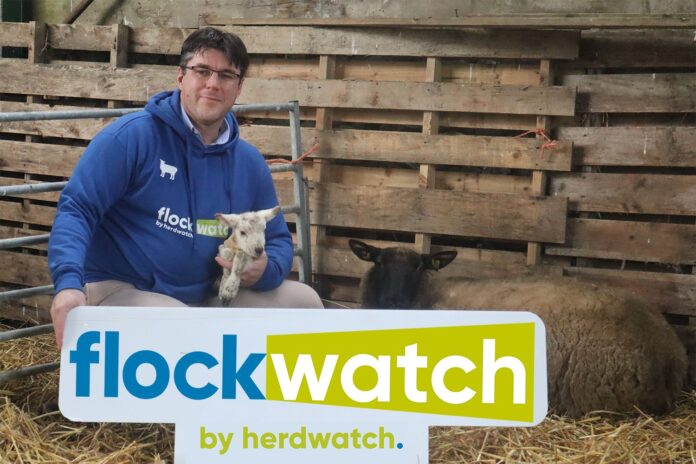 Herdwatch has invested over €500,000+ in its Flockwatch service, which it claims, will “help farmers turn their data into profit”.

Herdwatch claims that Flockwatch will allow sheep farmers to:

“When we launched Herdwatch, we set out to help farmers reduce the overwhelming amount of paperwork required for farm compliance.”

“Since then, Herdwatch has evolved into an app that is as much about monitoring herd performance as it is about compliance.”

He said that Flockwatch will “do the same thing” for sheep farmers by allowing them to track flock performance and health individually or in groups in one simple to use app.

He said it “really shows” the firm’s “direction of travel”, by taking “the best” of what it has learned from working with cattle farmers and applying those learnings to different farm enterprises.

“Our company mission is very simple; we are laser-focused on the digitalisation of farming for the benefit of farmers to make their businesses more sustainable and profitable where”

“Flockwatch is another example of how we will deliver on this mission.”

“Up to this point anyone who wanted to manage their flock had had very little to choose from, with most relying on pen and paper, and the famous biscuit tin.”

“With Flockwatch, sheep farmers now have an app at their fingertips which will allow rapid capture of lambing, breeding, weighing, medicines records and more.”

“The Flockwatch app will highlight the best and worst-performing ewes to make better decisions for the following season,” Peyaud concluded.

Farmers can download the Herdwatch + Flockwatch app for free.

- Advertisement -
Previous article
Almost 2,000 head on offer at Carnew with prices to €2,400
Next article
Mart quiz: How much did these cattle sell for?