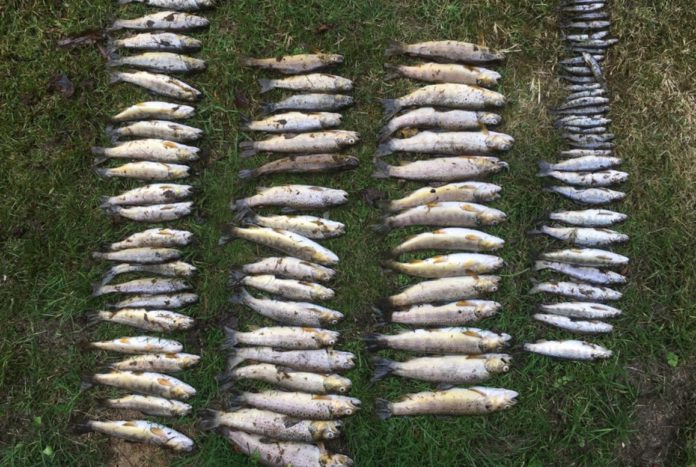 A judge has ordered a farming company to pay over £11,000 following a fish kill.

A J Sing and Son Ltd, of Pillavins Farm, near South Molton, pleaded guilty when they appeared at Exeter Magistrates Court on Wednesday, July 28th, 2021.

Judge DJ Matthews quoted an environment agency fisheries enforcement officer, who said: “the fish kill was the worst he had seen in 30 years”.

Ryan Adams, an employee of A J Sing and Son Ltd at the time of the incident, also pleaded guilty. He was fined £667 with costs to the tune of £2,000.

On Wednesday, July 31st, 2019, environment officers were called to a fish kill on the River Mole near South Molton.

The court heard officers recorded more than 9,000 dead fish in the 4.7 kilometre stretch of the Mole.

They discovered salmon, brown trout, sea trout, bullheads, stone loaches and minnows. Furthermore, they estimated the total number of dead fish to be around 15,600. Whole populations of salmonids, from mature adults to fry, were wiped out.

The cause: Anaerobic digestate

Environment officers found the cause of the fish kill to be anaerobic digestate. A J Sing and Son Ltd had deposited it onto fields the previous day.

The deposit of digestate was from a leaking pipe, which had been spilt on July 30th, 2019, during land spreading operations, and left on the land. The digestate made its way to the river after heavy rain washed it off the land into a tributary of the River Mole.

A J Sing and Son Ltd

Alun and Amanda Sing are directors of A J Sing and Son Ltd. It grows crops to feed the anaerobic digestion plant operated nearby by Condate Biogas Ltd. The resulting digestate is then tankered back to Pillavins Farm by Condate, where it is stored in a lagoon.

Pillavins Farm lies on the south side of the A361 North Devon link road near South Molton. At the time of the incident, digestate was being spread on fields lying more than 1 kilometre away from the lagoon, on the opposite side of the road.

To reach the fields, pipework took the digestate through a rainwater culvert under the A361. Pumps were used to maintain the pressure needed to push the digestate the long distance.

The court heard that A J Sing and Son Ltd were negligent in that they did not have systems in place to ensure that the proper checks had been made and to ensure that spills were properly dealt with.

They also heard that Ryan Adams was negligent in spreading digestate when rain was forecast and in not cleaning up the spill.

“This was a truly shocking fish kill on a previously pristine salmon river.  It was one of the largest fish kills ever recorded in Devon and Cornwall.”

“Great care must be taken when applying digestate to land. Simple observation of the weather forecast and the forecast of rain should have been enough to halt the digestate spreading.

“Only the right amounts of digestate must be evenly spread over land at appropriate times and when there is a crop or soil need. It should not be spread on steeply sloping land, close to field ditches and watercourses, on saturated or waterlogged land or prior to heavy rain falling. No digestate should be allowed to discharge to a watercourse.”