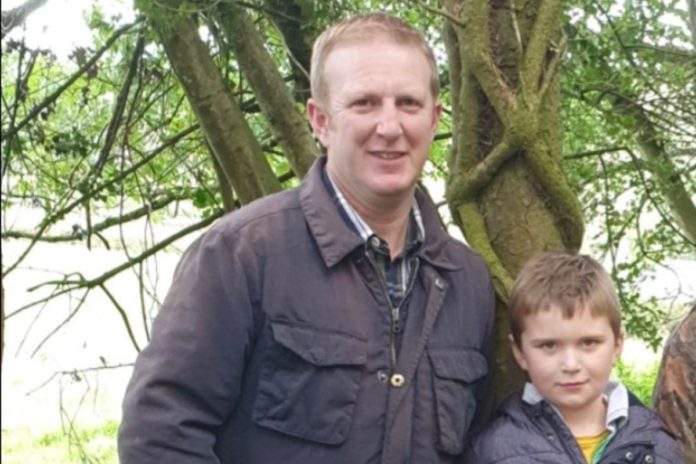 How this farmer saved his 6-year-old son’s life

In May 2019, the Co Tyrone poultry farmer had just received a new batch of chickens.

His son, Ben, then aged six, was excited about seeing the new chickens, so he came with his father to look.

On the way down to the chicken house, Derek stopped at the slurry tank to make arrangements to start mixing it while he and Ben went to see the chickens.

Derek left Ben at a safe distance outside on the yard whilst he worked at the tank for a few minutes.

Weather-wise, Derek remembers it being a nice calm day with no breeze.

After a couple of minutes, Derek checked on Ben only to find him walking towards him with a cut on his head.

Derek’s first thought was that he had fallen and had hit his head. So he lifted Ben and started carrying him towards the house to get the cut seen to.

At that point, however, Ben’s eyes started rolling in his head. After Derek placed his son on the ground, he also realised that he wasn’t breathing. “Ben had been overcome by the fumes from the slurry tank,” he explained.

Fortunately, Derek had been on a first aid awareness course, so he knew to start doing CPR right away.

It took roughly one and a half minutes before Ben started breathing again.

Derek’s message to everyone, but particularly the farming community, is to know the everyday dangers that exist in this high-risk environment.

He advises farmers to avail of the free First Aid Awareness training being offered by CAFRE at present, through the Farm Family Key Skills (FFKS) programme.

In Derek’s own words: “Knowing what to do in those few minutes saved my son’s life.”

“I would never have forgiven myself if I hadn’t been able to save him,” he explained.

Training is currently available as an online evening session, easily accessible by all the family via Zoom, in the comfort of your own home.

Eligible participants completing the training will also be provided with a First Aid kit.

You can find the dates and times on CAFRE’s website.

- Advertisement -
Previous article‘When there was no cement on boots, the farming sector stood up’
Next articleThreats to Irish live animal exports