In this week’s dairy segment, That’s Farming, speaks to Peadar Healy from the Firoda Herd. He discusses his cows delivering 540kgs of milk solids, not opting for sexed semen, calving heifers at 24 months, selling progeny to customers in 32 counties and his view on Irish dairy farming.

At fifteen, Peadar Healy from Firoda left school to help his late father, Ned, on the family dairy farm.

In 1960, his father built the farm by a 55-acre enterprise left to him by his aunt, forming his 8-cow herd.

Today, Peadar, who is the second-generation to take the reins farm with his wife, Maureen, and son, Eamon.

His son, Riche, who is currently in Australia, played a significant role down through the years, with his nephews, Ed and Mike, helping out during busy periods.

The Kilkenny-based farm is over 273-acres in size, with 85-acres of rented land. The enterprise hosts a 105-cow pedigree British Friesian herd.

“In 1983, we had 48,000-gallons of milk quota, and cow numbers would have been small,” Peadar Healy, who played hurling for Erin’s Ownastlecomer, told That’s Farming.

“Once the milk quotas came in, we were snookered because we had to start selling heifers; we could not supply milk. So, we were building up the whole time, and we got to buy and lease milk quota.”

“My father passed away in 2007. He had worked up to three to four years on the farm before he died. We worked as a team the whole way through.”

The family’s herd size has gradually grown to between 140-170 cows over the last 25 years, with 105 cows now dominating the pastures.

“I was looking after the dairy herd from a very young age as regards breeding programmes. My father always wanted to use heavy milk bulls and cows that are capable of milking the whole time.”

Peadar chose British Friesians because of their ease of maintenance, high values as calves and cull cows, performance in terms of protein and milk solids, fertility, and longevity.

“There would be very few cows under 3.50% protein. So, I would be working on protein the whole time.”

“Many cows will make €600-€700 straight out of the milking parlour if they are up to their fifth lactation when they would have matured.”

“British Friesian’s have done very well for us. We have many cows doing 3.8% protein. When we sell cows to farmers with really good land, they hit over 4.0% protein. These would be very good grassland managers and have their cows out early.”

“Nine out of ten heifers we sell are milk recorded. That is why customers come back to us because they can see everything.”

“It would have been unheard of years ago with British Friesian to have pluses in milk and solids. Many bulls would be coming back with the pluses in kgs, milk, fat, and protein.”

“When you can get them up doing that, you are in a good position.”

Their diet consists of under 1T of meal to achieve these figures and a herd EBI of €140.

“This year, I would say we are up a bit more gallons-wise because it was a very good year for us grass-wise.”

“We had the world of grass once we got going. The springtime was a bit late, but we were very lucky that it worked out well. It was getting messy in May, and we just barely got over it.”

“You have to keep tabs on SCC. You want to be culling a couple of the highest cows with milk recording.”

Peadar DIY AIs most of his heifers, and what does not hold to conventional semen is sent to his own British Friesian stock bulls.

They are put in three different groups on his out-farm with different cows.

The farmer genomically tests the whole herd and uses the majority of his own bulls. He felt some bull purchases resulted in larger calves and lost time on the farm.

According to Peadar, this makes it the highest recorded bull for milk in British Friesian.

“If there were good bulls in England, I would bring them in as well. The Irish British Friesians are the top by a long way.”

“The top bull in the UK at the moment was bred by Pat Clearly, in Carrickshock. He has milk, fat, and protein and also has good looking daughters.”

“The PLI works in the UK, but it is not as good as the system in Ireland. You could have a very low milking cow over there with a high PLI. The EBI in Ireland is not perfect, but it is fairly good.” 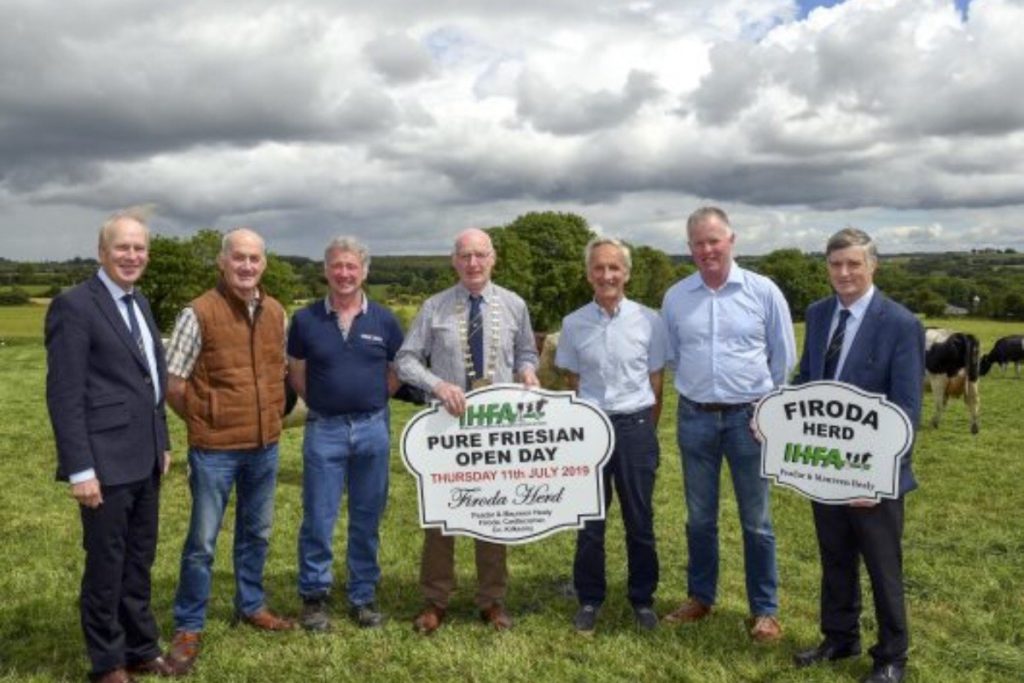 The Firoda British Friesian herd calves from January 1st to April 1st with its average calving interval sitting at 362 days.

The Kilkenny dairy farmer explained why he has opted for this system.

“You have early and strong calves and know for selling bulls and heifers; you have a stronger animal.”

“I would not be too particular on 6-week calving rates. Over 100 females calving in January between cows and heifers is plenty of work for two people.”

“Then, you would be trying to train in heifers and do things right.”

“If a really good cow calved in the middle of April, I would let her work away; she would be calving at a very profitable time of the year.”

“I have no interest in sexed semen because a bull calf is more valuable to me. This is because I have a good market for them.”

“I never mind what way the calf is as long they are alive and healthy. However, that is not saying I might be interested in it in the future as it is probably improving as time moves on.”

“On the other hand, I would have tried sexed semen several years ago, but success would not have been great, but it has improved big time.”

Peadar sells two-year-old calved females off the farm and retains up to 20 females as replacements.

“I do not ever have to advertise. I did not advertise a heifer or bull in years; we have customers who come back to us for stock.”

Peadar believes the three most essential things in farming are “managing your stock, your grass, and your tax“. “If you fall on any of them, you are at nothing.”

He oversees his grassland by spraying paddocks once a year and managing weeds.

“Grassland management is on par with breeding. If you have the best-bred cows in the country and they have poor grass, they will not perform.”

“We do not measure grass or anything like that. We have a herd of cows here, and if they had not enough grass, they would be back in roaring after you.”

The farm makes a pit of silage and 100 bales per year. 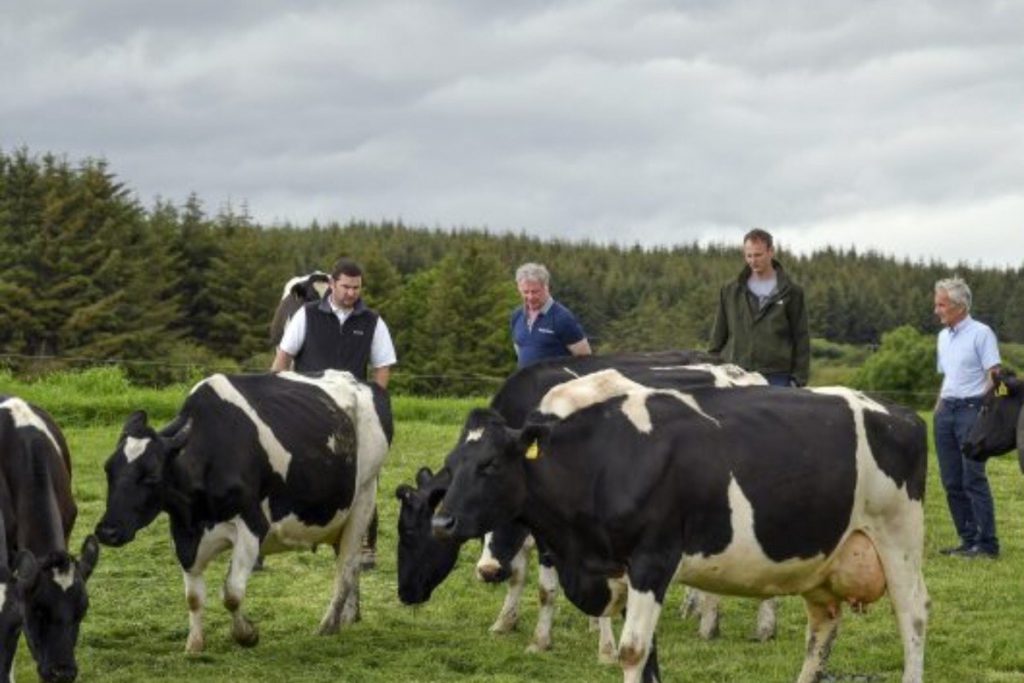 He milks cows twice a day, taking between 75-90 minutes (milking), depending on weather conditions.

“In the 1970s, my father originally installed a 6-unit Manus manual milking parlour, and we put in two extra units some years later.”

Other infrastructures include a 190 cubicle-cow shed (between two sheds), thirteen calving pens with five calving gates, a slatted shed, and straw bedded sheds for calves.

Peadar gets a “great kick” from selling his progeny and having his namesake in many herd’s breeding programmes nationwide.

“At least you can say all your effort down through the years did not go to waste. It was a hobby of mine since I was a young person and also a hobby of my fathers.”

“There are Firoda cows and bulls in every county of Ireland. It is just nice to see it, and I have met the best of friends all over the country.”

“There is a lot of pressure in farming. So, it is nice to talk to someone on the phone from time to time about breeding.”

In Peadar’s view, a considerable workload is involved in this field of work, and it is important to be healthy to manage a large dairy herd.

“TB is always a worry. We vaccinate for many diseases, so that eliminates them. But, there is always something lurking around the corner.”

“If you are facing into a winter and you have nothing, only very poor feeding in the pit, that would cost you an absolute fortune around here.”

“The pressure that comes off you when you have your pits filled with good silage is unbelievable.”

“At least if the cows went inside in the morning, you know there are seven months feeding there.”

“The workload associated with calving cows is colossal, and dairy farming is very challenging, but it is also rewarding.”

Peadar has no intention to increase his herd but plans to make yearly improvements with no target production figure in mind.

“We probably would have the capacity to carry 20 or 30 cows in ideal conditions.”

“But, of course, you will need ideal conditions the whole time, and there is plenty of work to be done with that number to look after them right, especially now with meal gone up €50/t, and fertiliser gone mad.”

Peadar shared his view on the future of dairy farming.

“If dairy farming does not stay good, they are in some predicament with all the investment and new-entrants. Those poor people will be destroyed if milk prices drop.”

“Nobody can forecast what it is going to do because the experts themselves cannot predict that. So, you would be hoping things will stay up there, and milk prices will be good.”

“You are always going to have ups and downs, but you have to take the good with the bad.”

“I am lucky enough that I was well able to cope with hardship because you will get plenty of it in any farming enterprise.”

“You depend on someone to pay you for your product the whole time; you cannot dictate what you get for your milk or your bullock in the factory.”

“The core is at the beginning where we are desperate hard on young people. But, hopefully, with the influx of new entrants in dairying, it will not go wrong,” the Irish Pure Friesian breeder/IHFA member and 2009/2019 IHFA open day farm host concluded.

- Advertisement -
Previous article‘Use a smoke pellet to determine if a shed has sufficient ventilation’
Next articlePlainer cattle easier, but quality lots unchanged at Dowra Mart