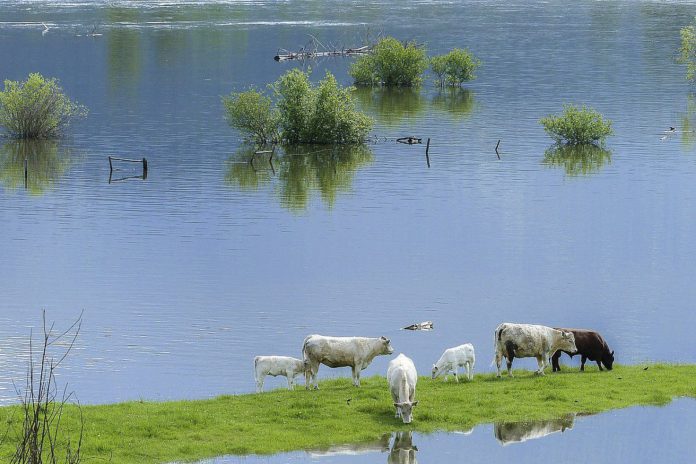 The Beef Plan Movement has announced that it will be making contact directly with farmers impacted by the recent adverse weather conditions, in particular, those farming in areas that are experiencing hardship, as a result of flooding on their farms.

The farm organisation outlined that to date, it has been in contact with farmers in Offaly, Westmeath, Galway, Roscommon, Clare, Limerick and Leitrim, who have been “under siege” from rising floodwaters.

In a statement, the Beef Plan Movement said: “Hindsight is foresight, however, the state agencies have not used hindsight to its full advantage. Once again, we have a recurring flooding problem.”

“The agencies responsible have not put measures in place to mitigate against a global climate crisis, which our government and state have given recognition to.”

“To say that all is being done that can be done, is inaccurate. The river levels, particularly in the Shannon catchment area, affects a large number of our members, whose lands run the length of the Shannon on both sides.” the statement added.

The organisation stressed that the river levels of the Shannon are governed by legislation that dates back to the 1930s.

“The state agencies, OPW, ESB and waterways Ireland have a responsibility and a duty of care to the inhabitants within the Shannon catchment area, for they have influence on the day-to-day running and observation of river levels.”

“Maintaining the river at maximum winter levels is futile, when we have serious weather events.”

The BPM is of the opinion that the minimum water levels should be maintained for the wet winter period from October to March. “Our farming community is bound by Nitrates Directives, which recognise the occurrence of increased rainfall during the winter period.”

“The same is recognised in county council by-laws but yet the OPW, ESB and Waterways Ireland are not held to the same level of account.”

“If any farmer was observed spreading slurry during the closed spreading period, the full rigours of the state would be brought to bear.”

“However, inaction, poor maintenance and incompetence has now led to thousands of acres being flooded along with farmyards and farm dwellings with no consequences for these agencies.”

The BPM said the situation regarding siltation of the River Shannon is “widely known” but has never been addressed by the relevant state agencies aforementioned.

The organisation views financial aid packages for farmers impacted by flooding as a “sticking plaster solution which does nothing to treat the open wound caused by repeated flooding”.

“There is no aid package for farmers, farm animals, home keepers, and businesses in distress. No farmer wants to see their silage, slurry or FYM floating in their sheds or their livestock standing in water.”

“These are the real stress factors for farmers and all inhabitants in the Shannon catchment area and those that bound onto a flooding river.”

“The solution to the problem is to be found in competent employees of the state, who will get the work done, be it relieving pinch points, removing silt, real-time monitoring of the river level, observation of weather patterns, with a contingency plan that mitigates against climate change.”

The Beef Plan Movement asks its members and all throughout the wider farming community to support those impacted.

It is asking people with empty sheds to come forward and said it will seek to negotiate a future derogation for rehousing of livestock on welfare grounds into safe zones.

“Anyone with excess fodder, who can donate if required over the coming days, please contact your county Beef Plan committees to facilitate transport of fodder to fellow farmers located in flooded areas.”

It is also asking hauliers to come forward to help move fodder to areas where shortages are appearing. “Any farmer who needs assistance is asked to contact Beef Plan today.”

“We also ask that people remain vigilant and keep a close eye on elderly neighbours, so that they are fully provided for with food and fuel supplies.” the statement concluded.

- Advertisement -
Previous article
VIDEO: ‘The weather could affect you more so than the price’
Next article
Calls for farms to become carbon-neutral