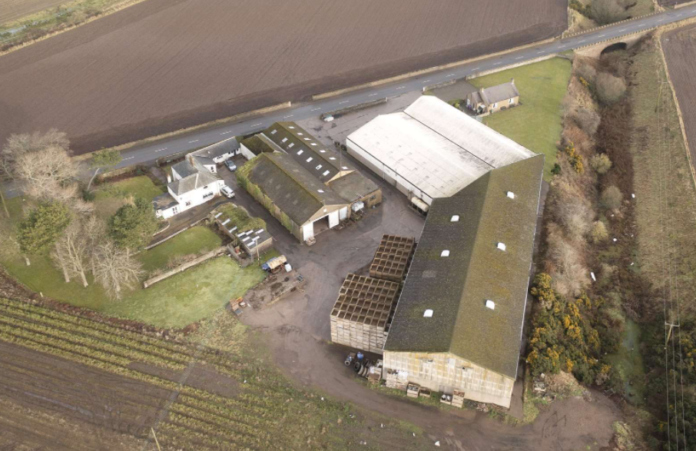 Three “productive and highly accessible” farms amounting to 329-acres (302 of which are arable acres) have hit the market in Scotland in the form of a single offering.

Gilrivie, Tayock and Langley Park are what Savills has described as “productive” arable units in a “wonderfully scenic” location.

The property firm has suggested that the enterprises are “ideally” suited to early potato production and offer redevelopment opportunities.

The property consists of:

The central hub of the farming operation is at Gilrivie. Here, you will find a farmhouse, farm cottage, two large potato stores and a range of traditional buildings.

Besides, at Tayock, there is additional machinery and crop storage. It also has what the property firm believes to be potential for development or diversification projects.

The current owners have farmed at Gilrivie and Tayock since the 1940s. They purchased the additional block of land, Langley Park, in 2008.

The three farms have been farmed in hand, with the primary focus being the production of early salad potatoes, carrots, and spring barley.

They successfully grew other crops such as wheat and oilseed rape in previous years.

For several years, they have rented additional land on a seasonal to produce ware potatoes using the “extensive space” for dressing and storage that the sheds at Gilrivie provide.

You can access all land “with ease” from the Brechin to Montrose Road (A935). At Langley Park, there are internal tracks, both of which allow for easy movement of modern farm machinery.

The farms of Gilrivie, Tayock and Langley Park lie immediately to the north of the Montrose Basin in the county of Angus, on the east coast of Scotland.

The farms are “strategically located” with road frontage close to the local towns of Montrose (3 miles) and Brechin (7 miles).

The A90 dual carriageway provides “quick and easy” access south to Dundee (34 miles), Perth (54 miles) and north to Aberdeen (41 miles).

There is a mainline railway station at Montrose. It offers regular services to Aberdeen and to the south, including a sleeper service to London.

Aberdeen Airport (45 miles) has a range of domestic and European flights. There are direct flights from Dundee to London City Airport.

The county of Angus boasts what the firm described as fertile farmland, sandy beaches in the east and “glorious” heather glens in the west.

The surrounding area is “well served” with agricultural dealers and a successful machinery ring.

McCain has a seed potato business nearby, for which the current farming business at Gilrivie dresses and stores both seed and ware potatoes.

Other farms for sale:

- Advertisement -
Previous article
Retirement prompts sale of 45ac farm with dry land, 80 cubicles & outbuildings
Next article
‘Whilst I was at school, I was told that women cannot be farmers’