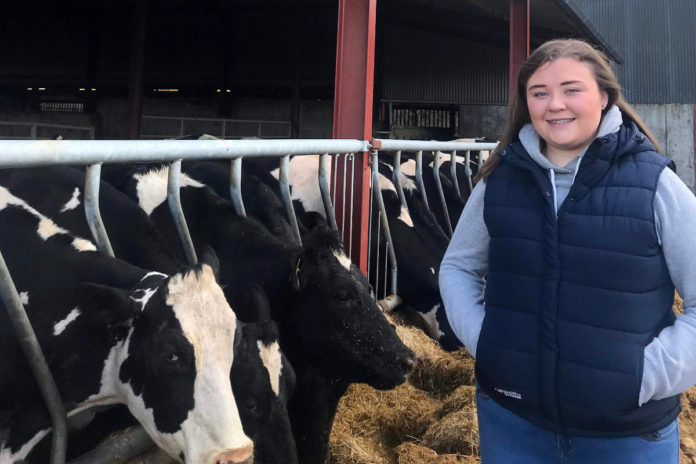 Roisin Scully may have had her heart set on studying radiography, but all was not lost when she was offered a place on UCD’s agricultural science programme.

She accepted her second CAO offer and began her third-level studies last September, following the completion of her Leaving Certificate in 2019.

“Radiography, also in UCD, was my first choice but I didn’t get the points. Looking back, I’m glad I didn’t.” she admitted to That’s Farming.

“It turns out the extra few hours around the yard, rather than with the books, was worth it!”

Her farming roots, coupled with studying agricultural science at second-level, influenced her decision to research the possibility of carving out a career in the sector.

“I looked into agricultural science at UCD and felt it was the best choice as there are so many career opportunities for graduates.”

“I’m really enjoying the course – Semester one was a bit shaky trying to find my feet in Dublin but once I settled in, I never looked back. It’s surpassing all my expectations.”

When she is not in the capital, the 19-year-old assists her father, Dermot, grandfather, Brendan, and younger brother with the running of a beef, dairy and tillage farm in Clonaslee, Co. Laois.

“The farm was bought by my grandad and my dad took over when he retired, along with my uncle, Brendan jnr.” explained the third-generation farmer.

“My uncle, Brendan jnr, owns a tillage farm in Scotland and spends part of the year there. My uncle and grandad also have a turf cutting enterprise which begins in April and runs until June or July every year – weather-dependant.”

The Laois-based farm family have approximately 100 dairy cows and just over 300 beef cattle. The beef enterprise remains to be the biggest part of the farm due to the location of fields and out-farms.

They have increased the dairy aspect of their enterprise at a steady rate over the past number of years and are satisfied with their current herd size.

The majority of their Friesian cows are AI’d, while the remainder are served by either a Friesian or Hereford stockbull; they calve from mid-February to early April.

Bulls remain on-farm and are slaughtered at approximately 30-months, while heifers are retained as replacements.

“We also buy calves from other local dairy farmers at a few weeks-old. They are fed milk, and then concentrates are introduced before they are eventually let out to grass for the summer.” Roisin explained.

In addition to dairy-crosses, which are part of their beef system, they also have Angus-crosses, Charolais-crosses, Limousin-crosses and Simmental-crosses. They also purchase other cattle at Ennis Mart and Ballinasloe Mart.

“They are reared mainly on grass but are fed silage, straw or meal we produce ourselves. Cattle are housed on a mixture of straw beds, peat beds or slats.”

“We buy in some beet and other concentrates like soya hull to help supplement the diet; they are usually fed this for the winter.”

“Some cattle are killed around 24-months and other are kept until they are 30-months and sent with the Friesian bulls – depending on factory demand and what we have ready to kill.”

In terms of tillage, this year they have sowed 50-acres of winter barley and also intend to dedicate 90-acres of their land to spring barley.

Roisin, a member of AgSoc and the winning Great Agri-Food Debate team, said she would like to see more females filling managerial roles in the agricultural sector.

“I can see that change is coming gradually. I think it starts from home – If more girls are exposed to agriculture from a young age, when they grow up, they will happily consider the sector, like I did.”

“There are so many opportunities in the sector – I would be really upset if women were being discouraged from considering a career in ag just because of their gender.”

The 19-year-old said she would like to further her studies beyond a level-8 degree, but the path she will take after graduation remains unknown. “I might find my dream job as soon as I graduate, and I might not.”

“I have a few more years to decide where I want to be. In UCD, work placement is not until third-year, which seems a long way away yet. I have no idea where I’ll go or what I’ll do yet, but may go overseas.”

“As a young person in ag, I have been very lucky to have been exposed to so many new things – both at home and in college.”

“It’s a really enjoyable sector to be involved – it is constantly moving forward, and at my age, there is a thrill in keeping up,” Roisin concluded.