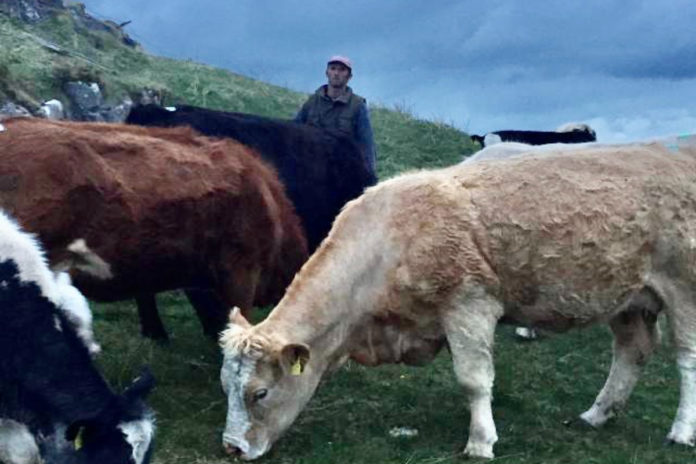 Farming on the edge of the Atlantic poses its own challenges, but David Boyd takes them in his stride.

The Donegal native farms in partnership with his brother Tom, where they keep approximately 40 suckler cows and 80 sheep between them.

“We farm separately, but together,” was the way David described their situation to That’s Farming.

They both have their own stock and their own land right beside each other, but they come together to help each other and work together almost every day.

It can seem like an unusual set-up to many, but Boyd said it works for them.

“It’s the way we were brought up. Mum and Dad both had a herd number and they worked the same way. They managed it and it’s working well for us as well. There are plenty advantages to it,” he explained.

David focuses solely on suckler farming, while his brother has both sucklers and sheep.

The cows are predominantly Charolais and are calved in a split calving system, with some calving in October while the rest calve in the spring.

“I was here on my own for 4 or 5 years and it was easier to work it that way at the time because I had 30 or 40 cattle and was lambing 80 or 90 ewes. It eased the workload and it meant that I had money coming in at different times of the year,” David said.

“Now that there’s two of us, I’m more inclined to go back to spring calving and calve for grass to cut back on costs.”

The autumn calves will be sold from September through to Christmas, while the spring calves will go through the local mart in the new year.

“In general, prices have been good, I can’t complain. There are good and bad days but I suppose we’re living off the back of the live exports. There is a big fear of that disappearing though.”

Their local livestock mart is not that local, however. They have a choice of 3 marts between a 35-40-mile radius of their farm, meaning going to a sale is a day’s work in itself.

Their preferred mart is Milford Mart, which they have found to be the most suited to their type of cattle.

That 36-mile distance to the mart is only part of the geographical difficulties involved in their farming enterprise, however.

“We’re almost 40 miles from Letterkenny and we’re 50 miles from Donegal town so anything that has to come from those two areas are usually €10/tonne extra,” he said.

“Whenever we buy feed or fertiliser, we try to buy in bulk to save on the haulage costs because you usually get a slightly better deal.”

Soil structure is another limiting factor of their farm, which as David described is “pure sand”.

To combat this issue, the fertiliser plan is more heavily focused on phosphorus and potassium than nitrogen, seeing as sandy soils have poor K retention.

“It is very hard to keep nutrients in sandy soil. In theory, it’s very fertile, but in practice, it’s not because the soil doesn’t hold the nutrients. At the minute we nearly have no grass, it’s all burnt.”

Although he admits that drystock farming can be a tough trade, he is a firm believer that it will always have its place on this island, especially in his part of the world.