That's FarmingThat\'s Farming Irelands Largest Farming News, Properties and Classifieds Network
HomeDairyFarming is in the blood of the 2019 Kilkenny Rose 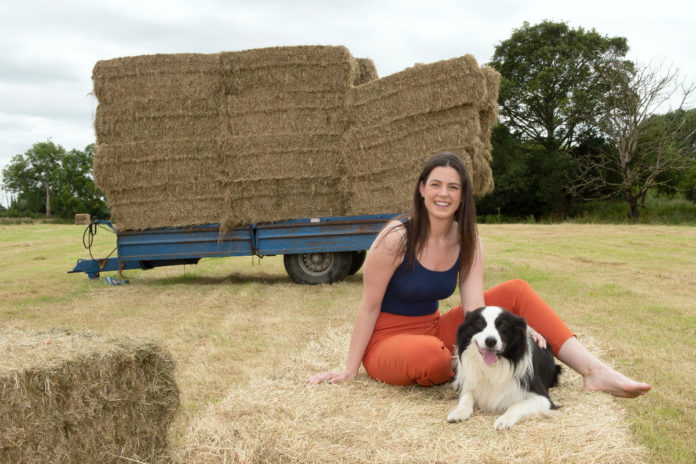 Farming is in the blood of the 2019 Kilkenny Rose

With her time shared between her international hockey career and a master’s degree and representing her county in the Rose of Tralee festival, 23-year-old, Clodagh Cassin, still makes time to go back to where it all began, on her Maddockstown farm in Co. Kilkenny.

Farming is in her blood, as her grandad owned a dairy farm and her father currently farms full-time on their contract rearing enterprise.

The holding was inherited from Clodagh’s grandfather, having originally served as an out-farm. Starting out with sucklers and sheep, they have recently focused solely on contract rearing for local farmers.

They currently keep up to 130 animals each year, consisting of a mixture of calves and heifers.

“It has provided more stability to the farm. We keep calves from three different dairy farmers and the land is split into blocks, so the animals can’t mix.” Clodagh explained to That’s Farming.

“We get the heifer calves at about 12-weeks-old, keep them through the winter, AI them the following April/May and retain them then until November, where they go back to the farmer close to calving down.”

When it comes to the farm, the 23-year-old said that grassland management is what interests her the most.

“We measure grass at home every week – it’s a great way to know what you have ahead of the cows. I like that if we can get the grass right the cows will thrive and also it decreases the amount of concentrates that needs to be fed.”

In following both her agricultural and sporting interests, she decided to enrol in a bachelor’s degree in animal and crop production at UCD.

“I am a very sporty person and UCD has very good sporting facilities and teams. They awarded me an Ad Astra Sports Scholarship and that was a big draw for me.”

“With regards to doing ACP, I really enjoy farming and have a great interest in it, so for me, it made sense to do an ag course in college. I really enjoyed my time in ACP, the ag classes are all pretty close and everyone is so friendly. I made some very close friends that I’m very grateful for.”

She graduated from her degree in 2019 and embarked on a master’s in education, with the hope of becoming a second-level science teacher.

“When I began final year ACP, I started to think about what I’d do afterwards. I worked as a sports coach in schools as my job in college, so the idea of going into teaching was in the back of my head.”

Now working as a student-teacher in The King’s Hospital, she said that hailing from a farming background and having an ag Science degree have stood to her in the classroom.

In 2019, Cassin represented Kilkenny in the Rose of Tralee International Festival. “I kind of figured I have nothing to lose and it would be a bit of fun. Little did I think I’d actually become the Kilkenny rose.”

With the Kilkenny sash over her shoulder, she spent the summer of 2019 travelling around the country representing her county, which was “an experience of a lifetime”.

“It was amazing – I had an unbelievable summer of being asked to attend events. I found it a bit mad that people wanted me there and all I was doing was wearing a sash, nothing special.”

She said the highlight of the whole experience came in the form of new friendships. “It’s just amazing! It is very hard to put into words and is a real ‘you have to be there to experience it’ kind of thing.”

Her long list of achievements includes her international hockey career; she currently plays for the UCD hockey team and has earned a number of Irish caps.

“I’ve been playing most of my life – I started playing a little in primary school with the club in Kilkenny. I started to take it more seriously in secondary school and it’s grown from there.”

She revealed that her biggest achievement to date was earning her first international cap in 2016, while in her second year in college, and has managed to put a few more under her belt since then.

Her plan currently is to finish her masters and then hopefully secure a position in a school closer to home to allow her to spend more time on-farm.

From her time spent studying agriculture, she said that it has opened up so many opportunities and would recommend it to anyone.

“For people who think agriculture is just for farmers, you are very wrong. The industry is so vast that you can literally work anywhere with an ag degree.”

“It allows for lots of different career paths, so it is great for someone who isn’t sure what they’d like to do,” she concluded.