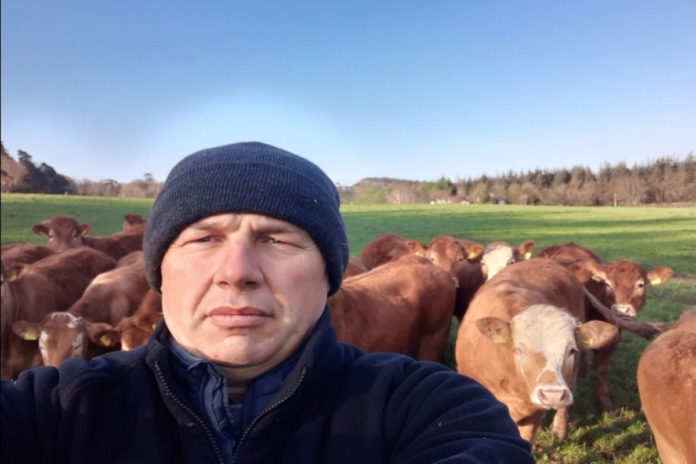 James Kent manages the suckler farm on the Blarney Castle Estate, a working commercial farm on the site of the world-renowned tourist attraction.

The farm is home to 170 suckler cows, predominantly Limousin and Simmental-types.

Originally from a beef and sheep farm in Wexford, James has been working on different farms since leaving school. He spent many years working on dairy farms, as farm managerial positions on beef or sheep enterprises are often hard to come by.

“There was a man that used to buy calves off us for export, David Murphy, and I used to say to him that if he ever heard of a position on a beef or sheep farm that I would be interested.”

“He used to do business here in Blarney and my current boss contacted him looking for someone to manage the farm, so that’s how this role came about. It was a case of who you know, not what you know.”

There are 170 cows that are all spring-calving and they operate a closed herd. They employ a system of 16-month bull beef and heifers that are not used as replacements are sold as stores.

“We decided to finish heifers last year, which was a difficult year for finishing cattle. The lighter bulls that weren’t ready at 16 months were finished around 20 to 22 months.”

The herd is 90% Limousin with one Simmental bulls for breeding replacements and achieving hybrid vigour. The bulls went out at the start of April and will be taken back in the first week of July with an aim to start calving on New Year’s Day.

“We run 7 bulls and, because it’s a closed herd, we have to keep on top of our records to know which cow went to which bull. We run about 25 or 30 cows to a bull.”

“I’m not too sure about how many were kept before I got here but when I started there were about 140.”

“I’ve been keeping about 20 heifers every year to build up the numbers a bit and get rid of some less productive cows. I would say we’re at the optimum number of cows now.”

Despite spending so much time working on dairy farms, James much prefers working with beef animals and seeing the results of the breeding strategy he put in place, despite the lack of reward for it.

“Breeding good quality stock and seeing the results is probably my favourite part of farming. I know we’re not getting paid for results, but you can be proud of what you’re producing. Hopefully, a change will come because good quality herds are getting scarce.”

“In the near future you can’t see much light at the end of the tunnel, but hopefully things will change. A fella at home used to say: ‘You want to stay in while everyone else is getting out’ and we have seen good suckler farms or beef farms gone into dairy and make big investments.”

“I know we’re in strange times with this COVID-19, but the milk could flop altogether, and lads are left with so many expenses then.”

The Wexford man has tried different career paths throughout his adult life, but none have given him the same satisfaction as farming does.

“I had an office job for a while, and it didn’t suit me. I always had a love for farming, so I decided to do the farm apprenticeship scheme. Then I got a job as a civil servant, but it wasn’t for me, so I went back to farming.”

Based on such a large tourist attraction, you would imagine that the farm is run differently to other conventional farms throughout the country. According to this farmer, they actually have very little impact on farming operations.

“The tourists don’t really impact on it as such. We have our jobs done in the morning before it gets busy around here.”

“Similarly, for silage, there are certain areas of the farm that can be only be used after 6 pm when the tourists are gone away, but generally, they don’t impact on us.”

“It’s interesting for the tourist too. We have a few sheep and horses around the estate and you would be surprised the amount of time they spend down at the farm looking at the stock rather than in the gardens of the estate.”

“There’s about 5km of avenues and roadways through the estate that they can walk through.”

“It’s like any other farm, it works the same way only there are tourists walking around during the afternoon.”

- Advertisement -
Previous articleBeef Trade: Base price remains unchanged
Next articleSurge in demand for cheaper cuts could put farmers out of business