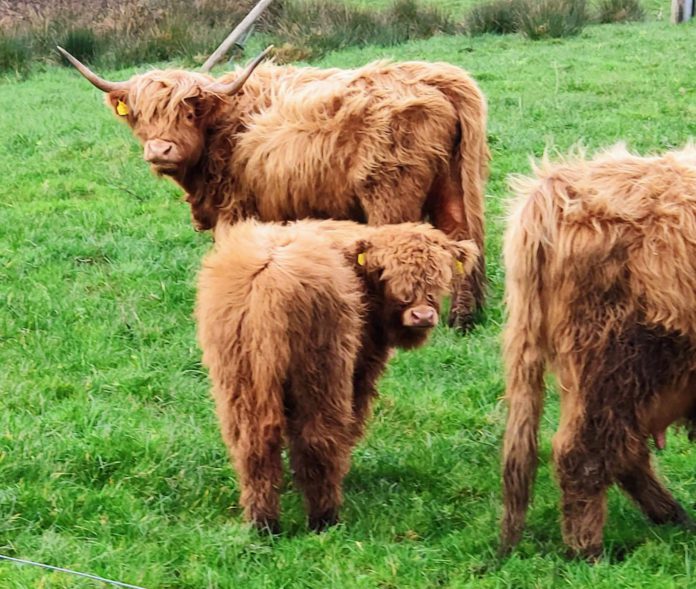 I was recently asked why I selected Highland and Belted Galloway cattle and I think it’s because they were the two breeds that I had it narrowed down to.

I had decided before I got out of dairying to do contract rearing over the summer and had spoken to people and found out something about it.

My aim was to keep cows or heifers from April to the end of September, weather-permitting, and hopefully keep most of the farm payment at the end of the year.

The only other issues I had was keeping enough stock to meet the minimum stocking requirements for the seven-month period and to have stock to graze the rough grazing and mountain which is also a requirement under various payment schemes such as GLAS, ANC or BPS.

I knew that there wasn’t much to be made from sucklers anyway and heather and Molinia grass was not going to put much weight on them, without having to buy a lot of ration.

I looked at other Irish breeds of cattle such as Kerrys, Irish Moileds, Droimeanns and Dexters, which would all have been suitable. Dexters are probably the one breed that I came closest to buying because of their light size and ability to out-winter, without doing too much damage to the land.

I knew that wintering cattle was a costly exercise –especially in Kerry where we get the highest level of rainfall in the country and winter can last over 6-months, especially in poorer type ground where it’s quite common to house cattle from the start of October to the end of April during a wet year.

I wanted some animal with a small frame that would not damage ground too much that could easily out-winter and would be very easy calving that ruled out most continental breeds.

I also wanted something could stay out a lot in winter and would not be bothered by cold or rain, which would rule out some of the traditional breeds, as they are, in my opinion, a short-haired breed of cattle that are traditionally kept inside during the winter.

My choices were narrowed down to two Scottish breeds; Highlands and Belted Galloway. They both have two coats of hair – an outer coat to keep out the rain and wind away and an under-coat to keep them insulated.

The Highland has been known to be around since at least the 6th century and are supposed to be as cold-tolerant as the caribou or reindeer of the arctic. I heard a figure that they are OK to temperatures as low as -30 degrees Celsius.

I also remember of watching a video of a man that kept some in America, who was stating that they eat buck-thorn, which I believe is something like blackthorn.

Highlands are known as browsers which basically means they will nibble on almost anything like heather briers gorse bushes etc.

I originally thought that was an advantage as if grass was low they could forage on things other cattle wouldn’t eat, but the downside to this like someone once said to me that they are like a big goat – they are always up on the ditch which can cause its own problems, especially if they decide to eat a hole in it.

Because of the thick insulated coat of hair, they can sometimes be insulated from the electric fence too, unless there is a very good shock in it.

A bit like mountain sheep though, once they settle into their range on the farm, they are not too bad and for the most part, stay where they belong.

The advantages are they cost little to keep over the winter, will calve unassisted and don’t mind the cold or rain. They are also probably one of the most unique looking breeds of cattle in the world.

Belted Galloways are something similar to a winter-ready Angus or Hereford – a low blocky animal that puts weight on easily and suitable for rough grazing and coarse grasses; they are capable of converting poor quality forage into meat and muscle.

They probably grow a bit faster than highlands two which seem to be a slow-growing breed. They say they taste nicer too and is lower in fat due to their thick coats, but I have not tried one yet and I think all cattle promoters say that about their breed.

Another good thing about the Belted Galloway is that they are polled, so are easier to handle at testing or to sell through a mart.

Overall, both breeds have some advantages over other breeds in my setup and if I manage to keep stocking numbers low, the bills for silage and feed at the end of the year should be very little.

I also know that I have cattle that will thrive over the summer in poor quality grazing and hold their own over the winter without the high cost of feed bills.

If you want to know more about them or the land they are grazing, have a look at my website here.

- Advertisement -
Previous article
Flying trade for breeding heifers at Castlerea
Next article
PHOTOS: Over 85 tractors to go under the hammer