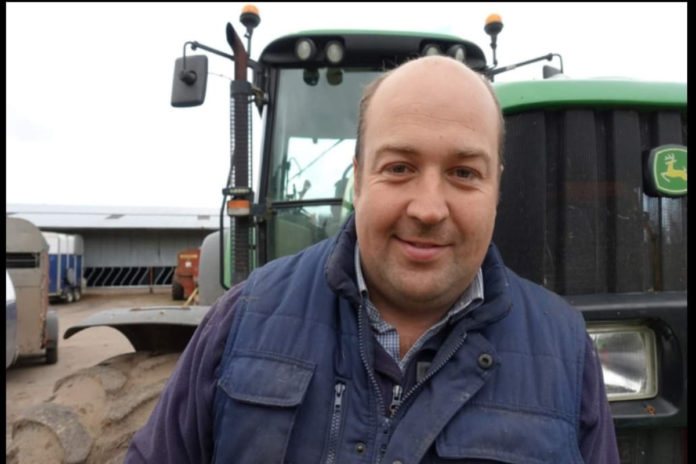 Mark McConnell runs a fourth-generation family farm with his father, Philip, outside Belfast, in Co. Antrim.

The 33-year-old from Mallusk farms their large-scale 600-acres suckler and sheep enterprise on a full-time basis.

The cows are a mixture of Simmental and Limousin; seven stock bulls are used for breeding – Limousin and Charolais for the commercial stock and a Simmental sire to breed replacements.

Breeding takes place in July for calving to begin in late March/early April to ensure that there is no overlap between lambing and calving.

“We start lambing around January or February to get the lambing finished before calving starts.” he explained to That’s Farming.

The ewes are mostly mules, with mainly Suffolk and Cheviot genetics and he uses Suffolk rams for breeding.

Both lambs and cattle are sold through the market as stores. Lambs are usually sold off grass at around 45kg.

North of the border, the marts have been closed due to the coronavirus, similarly to the south, and Mark said it is a very uncertain time for their farm.

“At the minute, we have cattle ready to go, but there’s no market there for them, so it’s very hard to know what to do with them.”

The Antrim man worked away from the farm for a few years before returning home on a full-time basis. He pursued a career as a structural engineer, erecting sheds and farm buildings. With the farm expanding and family circumstances, Mark decided to come home to the farm.

“The farm was getting a small bit bigger and Dad was on his own once my grandfather passed away, so I decided to come home and give him a bit of help.”

“We focus on halving the best cows and the best calves and we’re doing alright. If you’re producing a good Charolais or Limousin calf, you’re getting on well. The better cattle seem to be doing ok. You have to get your numbers up to survive at the minute.”

The McConnells do as much work as they can themselves in order to minimise the amount of money leaving the farm and Mark is of the opinion that this is the key to staying profitable.

“We do a lot of work ourselves that means we don’t need a contractor. We do our own hedge-cutting and silage, for example. We strive to breed good-quality stock as well, so you’re just trying to have less money going out and more money coming in.”

Wind turbines is the next project to begin on the family-run farm as they have decided to venture into the renewable energy market.

“We’re in the process of putting up some wind turbines which will produce electricity to go into the grid. A company got in contact and asked if we would be interested in putting them up.”

“We plan to put three big ones up and it won’t take up much of our agricultural ground.”

For younger people with farms being passed into their hands, Mark believes the key is to enjoy your line of work. “If you want to go ahead and carry on the farm, you should want to be at home. I think it’s something any farmer should want to do.”

“I enjoy this time of the year when the animals start lambing and calving and they go out to grass.”
“We do all our own silage, we bought some baling equipment recently, so I’m looking forward to that to come around,” he concluded.

If you are a young farmer and you want to share your story, email – [email protected]