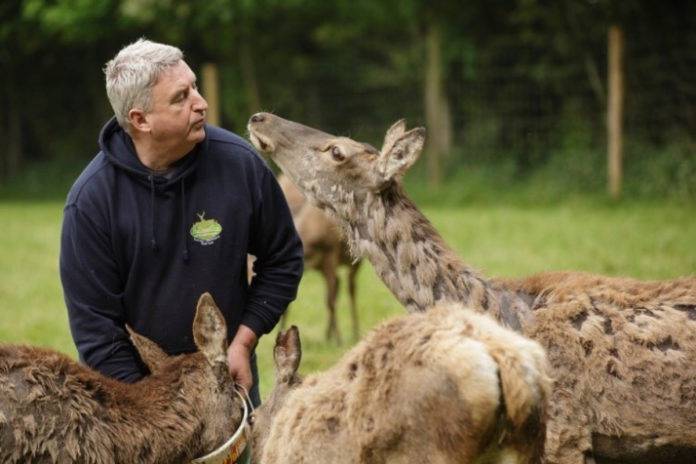 Described as a ‘serial entrepreneur’, Patrick Mulcahy has forged a successful career in farming venison, wild boar and goats, alongside his B&B business called Ballinwillin House in Co. Cork.

The ‘Mindful Farmer’, a Limerick native, is 37 years in business, starting with deer and then reintroducing wild boar to Ireland in 1995.

“They were the first animals in this country that were available to eat, going back thousands of years, so that’s why I wanted to reintroduce them to Ireland,” he explained to That’s Farming.

“There were no wild boar in Ireland up until 1995 when we reintroduced them from Hungary. Then about 10 years ago we brought in the goats.”

Mulcahy began his professional life as a member of An Garda Síochána and started his farm while still serving in the police force. He spent a number of years farming during the day and working through the night. A strong work ethic was instilled in him from an early age.

“But, then again, my father and mother were great workers their whole lives and I kind of inherited that from them.”

“I came from a small farm in west Limerick. We had cows, pigs, hens, ducks, turkeys, everything really. My father was a mobile butcher as well, so we used to go around killing pigs and sheep for people.”

He also credits his father and mother for his love and appreciation for food. “If my father and mother were around today, they would be the likes of the Allens or someone like that because they were real food heroes.”

“Food was everything to them. They wouldn’t kill a pig unless there were 3 inches of fat on it.” Mulcahy explained.

Patrick had the idea of farming deer for a few years before eventually delving into it. The Chernobyl disaster of 1986 provided him with a gap in the market, as a lot of venison at the time was imported from Eastern Europe.

According to Mulcahy, getting into this farming system was easy in comparison to the effort it took to get the Irish people to give the meat a chance. He says it is only in the last 20 years that the food landscape of the country has changed.

“It was that idea that got me into it but it was far from the true achievement because when I started first I was going to supermarkets and trying to get people to try it.”

“I’d give them a sample and they would say ‘that’s lovely, lamb isn’t it?’. Once I told them it was venison, they would almost try to regurgitate it.”

“We’re very traditional eaters and still are. Only for we have some very good restaurants and hotels around the country, that are 5-star or Michelin star, because that’s our market really.”

“It all started to change about 20 years ago and we have built up great relationships with some chefs and some hotel owners.”

“The modern chef is very different, they want to deal with the organic farmer with a good quality product.”

The farm at Ballinwillin House is 100% organic and the majority of the animals live the same way they would if they were wild, with the exception of goats. At present, the enterprise is home to 150 goats, 350 wild boar and around 1,000 deer.

“They are wild but some of them do become tame. The advantage of them being wild and organic is that you have no veterinary bills. Then again, our costs are about three times the cost of a conventional animal.”

One big difference that Patrick eluded to was that the supply of meat is much slower than with conventional animals, especially with boars.

“It’s very different because first of all there’s slow food movement. Your pigs are finished at around 15/16 months, which is about four times longer than a conventional pig would be. You know that when you taste the meat because it’s a completely different product.”

“For the venison then, the animals are killed between 15 months and 21 months. You have to have specialised fencing and specialised handling facilities, so everything is very different.”

He is very fond of goats and said he would consider milking them commercially – if he was at a different stage of his life.

“We would milk one or two of them from time to time if we were experimenting with a bit of cheese. I think if I was younger, or if I had more help, I would milk goats because they’re a beautiful animal to work with.”

The farm is also a key source of employment for the Mitchelstown area. Up to recently, between part-time and full-time, there were 15 people employed there between the butchering, the farming, the distribution and the office.

The Mulcahys opened a B&B on their farm in the early 1990s, with nine rooms available for guests to stay. Hospitality is at the forefront of everything they do and they have set high standards for themselves within their business.

“Up until recently, tourism was rampant in Ireland. We were turning people away all the time. We would have very high standards and we get a lot of repeat business from all around the world.”

“Hospitality is hospitality and if you’re in it you have to be fully in it. I was reared with that from my parents, even though we didn’t have a B&B, the house was at a crossroads and there were people in the house all the time.”

The B&B is about 40% of their business while the meat and wine make up the other 60%. With COVID-19 putting a handbrake on both industries, the Limerick native is very worried about the future of his business.

“This could bust us completely. We have enough reserves to keep us going for 6 or 7 weeks to feed the animals but if something doesn’t happen, I don’t know what we will do. It’s a serious worry.”

The artisan producer is very humble and very grateful for everything he has, and this really shone through when speaking to him. He said he often wonders how it all happened, but nonetheless is eternally grateful that it did.

“I never set out to do what we’re doing today, especially at the intensity we’re doing. I always wanted to be a farmer deep down and thankfully, things have worked out the way they did.”

“I have a great family, great farm and business and great friends. I’m very thankful because I feel so lucky,” he concluded.