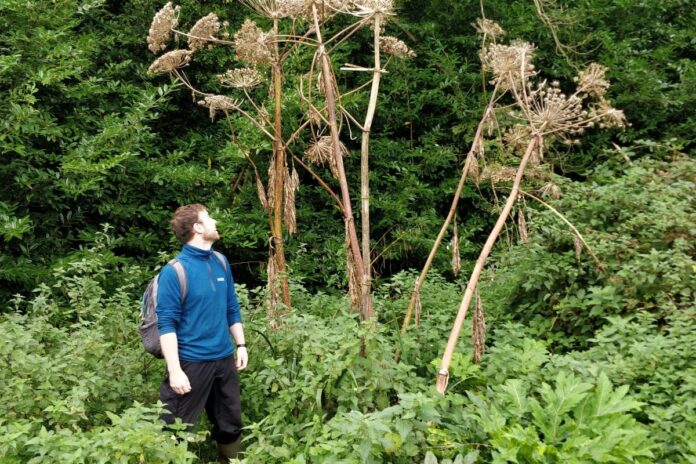 Spraying Giant Hogweed early in the season is a method a group of farmers in the south of the country are deploying to bring the invasive species under control.

This, according to reports, is most effective as plants are small, and are at a stage where they require the least amount of spray, meaning it reduces the impact on other plant species in the area.

The measure is at the core of a programme – Bride Valley Invasive Alien Species Project – which is underway to control such infestations in the south of the country.

Cork County Council has been working alongside the BRIDE Farming with Nature team since 2019 to survey, map and address the issue of invasive plants.

The Bride Valley Invasive Species Project is now targeting a 5km stretch of the River Bride in the east of the county – from Castlelyons to the Metal Bridge and Ballyrobert – following the completion of the survey and mapping phase.

Both parties have produced documentation, entitled Bride Valley Giant Hodweed Information Leaflet, to provide “best-practice” guidance notes for landowners who wish to carry out the treatment themselves.

Giant Hogweed is a perennial plant, which was initially introduced to the British Isles in the 1800s, and poses “a serious” hazard to human health.

It was introduced to Ireland in the 19th century as an ornamental plant for gardens, before it quickly colonised and became a ‘high impact’ invasive species.

Now, in Ireland, it is one of the highest impact non-native species in Ireland with a risk assessment score of 19.

It is what the Mayor of the County of Cork, Cllr Danny Collins, described as a “particularly nasty species”.

He said that “this [above treatment method] will not solve the problem in one year and that a follow-up programme will need to be carried out by landowners for a number of years – depending on the severity of the infestation on their land”.

The sap – which contains furanocoumarins – can cause a nasty irritation when it comes into contact with human skin. It can eliminate the skin’s ability to protect itself from sunlight which means that significant blistering can occur when the affected area is exposed to the sun.

A spokesperson for the project said: “Giant hogweed represents a significant health risk to anyone coming into contact with it. The sap causes severe skin burns, scarring and even blindness.”

Giant Hogweeds can grow up to 5 metres tall, outcompeting native plants while its root system can undermine riverbanks leading to erosion and bank destabilisation.

It can live for 3-5 years, after which time it sets seed (around July/August) and dies.

A single plant can produce up to 50,000 wind-dispersed seeds and because of its vegetative means of reproduction, it reproduces entirely by seed.

The seeds also float and are readily dispersed along watercourses allowing the plant to extend its range rapidly downstream.

According to the information leaftlet, 59% of seeds are within the top 5cm of the soil and so can easily be transported on boots or vehicles.

It suggests that ideally, infestations should be fenced off leaving a buffer zone of 4m around stands – 90% of the seeds are within 4m of the parent plant.

Giant Hogweed seeds are readily carried by water and have a germination rate of over 85%. This, the leaflet indicates, means that it is important to commence treatment at the location highest up the river catchment where Giant Hogweed has been recorded.

You can find more information via the leaflet.