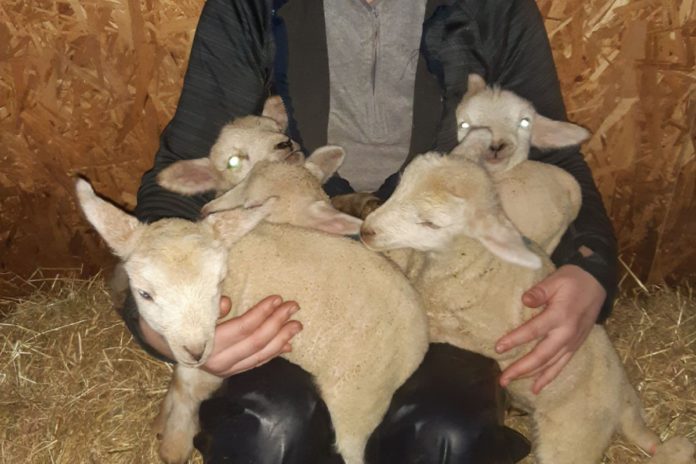 A farmer, who lives on the Monaghan/Louth border, is celebrating the arrival of quintuplet lambs.

Three Charollais-sired rams and two ewe lambs were born to a Suffolk-cross-Texel ewe on Clodagh Hughes’ farm at approximately 11:30pm on March 10th.

Speaking to That’s Farming, she said: “The 4-year-old ewe was scanned at approximately 80 days by Westley Breaden of Topscan sheep scanning, Co. Monaghan and he spotted the five.”

“The ewe needed no assistance – it’s her third lambing and she’s had triplets the last two years. One of her daughters lambed this year and had triplets.”

The ewes lambed all five within an-hour-and-a-half. “I couldn’t believe she was scanned with five – never mind actually lambing down five healthy lambs. As I only had 23 ewes this year, those odds seem quite impressive!”

The lambs are thriving and healthy, but unfortunately, the dam rejected four of them – they are being fed using an automatic milk feeder.

“They were by no means tiny, but I had issues with two of them regarding knuckling of the lower limbs. After some fancy homemade splinting, they have thankfully straightened out perfectly.” the sheep farmer explained.

“The ewe is in fine health, obviously needs to put on condition and mind her one lamb. Incidentally, it’s the first lamb she had that she kept.”

Lambing finished on the Clodagh’s farm on Wednesday, March 18th. “I’m passionate about my sheep’s nutritional and husbandry needs throughout the year and was watching any of my ewes who were expecting multiples like a hawk.”

“I gave them one dose of twin lamb supplement 3 weeks before lambing, other than that, they’re on very good hay and mineral licks with a small meal ration,” she concluded.