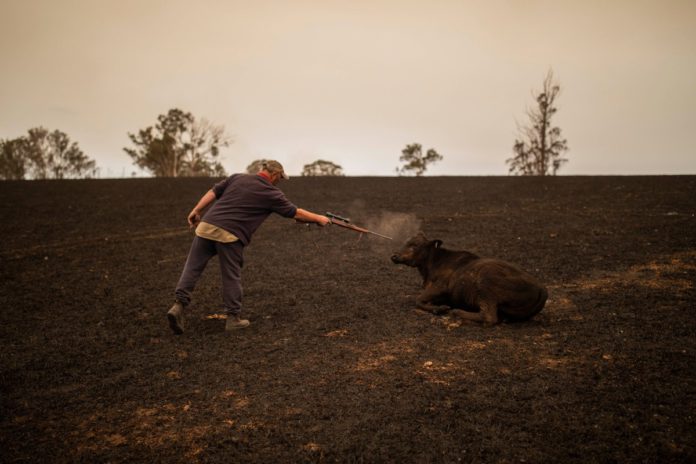 A farmer was forced to shoot a number of his cattle after a bushfire raged through Coolagolite, Australia on New Year’s Eve.

This picture of Steve Shipton shooting one of his animals “went around the world” from Australia to the USA, Europe and Asia, according to Sean Davey, the photographer, who captured the imagery.

“I met Coolagolite farmer Steve Shipton on New Year’s Day 2020 as he was culling injured beef cattle that were so badly burned that they couldn’t get up, let alone survive.”

“Many cows lay dead on burned ground, but Steve – like many farmers – had the gruelling task of culling a number of cows and calves that were still alive. His favourite cow that he had for 13 years also died in the fire.” the photographer added.

Lost approximately 10% of the herd

Steve and his family lost approximately 10% of their herd. “Steve told me that each calf was worth anywhere from $700-$1000, plus the unborn calves.”

The photographer has created a GoFundMe page to raise funds for the Shipton family and the community of Coolagolite.

Davey explained that one of Steve’s friends, who drove 700kms with $10,000 of hay as a gift for the family, inspired the campaign. “I know that a lot of people are hurting, many have lost homes and worst of all lives have been lost.”

“Steve wouldn’t agree to crowdfunding for him, no one I’ve met here on the South Coast would, I imagine.”

“In the words of people we have met who have lost everything, ‘there’s someone worse off than me’. I’m sure that any money raised from this effort will be shared amongst the Coolagolite community.”

“Of that, I have no doubt. I know other people are suffering also, and that Steve isn’t special in any way compared to all his neighbours who I didn’t meet and who weren’t photographed. He will be the first to tell you.”

The photographer explained that not only has the community been affected badly by the fire, but they have also been battling the extreme drought that “everyone” in rural and regional Australia is facing.

“I’ve never started a crowdfunding campaign, but today I decided that I should at least try. I’m not sure how much we’ll raise, but here it goes. I’m starting it off with my own contribution, so at least that’s something.”

He has set an initial target of $20,000, which, he explained, will help provide immediate relief for feed and water, diesel, mending fences on properties and other basic items.

“Many people have lost homes, and as I said, people have been killed. And it’s not over yet.” he concluded.

- Advertisement -
Previous article
Weather 2020: What’s in store this weekend?
Next article
‘The only way a farmer knows if a paddock is fit for grazing is to walk it’