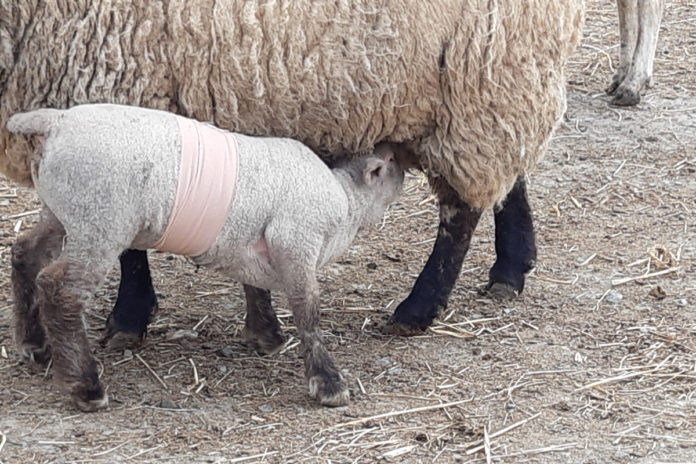 Clodagh Hughes runs a sheep enterprise on the Monaghan/Louth border near Inniskeen; she is That’s Farming’s newest contributor and will provide an insight into her farm on a weekly basis.

I’m kicking myself I didn’t act sooner with this wee ewe lamb! She’s about 2-and-half-weeks-old now and a great strong lamb.

Recently, I noticed a small swelling around her navel and due to both not realising what it was and also hoping it might rectify itself I missed a small umbilical hernia.

My first impulse was to strap a bandage around the lamb’s middle but, I decided to contact my vets for advice.

After a quick check over, the vet advised that it was a small hernia and that given time, the issue could very well resolve itself.

He told me it was just a wee bit of fat that was extruding at the umbilical opening and not anything more sinister such as the lamb’s intestines, I was relieved!

The vet informed me that as the lamb grew bigger and stronger, the fatty extrusion would most likely correct itself by being ‘sucked’ back up and the stomach wall muscles should strengthen and contain it.

And to speed up the closure of the hole at the umbilicus, he also suggested putting a firm bandage around the area. Another piece of positive news was that the size of the hernia had not changed in over a week so the vet was quietly optimistic that it had gotten as big as it would.

Initially, I had intended to keep this wee ewe lamb as her mother has had 2 sets of fine ram lambs and I was hoping for a ewe lamb this year. But, unfortunately, that may not be advisable now as hernias can be hereditary, or caused by over-enthusiastic licking by the ewe at birth.  I’m going to reassess this thought in a few months.

Anyhoo, I was happy it wasn’t serious as she’s still a great strong lamb and I had a bit of fun trying to wrestle with her to get a nice firm but comfortable bandage around her midriff.

I used stretchy bandage I’d had for a previous injury myself as this will allow her belly to expand and not choke her.  I made wee bandage clasps out of the yokes that keep your bread packaged freshly. I’m quite proud of myself.

Of course, all the other lambs are now insanely jealous and now everyone wants the latest fashionable item on the spring 2020 lambwalk.

I’ll hopefully see a good improvement in a couple of weeks and will let you know how I get on.