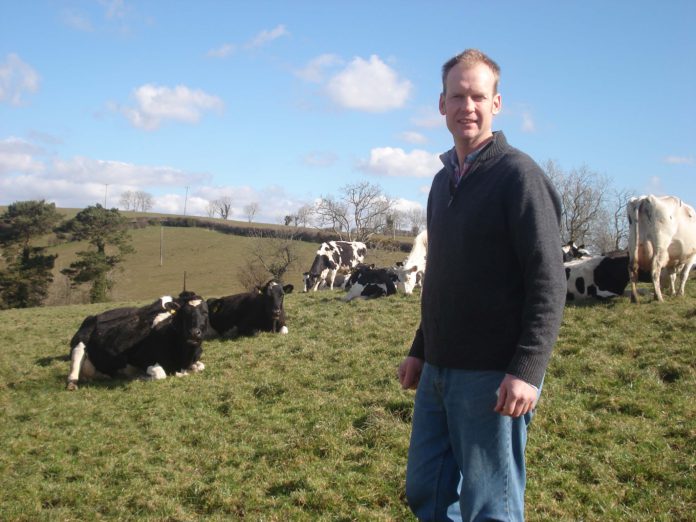 Robert Bryson from Loughbrickland is undertaking measures to reduce the carbon footprint of his 210-cow dairy herd.

The farm consists of Holsteins with an annual milk yield of 9,600 litres from 2.5 tonnes of concentrate per cow.

The CAFRE dairy business development group member carried out a carbon footprint in 2018 as part of the Dairy-4-Future project.

Robert’s dairy enterprise’s footprint was calculated at 0.99 kg of CO2 equivalent per kg milk corrected to 4 % fat and 3.5 % protein.

According to CAFRE, this is “well below” DAERA’s Farm Business Survey average of 1.24.

Methane is the biggest GHG and is responsible for about 50% of emissions, so milking top-performing healthy cows for as long as possible will help lower the foot-print.

Firstly, Robert has a replacement rate of 22% and a calving interval of 385 days. He aims to breed cows that will last at least four lactations.

His average lifetime performance per cow is currently 40,000 litres, compared to the NI average of 23,000 litres.

Nitrous oxide is the next biggest GHG on a dairy farm. Spreading slurry and fertiliser, are the primary source, accounting for about 30% of emissions on NI dairy farms.

Nitrous oxide is about 300 times more potent than carbon dioxide.

Robert has been using low emission slurry spreading and spreads most of the slurry from late February to May. He keeps fertiliser use to a minimum by spreading to crop requirements based on soil analysis and by maintaining optimum soil pH.

Concentrates contribute approximately 10% of GHG emission from dairy farming. Robert targets his concentrate feeding by feeding-to-yield in the parlour only with silage easy fed ad-lib. Robert’s feed rate is currently 0.26 kg per litre.

Robert aims to maximise his milk from forage (MFF), which stands at 3,900 litres per cow. According to CAFRE, this is above the benchmark average of 1960 litres.

Robert aims to have all cows out by the end of February for 2-3 hours grazing and out full time by the end of March. Silage quality is paramount to maximise MFF.

The remainder of the emissions in the form of carbon dioxide are from electric and fuel use.

CAFRE states that about half the energy costs for dairy farmers are associated with milk cooling and heating water for cleaning and operating vacuum pumps.

Furthermore, farmers can reduce electric use by using a heat exchanger to recover the heat released from milk cooling.

Besides, using solar PV panels to heat the water could also be considered, and using LED lighting, which Robert has already installed.

Brian Finch, CAFRE agri-environment advisor, stated that one environmental issue on the horizon is climate change and how dairy farms can reduce their carbon footprint.

“With more environmental pressures on farmers and direct support likely to change in the future, it will more important than ever that farm businesses aim to be sustainable both economically and environmentally.”

“In Northern Ireland, there is a wide range of production systems, from total confinement to spring calving grass-based systems.”

“Studies have shown there is more emission intensity variability within a production system than between systems, perhaps as much as 30%. Maximising efficiency within a system is more important than the type of system used.” Finch concluded.