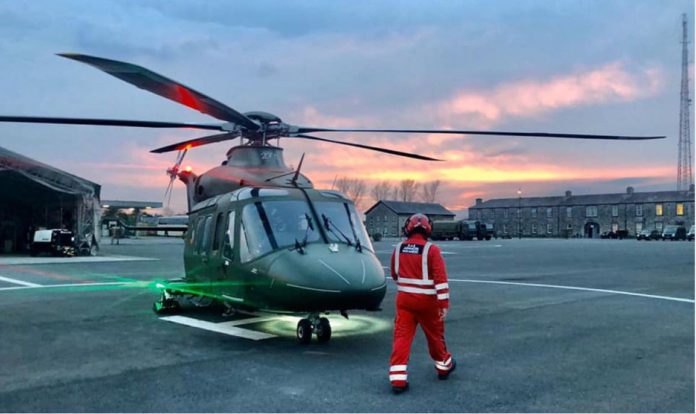 A farmer in Co. Clare was airlifted to hospital yesterday (Tuesday, September 29th) following an incident involving a tractor.

Air Corps 112 was deployed to the scene of the incident.

In a statement to That’s Farming, a spokesperson for Air Corps 112, said: “Air Corps 112 was tasked to a farming incident in Co. Clare.”

“A tractor, while driving on a road, suffered a mechanical failure, causing it to overturn.”

“The driver, who suffered a suspected head injury, was airlifted to a Neurological Specialist Centre in University College Hospital, Galway.” the spokesperson concluded.

In a post on social media, Air Corps said: “The patient was airlifted to UCHG, a journey that took 8mins by air as opposed to 83mins via road.”

“This patient was the 3,000th patient to be airlifted by EAS since the service began in 2012. Based out of Custume Barracks in Athlone, the Emergency Aeromedical Service is a joint venture between the Ambulance NAS and Defence Forces providing a dedicated AW139 for the rapid transfer of critical patients to the most suitable hospital.”

- Advertisement -
Previous article‘For the past 25 years, our annual breeding heifer sales have gone from strength to strength’
Next articleSome basic stretches to loosen up for winter

‘Dad finished on a Friday, and I took over on Monday’- Thurles Mart manager

‘I would say contracting is going to get harder’ – ag...