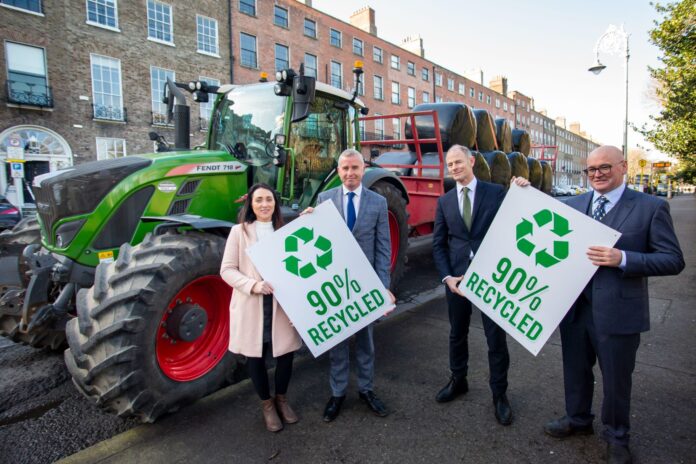 According to the Irish Farm Films Producer’ Group (IFFPG), Irish farmers achieved a record 90% recycling rate for farm plastics in 2021.

In doing so, farmers recycled the equivalent of plastic from 18 million silage bales.

The group collected the majority of this plastic at over 200 bring-centres, which it held throughout the summer at marts, co-ops and agri-merchant premises.

According to the group, this also boosted the circular economy objectives in Ireland.

It supplied over one-third of collected material to Irish recyclers for processing into a range of new products.

The group stated listed the following reasons for record levels of recycling can be attributed:

According to the group, for the average farmer, who produces 300 bales of silage, the total recycling cost is approximately €60.

Meanwhile, the average distance to their local bring-centre is only 11 km.

A spokesperson said: “These factors, as well as a desire by farmers to be environmentally responsible, have resulted in the recycling rate for farm plastics being consistently the highest for any plastic waste stream in the country.”

The not-for-profit body has recycled over 400,000 tonnes of this waste since its establishment in 1998.

The farm plastics industry and farmers fund the scheme, which has the Minister for the Environment, Climate and Communications’ approval.

As highlighted above, last year, IFFPG supplied one-third of what it collected to two Irish recycling facilities:

“In 2021, the company recycled 6,000 tonnes of farm plastics waste into pellets for sale to manufacturers of new plastic products such as refuse sacks and garden furniture.”

“We are currently upgrading their facility to recycle even more farm plastics waste this year,” Carolan concluded.

- Advertisement -
Previous article
Detached cottage in need of refurbishment on just under 1ac for €250k
Next article
Carbon credits: Will patience pay for farmers?