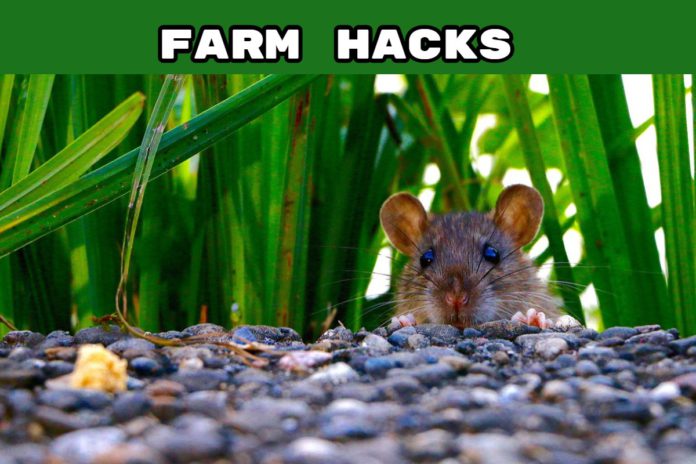 Many farmers have reported an increase in rat sightings around their farmyards in recent weeks, due in part to feed supplies been kept there.

Using rodenticides on a farm, especially where there are smaller and pet animals, can prove extremely dangerous. This is why many farmers are now seeking other alternative methods of ridding rodents from their property. Check out the number of different home remedy rat deterrents below!

1 – Dried Urea – Did you know that Cow dung is a natural rat repellent? When ingested by the rats, they become extremely ill and begin to vomit, eventually resulting in death. To keep rats away, simply place an old cow ‘pat’ near where some recent rat droppings have been discovered.

2 – Mothballs – Mothballs are actually useful in keeping both rats and mice away. They are poisonous not only to the rodent but also humans, therefore be careful when using Mothballs. Again when using this method, simply place moth balls near any area where rats may be located on your farm.

3- Peppermint – Seeing as rats have a highly sensitive sense of smell, using fragrant plants, herbs and oils are a good way of keeping them away. One such smell which they despise is peppermint. Like the previous methods, Peppermint oil (On cotton balls) or tablets should be placed near where rats have previously been seen or where you know they reside.

This should push them out and keep them away as peppermint will instantly affect the lungs of the rat, killing them in the process. Minty toothpaste is also another option, while others have used other fragrant oils such as caster oil, clove oil and other fragrant products such as toilet cakes. Another option is pepper from the kitchen which produces a pungent aroma which rats detest and once they inhale it into their lungs they die.

4 – Bay Leaves – Rats are attracted to the sweet smell of bay leaves, which is what makes them the perfect trap as Bay leaves are highly toxic to rats. Once ingested they will die. Like all of the other methods, placing bay leaves in areas where rats frequent will help keep them away and at “bay”.

5 – Vegetables – Certain vegetables can also be used effectively to keep rats away. Onions are one such vegetable which have a pungent smell and one which rats and mice hate a lot. They will instantly run away from the smell, making it an effective method.

Peppers are another vegetable which can prove effective as it contains Capsaicin, which is the compound that gives peppers their heat. This heat is also a natural rat deterrent.

6 – Ammonia cleaning products – Sticking with the sense of smell theme, ammonia cleaning agents make for excellent rat repellents. To use, mix 2 cups of ammonia with 200mls of water and 2-3 spoons of detergent and place in a bowl near locations where rats are commonly found.

Ammonia is a super cleaning agent, but it acts as an excellent repelling agent to the rodents.

7 – Owls Feathers – A natural predator of rodents, using owl feathers which have been placed all over your farm will ensure rats and mice do not want to stay there long. Using human hair is also another useful option, as rats and mice tend to stay away from predators.

Other Options – There are many other options available, such as catch and release traps, electric shock traps and much more.

Some farmers also use sound as an effective repellent. Sharp sounds are hated by rats and rodents, causing death on most occasions. Another two options one could use is Baby powder and baking soda. These can both be sprinkled in areas where rats reside, though are not as effective.

One final method used by some is Plaster of Paris. When you mix 100gms of plaster of Paris with 100gms of cornmeal, you created a homemade rodenticide.
There you have it, there are plenty of options available to farmers to help keep rats and mice at bay. No need to jump for the rat traps quite just yet.

- Advertisement -
Next article
VIDEO: Clean 1-acre of land in under 10 minutes!