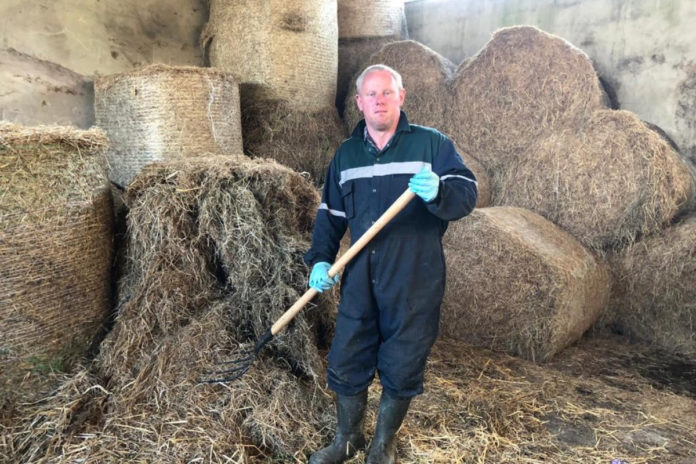 After taking over the home farm in 2013, Alan Clarke decided that milking cows was the way forward and the system that would reap the most rewards for him.

He currently milks 50 cows through a 6-unit parlour in Stradone, Co. Cavan, but it took a lot of time and resources to get to where he is today from a starting point of 19 dairy cows and 10 suckler cows.

The change began after he purchased neighbouring land and expanded the grazing platform by 18.5-acres.

The following years were spent installing roadways and linking them up to the existing platform. The project is nearing completion, however, as Alan has begun reseeding much of the ground to improve the sward performance.

“It took a lot of investment, but it’s the way forward, I think. You need 50 cows nowadays to survive in a one-man setup,” he explained to That’s Farming.

Even in the last year, more change has occurred, as he has increased from 36 cows to 50 over the space of 12 months, after purchasing a number of heifers last year.

“It has made a big difference to my workload. It’s a busy day, especially when they all calved 2 or 3 weeks ago.£

In order to manage his workload as much as possible, the Cavan native has been attempting to keep the calving season as compact as possible.

“I started calving on January 26th and finished on April 21st – It was fairly compact. It could be better but it’s improving every year.”

“The first 25 came together and there was a bit of a lull then. I was happy enough, but I wouldn’t let that lull happen again.”

“My cows are mainly Friesian, but I bought a few crossbred cows a few years ago and I used Jersey straws on the heifers last year, so the first Jersey-cross calves landed this year. From those heifers, I had 13 heifer calves and 12 bulls.”

Although he does not have enough Jersey-cross cows at the minute to see a noticeable difference in production, Clarke said it was the influence of his discussion group that led him to continue trying them.

“There are local farmers who have them and their figures are far ahead of the Friesian. They seem to be the way forward, so I think it’s worth a try.”

With the calving season finished, the focus on this farm has turned to breeding. Alan usually starts breeding in the middle of April, using AI for the first 6 weeks followed by the Aberdeen Angus stock bull until the mid-July.

“Some people will say it’s early, but it means you get milk in the tank earlier next February,” he said.

Prior to the start of breeding, he had already decided to increase the cow numbers for a consecutive year. “Next year I intend on milking 54, so 9 rows of cows.”

“How big I go will all depend on how the reseeding goes and how much grass I have. I’m having no problem feeding 50 at the moment, so 54 shouldn’t be a huge step up, in terms of grass anyway.”

As eluded to previously, Clarke’s involvement in a local discussion group has played a huge role in the decisions he makes and has changed his outlook on farming completely.

On joining the group, he explains: “I joined around 2015. It was a mate of mine that wanted to go so I went along with him. Initially, I wasn’t that interested in it because I’m a fairly quiet person and wouldn’t be inclined to say an awful lot.”

“Since then, I have learned an awful lot from it. A lot of management skills, grassland management, breeding. I left Ballyhaise in 1997 and when I took over the farm it was 2013, a lot had changed in that 15-year gap.”

“You pick up something new every time you go and it’s only an hour every month. It’s a social outlet as well.”

Being away from the farm for 15 years did not change his love of the land, and the 40-year-old said that he has absolutely no regrets since taking over from his father.

“To be your own boss was a big thing, working on your own time 7-days-a-week. I’m much happier, I would never go back to working off-farm.”

“It’s not a job, it’s a lifestyle, and happiness in life is worth more than money,” he concluded.

- Advertisement -
Previous articleWin 5-acres of pit silage or 50 round bales for €20
Next articleWeather: No stoppage to silage season