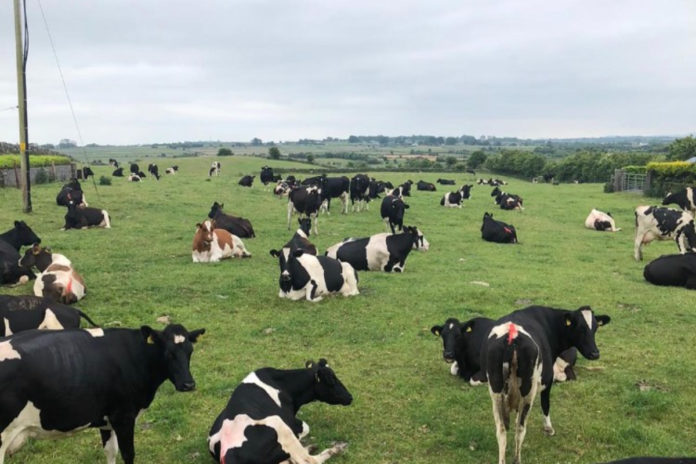 Looking back over the last 15 years, Alan Coleman never imagined that he would have come as far as he has.

When he took over the family dairy farm in 2005, he was milking 30 cows in a 4-unit parlour alongside a calf-to-beef system.

The expansion of the herd has been facilitated by the acquisition of 3 nearby parcels of land. The first was purchased 7 or 8 years ago, while the other two have been obtained in more recent years.

It was when that first piece of land came up for sale that the thoughts of expansion really came to the fore.

“When the first bit of land came up for sale and it was right beside the dairy, it was very hard not to buy it. It’s not often that land comes up that’s within walking distance of your cows,” he explained.

“There was a good bit of work with infrastructure when I took over the land, but we had some of it rented before and thankfully there was roadways through it.”

The farm is currently what he describes as a ‘half dairy, half beef’ system, but this won’t be the case for much longer.

Coleman is a liquid milk producer for Aurivo, which allows him to calf and milk his cows all-year-round.

“They start calving in September and there’s still a few calving now. We have always been milking all-year-round and, to be honest, I know no different. The main thing is you can keep on top of the bills all-year-round,” he explained.

To suit this system, Holstein Friesian cows were the breed of choice, although this wasn’t always the case.

“I was using British Friesian when I was focusing on producing calves for the beef system, but I’m gone Holstein now to increase production.”

“I bought a good few pedigree Holsteins from a dispersal sale and they worked out really well, so I decided to keep breeding them and I plan to continue doing so.”

With such an increase in numbers over the last decade, you would think that the workload on the farm would have tripled, relative to the jump in cow numbers. However, the Mayo-native has found that it hasn’t made a huge difference at all.

“The biggest reason for that is that I went from a 4-unit to a 10-unit a few years ago.”

“It’s actually quicker now to milk 100 cows than it was to milk 40 cows back with the 4-unit parlour. The extra 2 or 3 lines of cows doesn’t make a huge difference when you have a good parlour.”

Leaving beef farming behind to focus on dairy has been a common theme on farms around the country in the last decade.

For Alan, it wasn’t a difficult decision to make as he looks forward to the future.

“I definitely see a bright future for dairy farming. There are not too many fridges around that don’t have a dairy product in them,” he said.

“It’s such a fast process as well, from when it leaves the farm to when it ends up on a table in comparison to beef. It’s exported to so many different countries and the demand is always there for Irish dairy products,” Alan said.

As he turns his focus to his future in dairy, ‘never say never’ was the phrase used when asked about further expansion. But, as things stand, consolidation is the main concern for the next few years.

“I think I have enough at the minute and the main plan is to get that working to its full potential. It took a lot of investment and if I get all of the land reseeded and everything I have now in good order, I’ll be happy,” he concluded.

If you want to share your story, email info@thatsfarming.com

- Advertisement -
Previous articleLooking for love after lockdown?
Next articleFire breaks out at animal by-product rending plant